I have been wanting to do one of these for a long time and decided to finally tackle it. I made the star field in photoshop and am still working on it. I also made the planet texture in Photoshop. The ring texture is a cross section of Saturn’s rings and I plan on making my own just to learn how to do it.
Work in progress of course and am looking for suggestions. There will be alot more added of course. 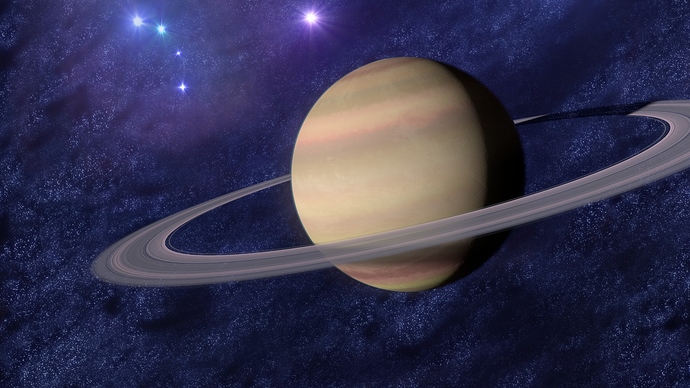 Looks good. If I might make a suggestion, how about positioning the camera closer to the rings, and working in some ice chunks?

It’s looking good so far! If the planet is going to be the focus of the scene, though, it really needs some SSS.

Thanks guys.
Ill see if I can get the sss on it. Not to sure on how to fake it in cycles yet…

I don’t get the sense of “space”. Perhaps it is the textures. There are too many stars in your star field or maybe not enough variance in the stars in the field. Good start.

For planet clouds I use numerous extra spheres each with their own alpha textures to build up depth, they can all be animated seperately then.

I don’t get the sense of “space”. Perhaps it is the textures. There are too many stars in your star field or maybe not enough variance in the stars in the field. Good start.

I’d maybe try to make the darks darker in the bg, say in the compositor crush the colours using a RGB node? It’d also give the planet more pop…

Something else that might help with the depth of the scene is instead of using a texture for the rings use particle systems to create them and using the object selection to put the rocks and ice chunks in…I would create each ring seperatley with a differant set of particle systems. I am sure there are pictures out there that show what each ring consists of…just my 2 cents…a real picture might also help with the star background…as I beleive that place57 is correct…too many stars…also if you are going to have the camera this far away look into the moon’s of Saturn as they would surely be visible at this distance. Also at this distance the rings would appear mostly as you have them but there would also be large pieces of ice and rock and all that. So adding a particle system in would help with the random distribution of those. With just a quick Google search of “saturn’s rings” I was able to find out a lot about them. They are spaced differantly and from this pic they all look jumbled together. I hope my critique wasn’t too painful and helps you improve this render!

it works well, but in order to get enough density of the particles you have to use a lot of them, which slows down Blender and your computer quite a bit, and I’m using a MacBook Pro Retina, 2.6GHz Core i7 with 16GB of RAM! it is much better to use them in conjunction - a texture to represent fine, dust-size particles, and a particle system to represent the large chunks of ice and rock.

At the current distance yes. But as a close up you would almost have to rely solely on the particle system. And if you use say 1000 for emission and set the children to say 100…that would create 100 children per 1 emission so a butt load of particles. also if you use Sub. Surface, displacement, normal and all that extra modifiers on a very simple object like a cube then it will render fairly quickly. Also if you weight paint so the vast majority of the particles are closer to the camera then it takes less to acheive a decent result. Just keep the object that will be used in the particle system very simple and they usually render quickly. Also using a normal map with the displacement modifier allows lots of extra details to be added without having a really detailed object. Also another thing that could be do e is create the rings in 2 halves. One half using a particle system, this being the closer to the camera, and the other using a picture of said particle system render on a alpha background and applied to a simple plane, so you have the illusion that the particles are there when they really are not. Again just my thoughts here.

I decided to start over on the star field. The main field is done in Blender and the brighter bigger stars were added in gimp.

One more update for the night…
More work on the background image. 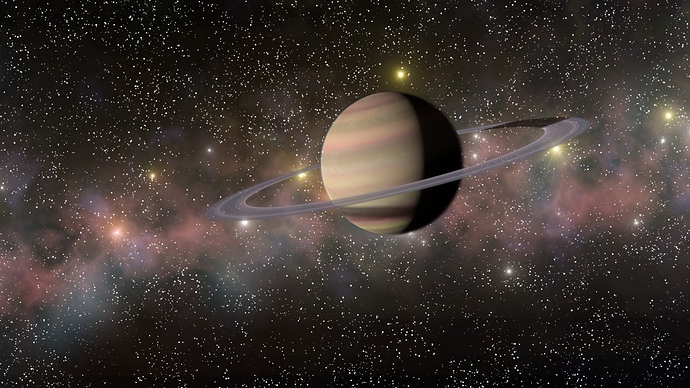 Even more improved and wider…

Still working on it…

Still experimenting with stuff. Tried making a molten type planet, it looks more like a sun though…
Also tried using the cloud generator to make a ring. Dont know if that works either… 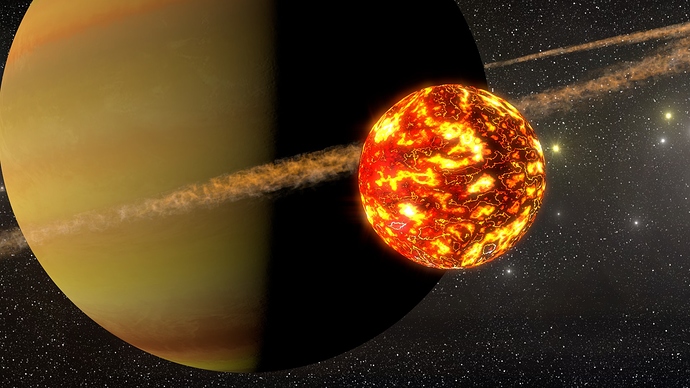 If I were to make a suggestion, I would try separating the layers of the planets.
Make 1 sphere the land and oceans, then add another one for the clouds etc… and another for the atmosphere, if you want to add extreme detail you could separate the terrain and water levels on different spheres.
Though it can be hard to pull off. other than that it looks good. Great job