So i am making an animation project in which a space shuttle (similar to the ISS) is being destroyed. The destruction is caused by something hitting the station at a high speed. Here is a test render of that.
Pl comment and let me know what you think of it. Critiques highly appreciated.

P.S - I know i forgot to add stars in the background. I will surely be doing that. With only a still frame I can say it looks promising. You shouls also add a blur around the edges of the planet to simulate the atmosphere. Any atmosphere drops off with height so there willalways be a little glow. Also, be careful with stars. Technically, you should only see stars if the rest of the image is also dark. Adding a planet to the camera view mean that no stars will be visible.

So should i not add any stars or should i add only a little amount of them? And any easy method to add that atmospheric glow to it? It has to be done in post processing right?

Composition: planet as an object is taking all the real estate on the picture vs the station, which is also proportionately large, which creates a flat image because its blocked in wrong. You have no clear focus on attention since both objects are equally important.
A better effect would be to make the planet even bigger so it becomes a BG element, put a third of it in shadow, and make the station smaller, but backlit and have a long “sparkling” debris field.
Add motion blur.
Add soft glow (glare node).
More contrast.
The proportions of planet and station vs camera lens angle seems weird, it should be wider, creating a fisheye effect. You could add a chromatic aberration effect in that case to simulate a wide fisheye, also some subtle flaring.
Or, if this an extreme tele lense, it should have depth of field. Right now the depth in the pic is very flat.

Check the size proportions of the ISS vs earth and see the curvature + distance here in relation to its size in the frame: 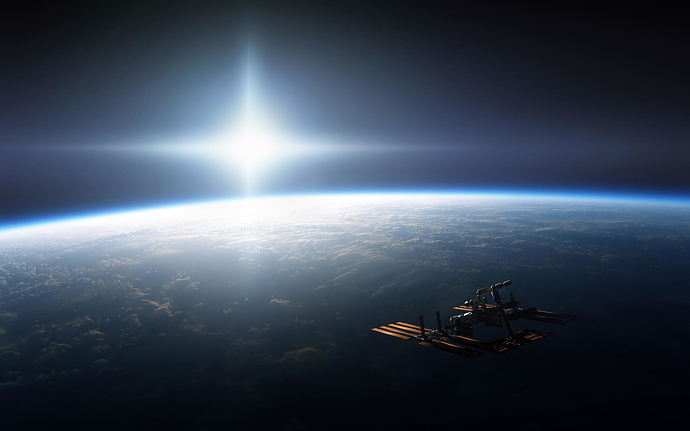 stars isnt what really matters… what matters is that planet earth isnt a bit glossy. at all. if someone looked at this they would know its cg because it isnt convincing enough. so take off the specularity (i assume you mixed it with a diffuse shader) and change it to an emission shader. and also add the atmospheric glow, you cant really get away with that because the earth is really near, and speaking of that it looks pretty small compared to the space station, or that space station is just really big.

Also is the position of the planet ok? I mean at the left side of the image? Or should i move it to the bottom as shown in the reference image posted here by @@AdamTM 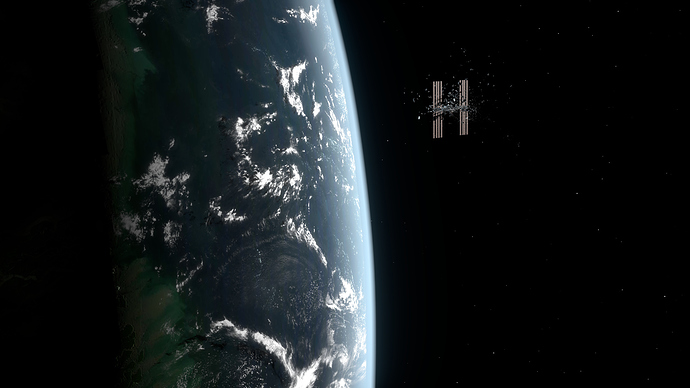 This is quite a cool concept and it’s a good start! The modelling seems spot on.

The only thing I can really point out in your image is the composition. The space station is very small in frame, but its destruction is supposed to be the center of attention. You can show the difference of scale between earth and the ISS accurately without making it quite so small in frame. In fact, a close-up of it as it is breaking up might contribute to a sense of immediacy and emergency in the image’s story. Think of the difference in your emotion between watching the destruction of something from a great distance, or if it’s all around you. Clearly, the fear and excitement of the moment would have much more impact were the destruction happening all around you instead of from the detached distance we see here.

Hopefully that made sense.

Again, the planet and the lighting as well as the modelling look very good. Nice work so far. Keep it up!

Thank you Dan! And you are right. I will look at some reference images to get the scaling right.

So i did some tweaking and ended up with this. How is it? I know compositionaly this is not awesome since the right side is wasted. But do you guys think the scaling is proper? 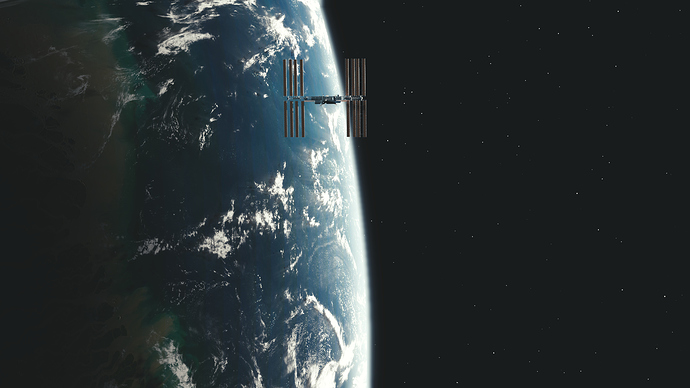 Scale is much better. Though i would probablys cale the planet like +50% larger, and the station 30% smaller. It will give it some great contrast.
Composition still needs work. You shouldnt place the objects like this, it creates too many intersecting lines and a focus on the top middle of the screen.
Dont be afraid to use the space of the frame and give some distance between the planet and the station. Negative space is your friend.

There would not be any fire in space.

in terms of composition I would bring the camera a lot closer o the space station. Show us some detail and action!

Here’s a photo of the ISS. No stars. Also, that image form Steve would be a good shot to replicate for the destruction, or at least the right scale.

1 - This is just one frame of the animation and hence no fire, I’ll add a short burst of fire in the whole animation.
2 - Yes you are right, I will add different parts too.
3 - In the animation, an object is hitting the ISS in the center, hence the explosion starts from center and spreads outwards. Gradually almost the whole station is destroyed.

I agree with you, although I’m taking inspiration from Gravity (Surprise Surprise!) and in one shot that I really loved from that movie, there are stars present. Realistically, it may be a bit overstretched, but it looks cool.
Here is the shot : 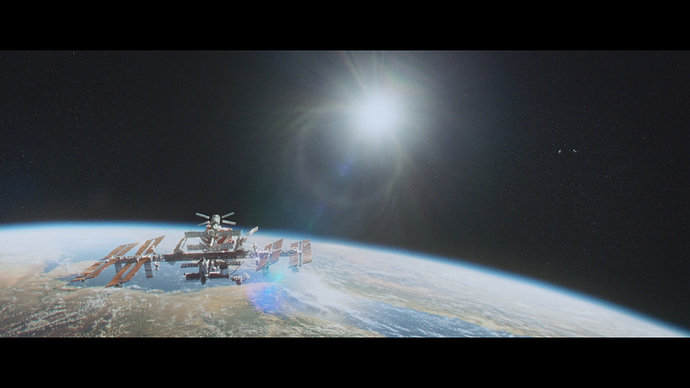 Here’s a photo of the ISS. No stars.
http://www.esa.int/var/esa/storage/images/esa_multimedia/images/2011/06/the_international_space_station_with_atv-2_and_endeavour10/9726248-8-eng-GB/The_International_Space_Station_with_ATV-2_and_Endeavour.jpg 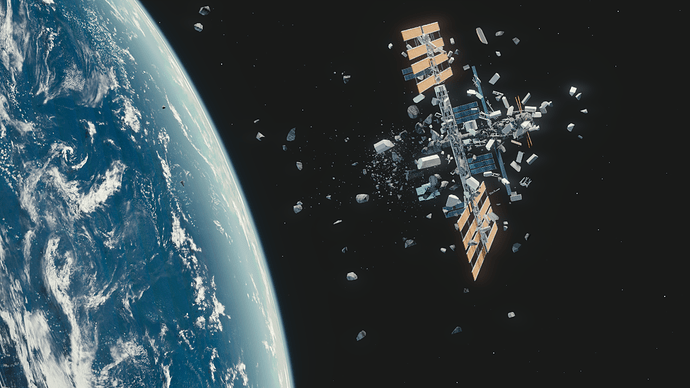