Hi! I started five days ago, and I have been working on models based on simple 3D bodies, like this: But my goal is to create a spaceship like the X-33, and I don’t seem to be able to do it. How can I recreate that shape?

Anyone? Needing some help modeling the X-33…

C4chaos is right. Its basically a rounded pizza slice shape with winglet and flaps. Here is its general configuration:

The shape is based on double lobe propellant tanks inside: 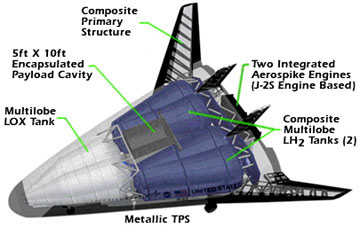 Here is 3 view drawing you can model after: The three-view image posted above is your golden ticket. 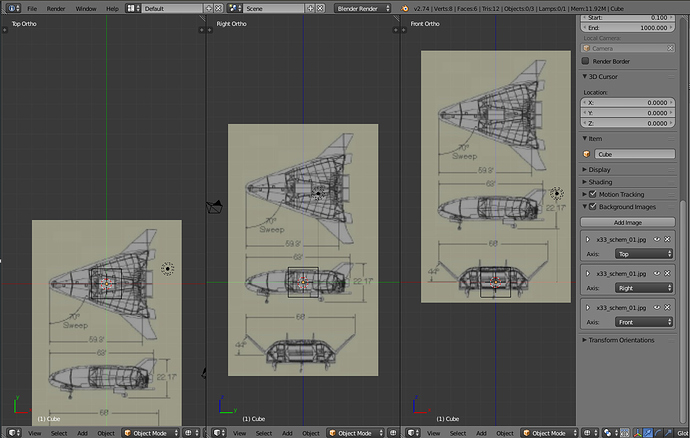 Now make the pizza-slice shape that was mentioned earlier. The trick here is to only concern yourself with the most course geometry right now. I’ve loop-cut through the cube’s X axis, deleted one half of the cube, and applied a mirror modifier so as to easily keep everything symmetrical.

Now the fun part! I’ve applied a subsurface modifier, defined some creases (the purple lines) and added a few loop cuts through the cube. With a combination of edge sliding, translation with proportional editing, and some plain old-fashioned vertex tweaking, we start to sculpt our basic shape into a more complex one. 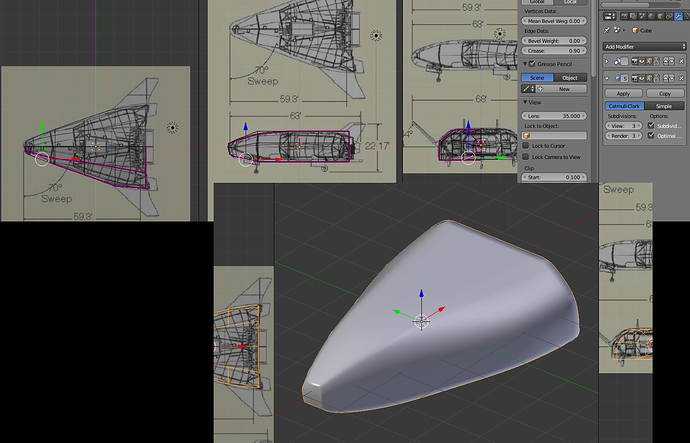 It looks more like a bicycle seat than a spaceship at this point, but the rest of the modelling is not much more than applying these same techniques in an ever-finer scale, until you get the level of detail you desire.

In fact, these five skills will aid you greatly in modelling just about anything. I recently modelled a rabbit for game project (which I need to finish!) using exactly the same methods/techniques; just rabbit-shaped instead of pizza-slice shaped.
I hope this helps point you in the right direction.

Be careful with the engine. The X-33 has a linear aerospike engine, not the usual bell nozzle. The linear aerospike is an extremely cool piece of kit since it does not require any gimbals - since the aerospike contains dozens of small combustion chambers, the thrust vector can be changed by modifying the thrust from each of the chambers.