If you select a vertex on your mesh and hit CTRL-l it will automatically select all the verticies, that are in some way connected to your existing selection.

CTRL+L in object mode links data to scenes. you can google it for more info or look in the wiki on “Link to scene”

oh, and I think you would enjoy the shipyard blend for making space ships:

Guys, I really could use some help with this.

Are you making fun of me?

Okay, I managed to get the guns and stuff placed the way I wanted, then I did the remove doubles, and then I had to find non-manifold edges with ctrl-shift-alt-M, I found a lot of them but with some deleting and editing and remodeling I got rid of most of them, the only ones left are the split down the middle (that’s because the mirror modifier hasn’t been applied yet, I know that’s okay) and one other one, near one of the wing pod things, however the problem is I can’t figure out how to get rid of it.

Here is a screenshot: 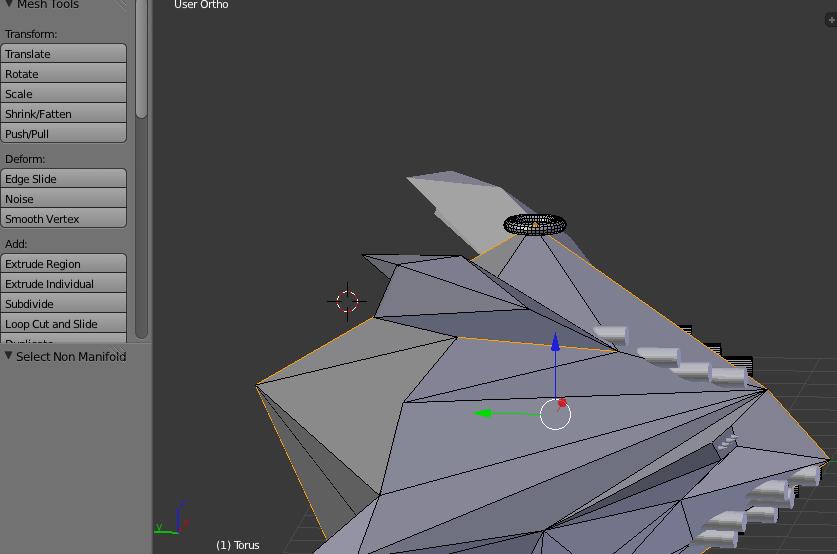 You can see it is highlighted in orange underneath the wing thing. How would I fix this?

You can click on the picture to make it bigger, I need help please

Okay, I have fixed the non-manifold edge part but I need help now, I need to know if I should apply my mirror modifier before unwrapping or start unwrapping first.

Please, I need to know whether I am supposed to start unwrapping or apply the mirror modifier first, I am a beginner

Are you going to use mirror UV’s? There are tutorials about this topic that you can watch on youtube and vimeo, and it depends on what kind of detail you are going for. If you are going to use different details on each side, then apply the mirror before unwrapping.

I don’t know how to do mirror UVs, and my mirror is kind of unbalanced so I guess it would be best to apply it first.