I made a spaceship thingy.
I hope you like it!
BTW This is my first render!

And it’s supposed to be flat shaded! 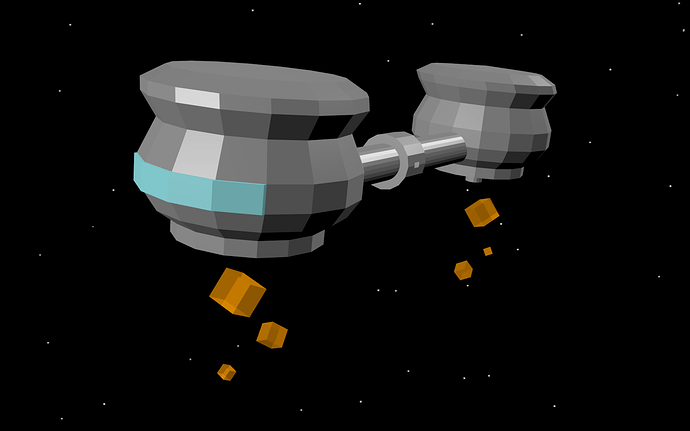 Good for a first render - you might think I’m going to be harsh, but It’s just how I critique stuff!

BTW: welcome to the forum!!!

Good for a first render - you might think I’m going to be harsh, but It’s just how I critique stuff!

BTW: welcome to the forum!!!

Thank you for your reply.
Yes, the “blue stuff” is glass.
I tried transparency on it, but the I noticed the tube in the middle showed through.
I modeled it so nothing is “connected”.
It would’ve been transparent but I screwed it up.
I am going to use your advise for my next render.
And I am going to use Cycles, it looks awesome!

Interesting concept. I could sort of picture it in a Video-Game.

It’s pretty good for your first render, mine was an orange cube lol. Try using some modifiers for your next render as well.

I like the way you’ve used those semi-transparent cubes for emissions from the engines on the bottom (at least that’s what I assume they are). They give a nice, for want of a less over used word, “retro” feel to it.
Though, if they’re supposed to be an artistic representation of flames coming from the engines, I’d like to point out how unless they’re exhausting something akin to solar flares, then they could not exist, since fire as it is on Earth cannot exist in space due to lack of the oxygen needed to burn.

My first render was a Cube…