just wanted to know what the best way is to get this “shining effect” on text:

There you see this orange shine over the words (from the right to the left) and I want to accomplish the exact same thing.

Can you help or give me some tips?

I would like to keep the text without having it to converted to a mesh, because I want to create some kind of preset.

I would rather call it a glowing effect. Any way… I watched the tiny video in loop and I got an idea. It’s for Cycles. (I wouldn’t know how to do that with BI or if that’s even possible.)

The camera is set to look straight at the text so I used the Camera coordinates. The material is a narrow vertical stripe surrounded by nothing (full transparency) across the whole width of the camera field of view. And I animated the X offset to make the stripe move from left to right. Easy as pie!

A frame from the video which is cooking in the background: (1 minute per frame in direct light only… Gah! Let’s hope it will be worth it.) :eyebrowlift: 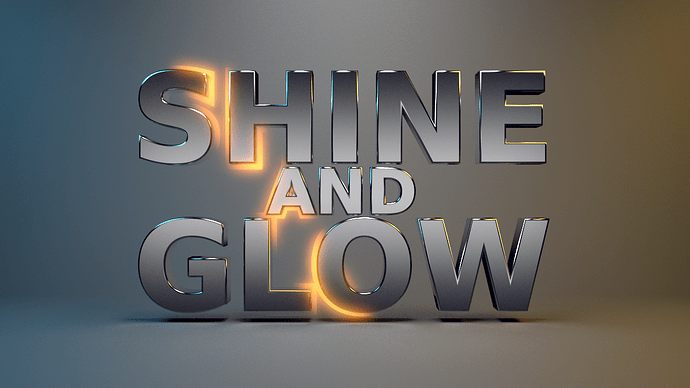 The texts are just texts, not converted, as you wanted. Still, it requires a bit of work. I used a tiny bit of composition, for the glow itself of course but, in particular, to make sure that the light of the glowing contour doesn’t reflect on the shiny material of the text.

The contour is simply a copy of the text on another layer but flat (no bevel or extrusion) with an offset to extend all around the letters. (By the way, the offset is a tricky beast. Glitches appear very quickly depending on the font or the width.) To make it really a contour, there’s another copy of the text with a holdout material (full black) to “punch the holes”.

Now, we render our 2 layers, we add some glow on the contour and we compose it on top of the other layer. Done!

Still, I would change something for the next time… Nothing happens on the main layer while the glowing contour moves on the second layer. I really think I should replace it with a static image instead rendering over and over the same image.

Alright, I’m going to do my round in the forums while Blender keeps on working. I’ll post the result ASAP… Even if it’s ugly.

EDIT: Here we go… on YouTube! Not so bad after all… But it could be better. :eyebrowlift2:

After some (apparently needed) sleep, here is what I forgot earlier in the night:

I really appreciate your help

Big thank you to you!

@Kaluura: That is a nice setup for a common effect. Thanks for the BLEND file.

Can you offer up a reason that you have a Driver on the Seed field of the sampler? Is that a Cycles trick?

Yes, the driver on the Seed is a trick for Cycles. I don’t remember where I picked that up but I do it every time I render an animation to change the seed on every frame automatically. It allows you to have more noise that you would usually allow. It’s especially useful for anything that is static on screen so that it doesn’t look frozen because of fireflies stuck to some place.

You just have to enter #frame as the seed. That’s all. No scripting, no settings.

I did something similar awhile back for some youtube guys. I just had an emitting sphere set with the ray visibility so the camera couldnt see it. Then I used a glare node in the compositor.