Began work on an entry for the latest CGChallenge today and I just finished my first concept sketch (Technically a concept model, but my sketching skills are downright embarrasing).

The idea behind the picture is that there is little in the world that is as spectacular as human achievment. Throughout history we have celebrated men of power, men of war, men of science, men of art, and men of verse. We immortalize these men and women by erecting their visages in stone and in metal for all to see.

The scene shown here is to be the unveiling of a statue of Fyodor Dostoyevsky (one of, if not the most, influential Russian authors) in a Russian city to the cheers of tens of thousands. Thus there are multiple levels of spectaularity in the scene, there is the simple spectacularyocity of the statue itself and of the scene of thousands of on lookers. But even more central to the theme there is the life and achievments of Dostoyevsky being represented.

Looking for some comments on the concept and the composition. 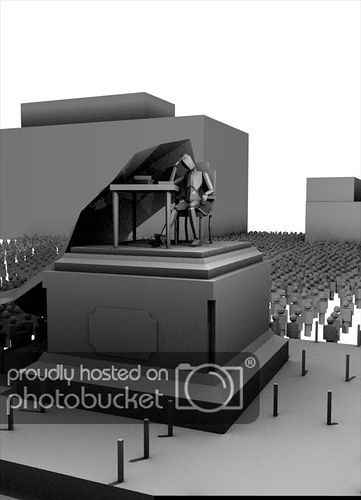 “Detail” of the statue: 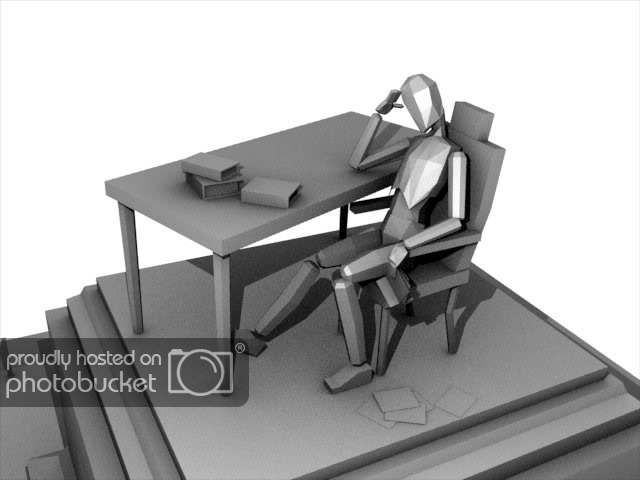 besides you poor sketching skills the pose is quite nice.

based on the rendering you did you could try some hand sketches.
just draw what you modeled. it will help you.

the view point could be changed.
there is not drama between the figure and the people.
maybe put the cam to eyelevel and face the statue.

also there are no probs that realy show what this statue is about!

My first thought about the composition is that it may end up feeling more ‘spectacular’ if the view is from within the crowd as if watching the unveiling of the statue. That way the viewer might feel a stronger connection to the emotion of the crowd by being able to see their individual expressions and have a better sense of the mass popularity of the figure in the statue.

Just my 2 cents…looking forward to seeing what you end up with.

KingFisher (HumanForum over at CGtalk)

I agree on the crowd view. Thinking about it though I don’t think that you want to take away from the massiveness of the crowd. Perhaps an elevated view from a balcony or something so that you are in the crowd and yet you can still see endless people.

since you wanted views on the concept, I’m not diggin the idea. Sure its a great idea and example of a spectacular event, but i don’t think its going to win. (though the idea definitly is better than most on cgtalk right now)

If i were in this event, i would focus primarily on the idea, “the story” that the scene is telling the viewer more than the “eye-candy” Right now I see too many insanely detailed awesome models,with crappy concepts rather than vica verca.

I’m not exaclty sure how to focus more on the story. The event is the unveiling of the statue, the story is the entire life of Dostoyevsky represented by the statue, if I focus more on the statue and less on the entire event then I lose the spectacular event, if I focus too much on the event then the story is left out. I need to find a good comprimise. I like the idea of trying to create a dynamic between the statue and the people, part of that will be done by actually having models for the people, looking, pointing, etc. but a change of camera angle could help as well. I like the idea of moving the camera into the people, but when I do that I lose too much of the view of the statue. I’m working on some other ideas for a better camera angle right now, I’ll try to post some ideas later tonight (this morning, whatever).

Another camera angle for this one. I moved it closer to the crowd so that they now surrond the statue and the people in the foreground will hopefully give the feeling of connection that I am looking for. I also moved the background a bit trying to draw the attention more towards the focus.

much better composition. with the lower angle, you feel like you’re in the crowd, and puttin the statue up high puts more emphasis on its… spectacularness.

i have to agree as well, much more dramatic expression.

you have a lot of empty spcae (sky) and i think you shoudl work with this as well.

i think you could still lower the cam more than you did.

the lack of detail isnt bad in this case. as long as you story is good and supports this puristic approach it will be fine.

The empty space could be filled with an airplane.

I’m glad this new shot is more popular, I went and submitted it as a concept sketch on CGTalk as well.

In regards to lowering the camera a little more into the crowd I found that if I put it any lower than I have it now I lost site of too much of the statue so I tried to stick with a happy medium where the crowd is still close to the camera but I can still see the statue. I do need to do something with the top of the screen, I think once I have a sky up there the problem will be lessened if not solved, not sure what else I could put there, an airplane is a bit out of the question though. I hadn’t mentioned it before but the shot is taking place in the late 1880s, shortly after Dostoyevsky’s death, not many airplanes out and about at the time.

Hey I like that new composition a lot better. I don’t mind that the view is slightly above the crowd, I think the affect is working fine.

My concern now is the statue…how do you plan to indicate to the viewer who the statue is? Does it really matter? I could imagine seeing this image in completion…and feeling that the scene is spectacular even if I don’t know who it is. But if it’s important to you as an artist that I the viewer understand who it is then I think there will need to be more visual cues. I’m not critting the sketch at this point just mentioning it as an idea to consider.

I’m also wondering about the “tarp” for lack of a better word. I understand that in the sketch you are illustrating the concept that that statue has just being unveiled, but I’m wondering how this will be communicated in the final image. Will there be people pulling the tarp off, or maybe it’s just a motion blur treatment…not sure what you intend but I think that will be important also.

One last thought…the crowd. Is this a well organized event? If so there might be chairs, a podium for a speaker that might be dedicating the statue etc…my point here is that there would be organization to the placement of the people in the crowd…defined walk ways etc. On the other hand if this isn’t that type of event (1880’s?) maybe it’s more like a mob of people trying to get as close as they can.

Best of luck, and looking forward to seeing what’s next.

The cloth / tarp deal will be being pulled down by a few official looking people off to the side, and while I hadn’t thought of it before it would be a good idea to have someone in front of the statue giving a speech / presenting (much like Dostoyevsky himself did at the unveiling of the statue of Alecsandr Pushkin in Moscow). You also bring up a good point about recognizing the statue, it will be labled with a plaque, but as it takes place in Russia it will be in Cyrillic. While I think an understanding of Dostoyevsky’s life and work would enhance the picture I want to focus more on the event since there really isn’t a way to capture all of that for those who have no prior knowledge. I do want to at least make it clear that the statue is of an author because I think that that is an important element of the scene.

My first modeling submission for the challenge is now in. Most of the work went into those lamp posts which I found fun to model. Next I will either begin work on the statue or start on the background buildings, depending on my mood.

Another modeling update, began work on the background buildings. This is some good experience for me because I am learning to conserve polygons on distant background objects (the entire building so far is only 13k).

looks like a great start to me, 13k is fantastic! i’d love to see a wire,

And your wish is granted! The model is mostly just this section repeated several times.

Not much to crit there…

This is looking pretty sweet.

P.S.
I think you have inspired me to have a go at the challenge also. We’ll see if I can come up with a concept

The idea stage really is one of the hardest parts. I spent the better part of an entire weekend coming up with and throwing out ideas before I liked one of them.