Spin Duplicating Curves (Or An Alternative)?

Welcome, ladies and gentlemen, to Chapter 2 of what I’m retroactively calling The Starship Chronicles (Chapter 1 was my previous thread on creating a space frame). Now I have a new problem.

So I’m still working on modeling the Odysseus, and I’ve now started adding the gravity centrifuges.

I’ve attached the centrifuges to the cylinder along the ship’s axis of symmetry by creating an appropriately sized cylinder and then spin duplicating it. Easy enough so far.

However, for some added texture, I thought I’d try adding an octet truss that surrounds each connecting cylinder, which looks nicer and also makes some degree of structural sense (the connecting cylinders would be pressurized tubes that people move through to access their quarters in the centrifuge, while the trusses would be the actual load-bearing structures). 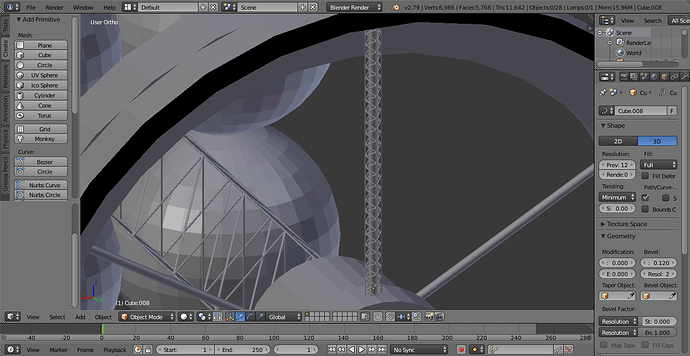 It’s easy enough to make an array (and thus the truss itself) when it extends along, say, the Z or Y axis. However, since the tubes are oriented radially around the ship’s central axis, two inevitably don’t line up with an axis, so I can’t get the octet trusses to extend in the direction I want.

You cannot possibly grasp how frustrated I was when that didn’t work. Apparently Blender knew I tried to trick it. 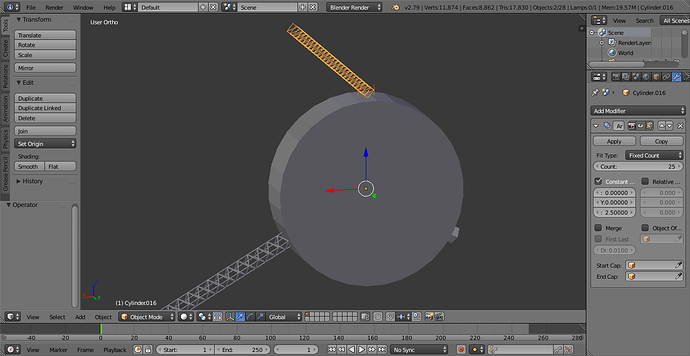 Have you guys ever done anything like this and successfully solved the problem? If so, how?

The attachment doesn’t work and there’s too much text. If you haven’t already read my tutorial on how to ask questions, here’s a short version:

Use images to help you explain and upload an example .blend so others have something to work with when they troubleshoot your problem and try to answer.

With that, you don’t need to write a novel to explain: “I’m trying to model the flux capacitor like this one <image> but hit a snag when trying to make it with x, y and z <image, including x,y,z>”.

Include the whole interface in the images. The .blend will include the structure, modifiers, object transforms, helper objects that are all important when troubleshooting a modeling problem. And if the thing needs to be modeled a different way, the bits you’ve already done might help so one doesn’t have to start from 0. Don’t need the whole .blend, just the parts that are needed for troubleshooting and/or to answer as clearly as you asked the questions.

Attachment fixed and screenshots have been added. I’ve also trimmed the text as much as I could, but I felt like a lot of it was necessary for context.

See attached file, basically just add a second array and set the offset to an empty that controls the angle. It’s a bit finicky with rotation and scale though.

See attached file, basically just add a second array and set the offset to an empty that controls the angle. It’s a bit finicky with rotation and scale though.

That did the trick! Finicky is an understatement, and I had to consult a few Youtube tutorials before I finally nailed it by moving the pivot point, but it definitely worked! 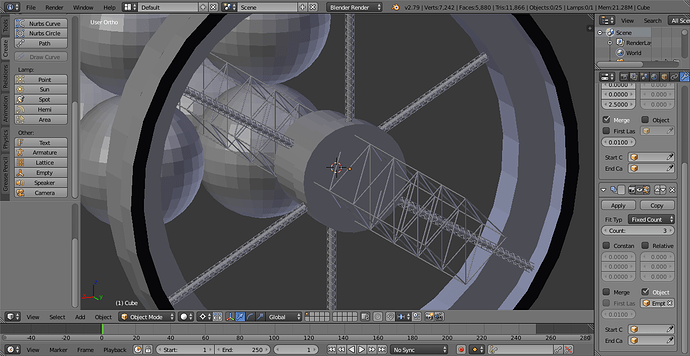