I’m working on a game where wizards are able to fight each other.
In that game, I want to make a spell called spiritual bond.
It has to look a little like this image: 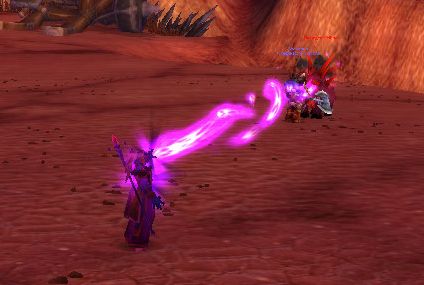 I want to make a plane with a texture, and have the ends of that plane reach the 2 players.
This also means that if the players walk, the plane must become longer/shorter and turn.

But I don’t know how to do that.

I assume that the most easy way to do it (if this is possible) is adding 2 bones of an armature on the ends of the plane, and make the bones move to the location of the players.
Is this possible?

While wrinting this post I also thought of an idea to make the centre of the plane move to the middle of the 2 players, and make the plane longer/shorter by calculating the distance between to players… And also adding rotating that way.

I’m not a great hero in python though so if anyone has an easier solution, please let me know.

Well, I don’t have a solution for your problem ( I’m too much tired), but the image looks impressive!
Keep blending!
Bye

So you basically want the stream to track to the other player no matter which way you run or turn? I’m sure it’s not that difficult. I would have to build something similar to test and play with, but I’m thinking maybe you could make 2 planes, (or cubes for a more 3D effect), and set the object center to the end of the second one. The end towards your player. And have it track to the other player. While the first one would stay aimed straight ahead, but scale according to the distance from the other player which I know can be done with python, and an F-Curve with a frame property set. I’ll see what I can come up with, but I’m sure you’ll have a solution before I’m finished.