No one saw it happen. Tom’s body began to tingle and pinch as he sat in his office chair. He thought he should try and cry out for help but the words did not form in time. An electrical sound shot through the office and Tom’s smoldering cloths tumbled to the floor in a heap.
“I couldn’t explain how, but I knew I was needed. I felt my mind being twisted and stretched as it was dragged into another world. For what… I don’t know!” Tom thought.

“Teleportation completed sir. DNA scan confirms the field data.” the technician reported.
“I want a full medical scan and evaluation. Send a slave in as soon as it regains consciousness.” said the captain. “I want it comfortable until we are given the order to kill it”
“Kill it,” responded the technician as his flesh flashed in rolling oranges and yellows showing concern. “We are going to disregard the prophecy?”
“We are winning this war!” the captain bristled. “I don’t think the high council is going to let this thing jeopardize that by letting it live. If it fell into the wrong hands…” he paused and flattened the spikes that had sprung up over the entirety of his flesh. His color paled showing a more relaxed posture. “Well we all know what that could mean.”

The scene:
A large space ship filled with water. In a small air bubble our hero floats weightless and unconscious after teleportation. Several cuttlefish looking aliens hover around the bubble. One alien presses buttons on a glowing instrument panel. A humanoid looking female swims outside the bubble peering in. Across a large expanse of the ship 1 or 2 large windows show a view of space. The interior is very biotech and organic looking with very few squared surfaces. A few aliens float in the background to give a sense of the large size of the water filled craft. 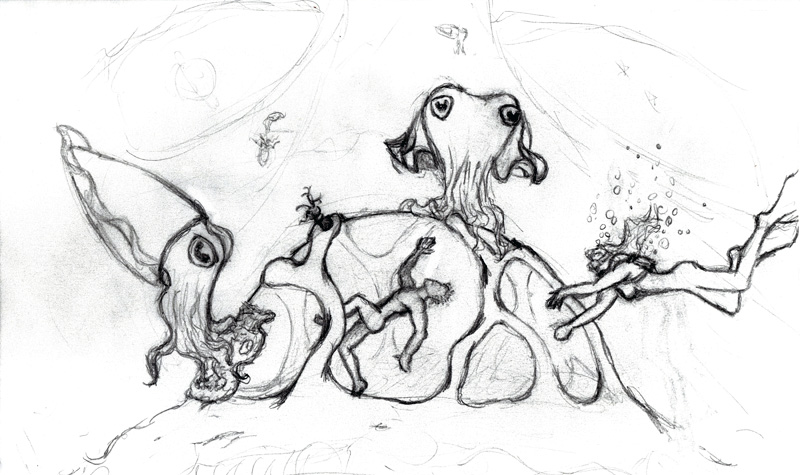 Alien body test. Still working on the tentacles. The heads a bit too fat for the rest of the body, and I don’t like the cleavage in the front of the head. I’ll keep poking at it. Alien body update. Still more to be done for sure. I’m happy with the main body but the head and tentacles still need work. 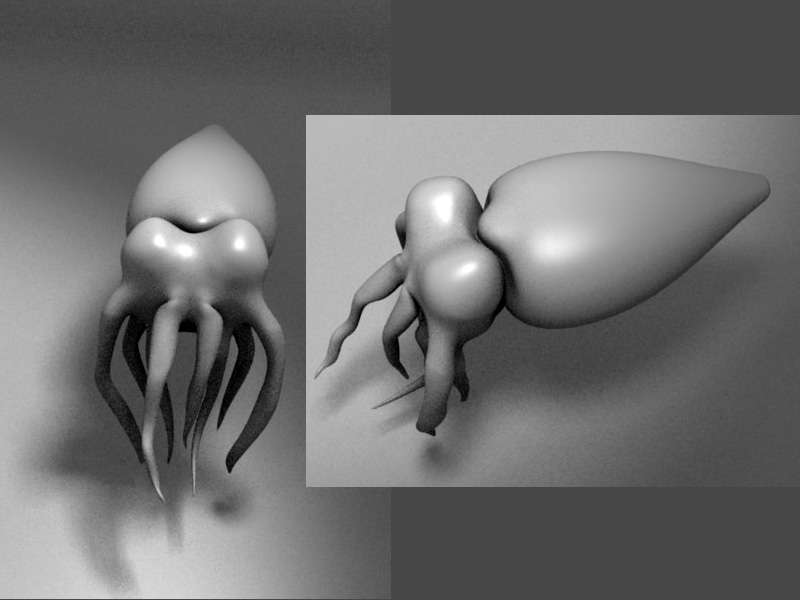 This is awesome, look forward to see how it turns out.

Update: I finally got the aliens looking acceptable and added the humanoid models. Here is a test render I did just to see how thing are looking. I am going out of town this weekend and only have my (underpowered) laptop so I am hoping to work on a tentacle droid idea (inset) while I am away and incorporate it into the scene when I get back. The female will have a skin suit and re breather pack also that I can probably work on too if I get time. Have a good holiday weekend (US folks) and everyone else have a great regular weekend. 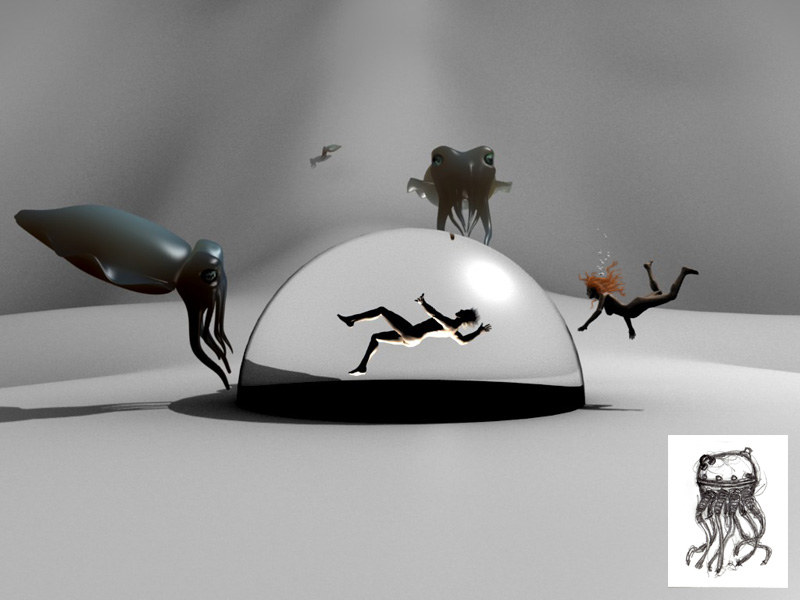 Interesting scene, can’t wait to see it with caustics.

Wouldnt want to be that guy…

If you dont know what the rule of thirds is…http://en.wikipedia.org/wiki/Rule_of_thirds

@fieldgunner: He will, of course, escape and save the universe. The lovely slave girl is destined to aid him.

Thanks for the advice. Composition will come soon, I just want to get all my models built first.

Worked on the tentacle bot a bit and the slave girl model.

Update. I also scribbled some notes on a second image to give an idea the direction I am heading. 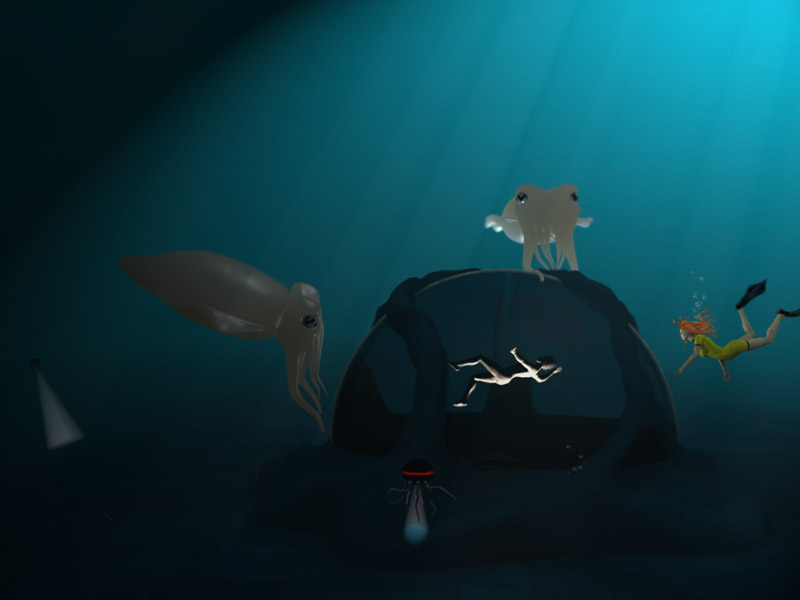 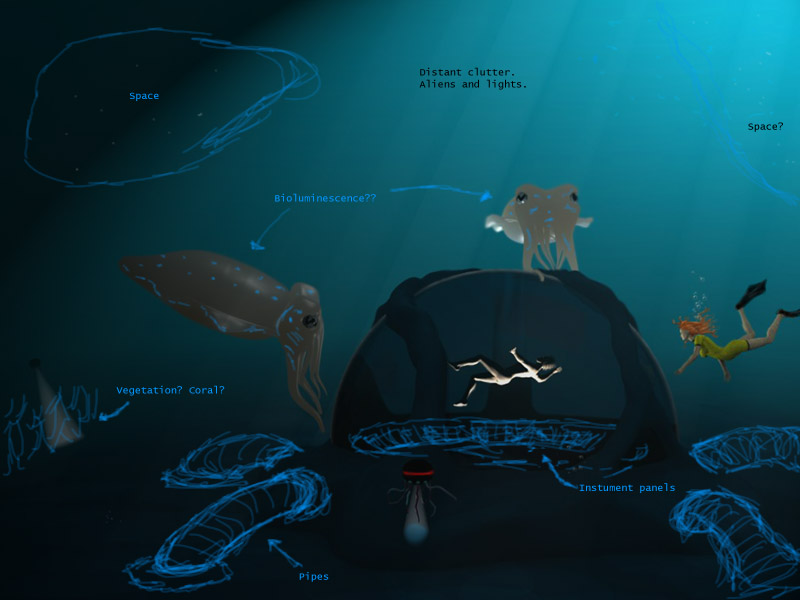 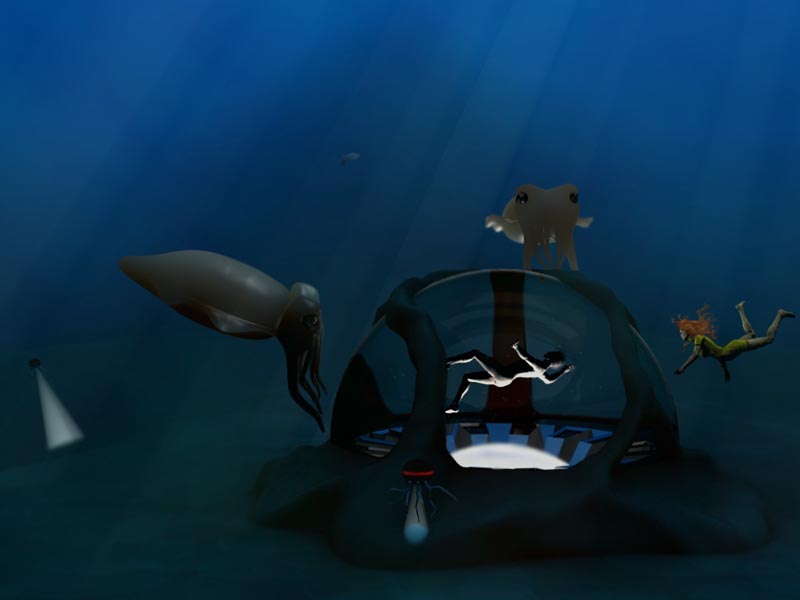 Is the final going to be a different angle. Angle shots can give a more dynamic feel to it.