So, I haven’t been very active in the cg community recently, mostly due to my new job as a graphic designer. But I’ve recently started using Blender more often again, so I figured I’d start this thread in an effort to keep me motivated.

Currently I’ve been working with the amazing sapling add-on and seeing what types of trees I can come up with/recreate from the real world. I’ve also been using World Machine alongside Blender to produce more realistic landscapes. 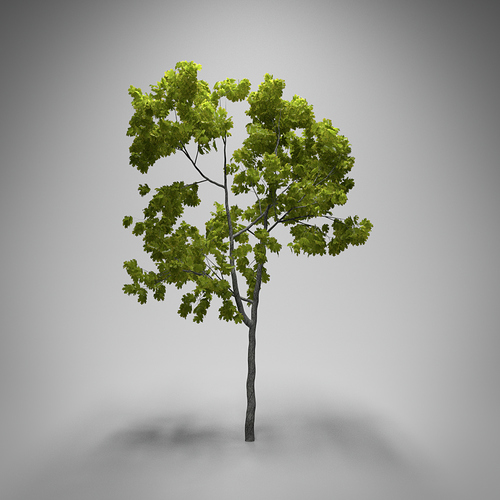 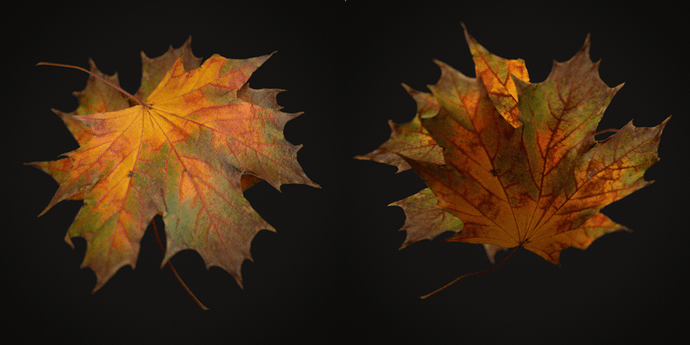 Looks like you’re having fun with the sapling add on. Keep it up!

great work! the material is spot on, waiting for the details

So it’s been a while since I’ve started this, but I’m still planning on updating it occasionally. After learning just how capable the Cycles render engine is when it comes to rendering instanced geometry, I’m considering rendering a large-scale forest in front of a lake as my next project.

Here’s a render from a smaller test I ran today (250 trees - the original trees are 250,000 faces). At 300 samples and at this resolution, it took about 5 minutes to render on my GTX 780Ti. I’ve been amazed how much geometry I’ve been able to add without having to resort to billboard particles :eek: Here’s a much larger-scale image with 55,000 trees (render times between this image and the previous image differ only by about 35-40 seconds): Thanks! Heh; that was a really cool project

So this render is a little bigger (and cropped a little differently), but I’ve managed to fill it with ~85 billion faces in instanced geometry. It took about 15 minutes to render. 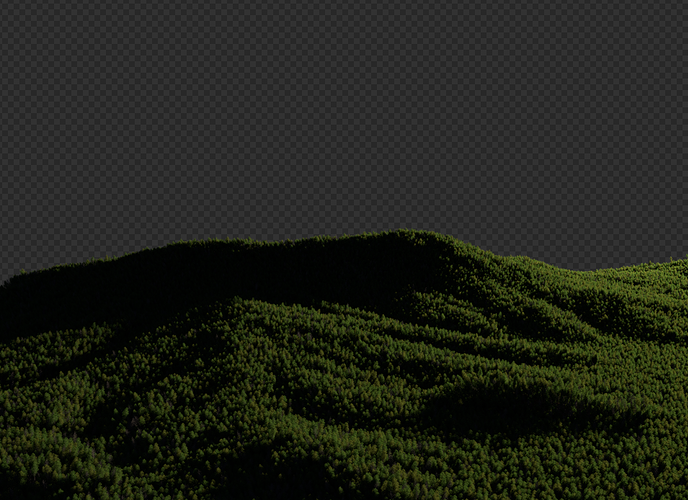 I’m currently working on creating a few deciduous trees (as this is all composed of variants of the ponderosa pine I threw together earlier) and giving them some fall colors to see how it looks.

I’ve been working on a few other trees to pair with the ponderosa pine; I’m hoping to create a useful little library of them for future renders.

Here’s a Red Alder with spring, summer, and autumn variants: 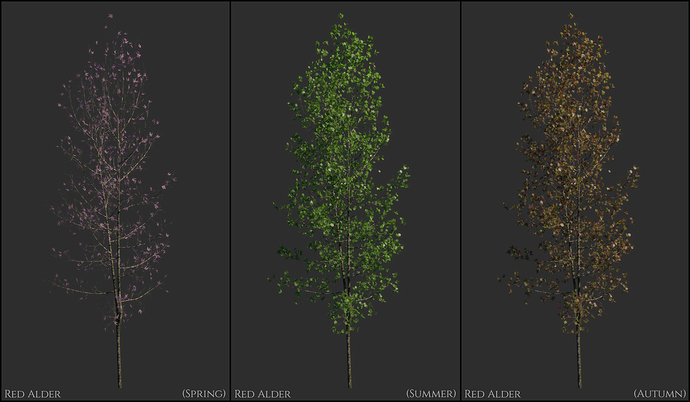 Here’s a green ash and its seasonal variants; I’ll probably do a conifer soon. 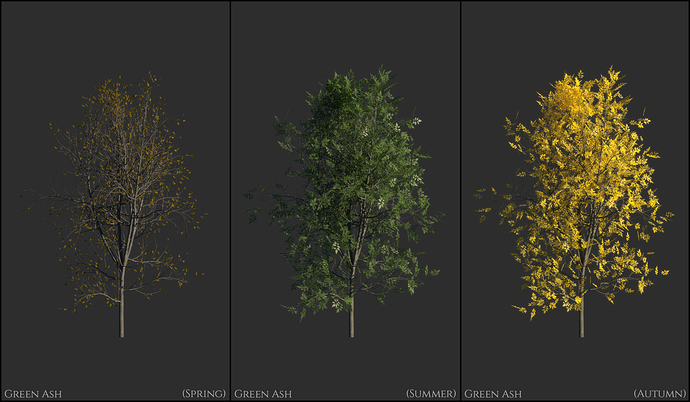 I decided to take a break from trees for a while and move on to different subjects. I recently found a folder of all of my really old, really terrible renders from ~6 years ago, and I thought it might be fun to try to recreate some of them

Here’s a telescope render from when I first started using Blender, and one I put together this afternoon. This was a bit of a shader challenge as well, as I have never been very good at creating metal shaders…

Nice work here! Keep it up!

Here’s another tree render (I can’t seem to get away from them). I finally figured out a way to distribute vertex groups across multiple leaves so I could set up a cloth simulation, allowing the leaves to droop as they would in real life (rather than stick out like they do in the ash renders I uploaded a few posts ago in this thread). I also tweaked my current leaf shader setup to something that I think looks a bit more accurate.

Anyway, this is a sugar maple: And here are some closeups of the leaf shader in action:

Could you share your method on implementing a cloth simulation to the leaves? i am very interested in that :D.

Did you just pin the leaves in appropriate locations via vertex groups? or is it something more complicated?

I’m hoping to release a tutorial on that (along with multiple other realism-enhancing techniques I discovered along the way) sometime tomorrow.

In the mean time, that’s basically what I did. I separated the leaves into their own individual objects, set up a vertex group on one leaf, copied the group to the other leaves, and used the data for pinning. It’s a bit more complicated than that, as I also used additional subdivisions later on, and added some displacement as well, but that’s the general idea :yes:

So I messed around a bit more with segment splitting and came up with this, which I think is a bit better than the previous sugar maple render. Thoughts? 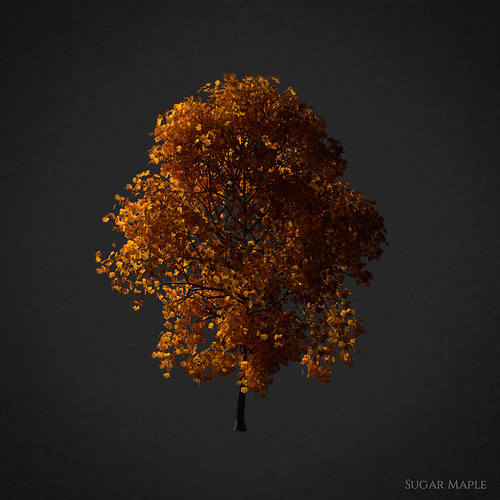 I am also doing a tree study, i hope i can start to show some good results soon.
I’m looking for a good leaf material could you share yours?
I think that using blender to generate the tree model wont give you photorealistic results, I mean you can surely achieve it but it will take alot of work that is unecessary complicated.
I think LOD ( level of detail) is the most important factor when chosing how to model your tree.

what I’m testing at the moment:
using more than one leaf model with individual texture
using the random value in the leaf shader to add even more color variation
using a black and white image to block/ let through translucency in some part of the leaves.
using sss , i saw people using sss for a rose material in rendered with arnold.

-about the trunk:
in most of the tree models i saw it seems that people focus on the leaves and totally forget about the trunk, but the trunk is very important and needs much attention.
just putting a tileable texture isnt enough.
Many trees have scars , smalll mushrooms that give some color variations to the texture ,moss, ivy.
So what im tryng to do is to build a tree material out of different layers.

I use speedtree to make my tree models btw.

I am not at home for another week and can’t test stuff at the moment.

Walten, thanks for all the critiques!

I’ve used three different leaf textures with this model, and all of the leaves are different shapes as I applied displacement to each of them as a whole, which gives each individual leaf its own unique traits.

I was actually already using a translucency map and SSS for the leaf shader. I’ve attached a screenshot of my current node setup for said shader.

I tried to add a bit more detail to the trunk, but I’ll admit that this next render is still a bit lacking. Due to the massive number of leaves, as well as the SSS and increased light bounces I’m using, these take a while to render…

There are certainly many programs that produce trees that look much better than Blender’s, but all of the ones I’ve found aren’t currently in my price range (at this point, I think I’m most likely to buy GrowFX; then I could open them in 3DSMax and hopefully export them to Blender from there). Because of the cost of these programs, I’ll be sticking with Blender for a while longer :yes:

Anyway, here’s another render. I went for a bit of a different shape for this tree to see if I could potentially make it a bit more interesting. My plans for the next render include: 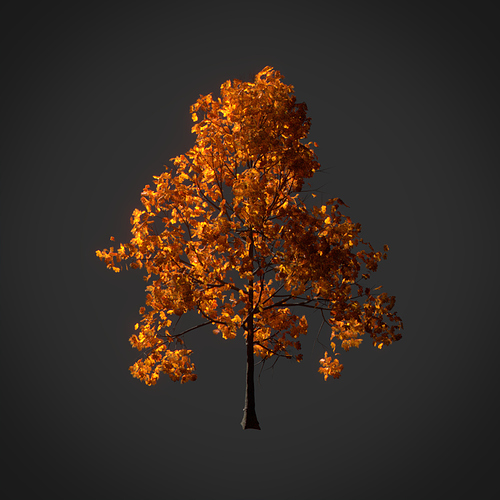 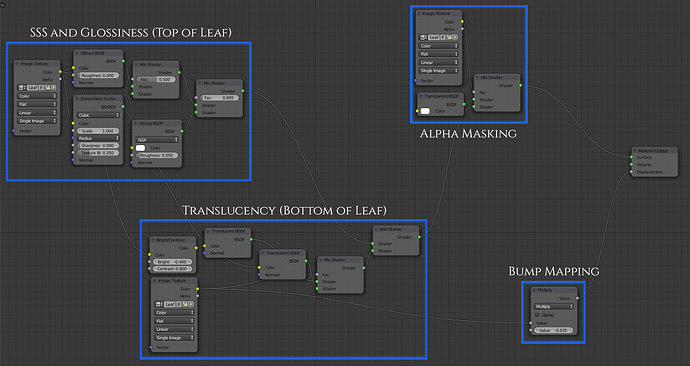 try arbaro its free and you can export as an obj i think also try to play aroud with the size/ amount ratio of leaves.

I made textures with alpha and normal maps for wounds in the tree bark but i cant share them right now since I’m not at home for another 4 days.

Also try to think about how you will use your tree in your scene , how detailed you need to be, it really changes everything.

Thanks for recommending Arbaro! Actually, I was using Arbaro before I used the sapling addon; apart from having a bit more control over the tree trunk and the placement of the leaves, they’re essentially the same thing.

I did see that Xfrog 3.5 is on sale until the end of February for $130 (for the Lite version); I may purchase that sometime next week.

I tried tweaking some of the settings from the last tree I posted, and this was the result: 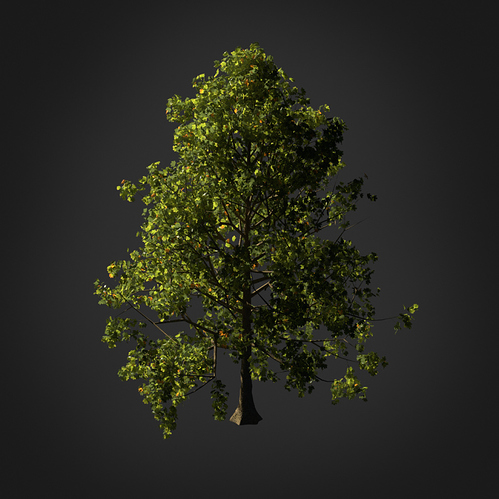 It’s still not quite where I want it, but it’s getting there.

Here’s another update. I found that working with compound leaf textures produces better results than simple leaf textures (even if the leaves on that particular tree aren’t compound in real life): 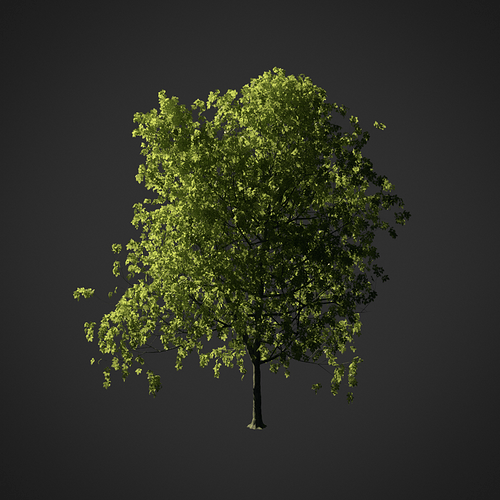