I’m working in a project in which a need to use subsurface scattering (SSS). In my scene a have a hollow object with a light inside, an the idea was to allow the light scatter inside the walls of the object and light the surrounding surface on which the object rests. However, it looks like the light only makes the object glow and then stops without bleeding onto the surface, creating a very unnatural shadow around the glowing object.

As I would prefer to not share the project now that it is nearly finished, this is a little sketch I’ve prepared (please, don’t get astonished by my drawing skills!): 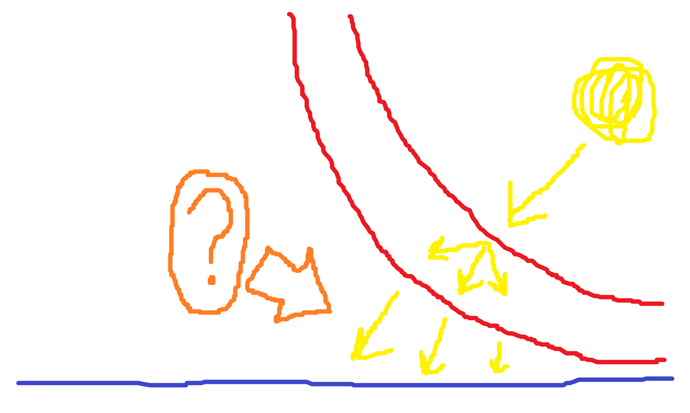 I’ve seen how the effect does appear if a make the object and the surface a single object, but only if the surface has not any material. The behaviour seems a bit weird. Isn’t there any workaround to this?

i am not sure, what object you talking about,can you tell us more?anyway ,if you make a material with only SSS,then try to mix a littlebit transparency to the material,that helps the lightrays going trough the object,translucency can help too,depents of your needs.

another method is,to avoid sss completly and uses only a volume scattering shader with transparency shader.

Why not just fudge it and make the surface emissive? Adding a light path node so it’s only emissive to diffuse rays should avoid the SSS and cheater-emission from appear together when viewed directly or in glass/reflection.

what ever works for you.to be honest,i dont know what material/object the OP want to archive.fakeing, like with emission should be the last method, because it breaks the pbr rules ,because its fake.but if it works, who cares.i would try without faking and see ,how i can optimize my material,so it behaves like i want or should.

I would still use the SSS and just turn up the transmission to the desired amount.

I did a test on this thread quite a few years ago.

The output from the emissive surface is almost identical, yet the render time is about 1/4 of that using a light behind a translucent surface.

I just knocked this up - is this the type of effect you are after? [http://www.jupiterrising.co.uk/Blender/Softbox1.jpg] [http://www.jupiterrising.co.uk/Blender/Softbox2.jpg] The first image uses a point lightsource inside the box - with a diffuser made from a squashed cube with a white translucent shader applied. The second image - the shader on the diffuser was changed to be a white emission shader. There is very little to tell them apart. There is a slight falloff towards the edges of t…

thanks for your test,and makes sence.but is this the material that he want?i am not sure.

In my scene a have a hollow object with a light inside, an the idea was to allow the light scatter inside the walls of the object and light the surrounding surface on which the object rests.

for a flatt locking emissive object ok.but a hollow object with light inside,and scatter inside the walls,sounds more like a glass object/mat.

he should be more clear about what material he wants exactly.

Well, finally I decided to combine the SSS workflow with a translucency shader, as @Solvent and @pixelgrip suggested, and it worked out pretty well actually. I think it was the best option given the constraints I’m working with, or maybe the most “logical”. Anyway, I’ll post the result in a few days and I’ll make sure you guys are notified

A few ideas, try changing the SSS to random walk which is more accurate and not an approximation. Also try the principled volumetric shader, as it can be set to have light emission, which im sure works quite well on the surrounding scene as i recently tried it.

OP - you could try full volumetric SSS. I created such a shader a while back and posted it up on Blendswap.

the use of volumetrics, can be good ,if you know what you do.for example if you know the scattering coefficient and or the absorption coefficient of your material,then you can get really physically correct results.

if you know how to calculate the density for your given mat then the result should be at photo realism.

the use of SSS instead makes it easyer.you can give the material the scattering radius,that you cant yet with the volumetric material.this make it easyer for skin shading ect if you know how deep the scatter of your material is.and you can control it with the scale amount too.

like sayed.if you want a sss for skin with a volume scatter ,instead of the sss shader,you have to calculate the correct density and have to use the correct scattering coefficent.

both methods works fine,if you know how it works.both have pro and cons.

for example the sss shader with the radius is easyer for skin like shadings because you can set the radius how deep the scatter is.
the volumetric shader are better for volumes,if you want to have visible volumetrics scatter effects ect.

for me it is sss look from outside, like skin radius depth.look inside ,then volumetrics.