St. Mary's Church in Krakow, Poland circa about 1320

Illustration done for cover of paper model. What do You think about it? 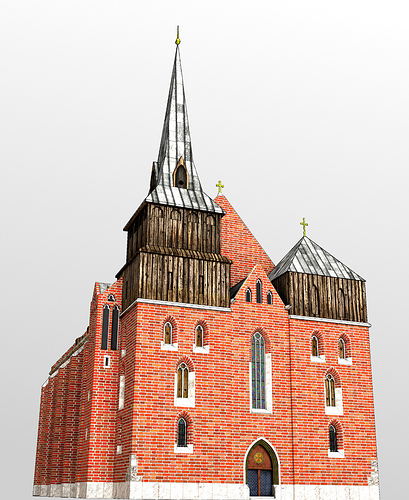 I made an interactive model of church.

Mariacki test 2 by M.K. on Sketchfab

I’m asking for some criticism, anybody help?

The model is very nice!

The texturing seems a little flat and unlively to me. But that is - i guess - more a concern of the “neutral” lighting, than of the textures itself. And as it is a model without a background or world around it, I don’t know for sure if that is what you are up to. The model itself is fine, but a context would enhance the realism and give you the possibility to set up a credible lighting. But as I said, I don’t know, what you intended, as you maybe just need the model for itself.

Edit: I skipped that it is for a paper-model-cover. So forget that^^ It’s fine!

The model and textures are nice but ther scale of the brick texture is incorrect. The brics are too big and they make the church look very small…

Thank You very much for Yours opinion. They are very important to me.

General conception for this image was to recreate paper model with extra architectural details (3D windows niches, entrances) so i decided to give a more flat look for texture for more paper look. The paper model do not have any background so I omitted it in 3D model.

Scale of the brick texture was intentionally up scaled. Paper model is in 1:200 scale, one brick on printed parts have 3,5mm in lenght which give 700mm when we considerate scale. In gothic period bricks have usually 280-300mm in lenght so in texture bricks are about 2,5 times too big. This change come out from fact that on the print in 1:200 scale brick pattern was to noisy and unclear.