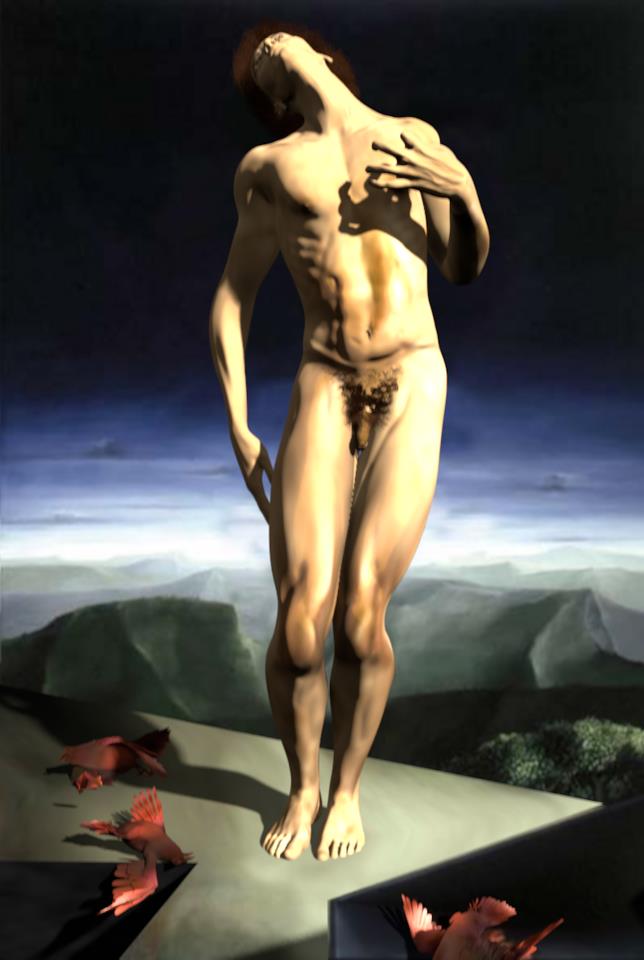 Very excellent model. Very Greco-roman. Did you model it yourself and paint over it – is it a full painting?

modeling for myself and textures painted in gimp

The knee area in both legs is not well done. The rest is very well done.

It really looks more like a painting than a render. Great work!

As for the nudity, in my opinion such a picture doesn’t need a warning. Every second human being has got a penis and every human being knows than a man has a penis and how it looks like (even children). This picture shows nothing abnormal or unnerving, which might stress anyone’s psyche. At least, that’s what I think about it…

thanks rozmiarek, I’m a fan of your work

Cool image, but the anatomy is weird… reminds me of El Greco’s distorted human figures.

I like everything… except the figure, specifically the pose. I feel it is slightly forced. I’d suggest more study of the human figure, especially anatomy and movement.

Don’t get me wrong, I’m not trying to demerit your work. It’s fine work!

Very fine - I’m also reminded of Dali and El Greco - in a good way. I expected arrows with St. Sebastian though.

The anatomical detail that strikes me as a bit odd is the line around the pelvis - where the iliac crest (the pelvic ‘wings’) make a line, it normally sweeps down to the groin, rather than across the bottom of the abs. At least in leaner figures like this. Great look though - how did you get the painterly look in your render? I’m very impressed.

Thanks guys, all your comments and suggestions are important to me, greetings from Ecuador

has a bit of a Dali feel to it

Looks definitely Dali-esque. Did you posed the character or is he modeled this way? I would like to see the wireframes.

Great Work! Could you please share the .blend file, if you don’t mind? THNX

very cool, the lighting and composition are definitely dali-esque, although overall the piece is not particularly surreal.

First: I love the artistic intention here, but I would like to now suggest a few possible improvements to its material execution in this medium.

Second: The … ahem … groin rather gets in the way. In other words, it stands out too much. Too much, say, contrast or saturation or what-have-you. It “draws my eye” away from other more-important elements of the shot, such as the man’s face. (Given that everyone actually knows what a winky looks like

…) unless you are consciously making an artistic decision to imitate past practices, at least reduce the contrast here. (The pubic hairs, pardone, madame… are going “straight to black.” And, in this context, “black is bad.” See below…) If we were to unwittingly “draw the eye” to this area, then “our eye” of course would be “drawn” [by testosterone, if nothing less…] to “this area,” and in so doing it would swat the entire shot dead just like a poorly-positioned housefly. We obviously don’t want that.
Third: You are definitely “pushing the physical limits of the (video) media” in the area, say, of the man’s neck. The (my…) left side of the neck might be (Ansel Adams’…) “Zone 3” while the (my…) right side is “Zone 6” and both of these areas are dropping-away too fast. Even now, I can hear the lads in the printing department bitching at me to the effect that no way in hell is that kind of subtlety gonna survive a three-color separation followed by ten thousand printed copies. “You can have the area on his midriff below his arm, or you can have the area to the right of his head, but you cannot have both at once.”

Fourth: “There is something, vaguely … not quite right … about the mountains somewhere around the knees.” All of the sudden, the whole thing looks like … not mountains at all, but (!) a weirdly crinkled piece of paper!! (Hey, Mac! What kind of caper are ya tryin’ to pull on me?! An’ you call yerself a magician?!?!)

Mebbe it’s the not-quite-right way that “that ‘mountain’” looks. Or, mebbe it’s just the fact that the area right below it is opaque black … which after all never exists in nature. "Do whatever you artistically prefer to want to do with the area in front of that triangle, but … please do something (vaguely water-like?..) in the space bounded by those “mountains” and that “island.”

Fifth (?): Having in point #4 been struck by “an opaque-black space,” I find my eye now circling (as the eye always does…) from “the point where it began” to … the point where it now returns: the Vastness of Space. And, (if it may now seem to be such ‘a nit…’) I wonder if it might be a good idea to subtly allow that cloud-bank to fade, at least (and particularly…) upon [only… although the viewer may never notice it…] the left hand side) to black. Or… perhaps, instead… very slightly tweak that right-side edge of the gentleman’s hip so that we have a little more sense of the roundness of that surface.

Five-(A): “And… while I’m at it, and begging your pardon of course sir … that boundary between the edges of the man’s left hand vs the shadows that it casts … do you think perhaps that you could …?”

Does it sound right now like I am splitting hairs? :yes: I intend to.

“of those to whom much is given, much is required.” :RocknRoll: No matter what else might be said, this is an outstanding piece of work.

P.S.: Straight to The Gallery. Please.

Outstanding work. Even when you have some wrong things interms of photorealism, the painterly feel is brilliant. Maybe there’s some things in composition you can improve, but anyways a great piece, some of fresh air between so much photorealistic attempt. 5 stars from here