Hi everyone,
I’m using Blender for work for at least a couple of years right now, and I’ve always found strange that Cycles doesn’t support a batch render function (basically the possibility for render more than one camera subsequently without user interaction).

I’ve found sometimes ago a script on Blender Stack Exchange that permits that but only if used from blender-cli and that render all cameras in the scene or only a choosen one.

I’ve so decided to create an addon that let you choose wich one camera(s) you want to batch render and just let’s the pc work.

Here I’ll post you the first beta released (all code is opensource and hosted on github) hopefull that this could help some other than me. I’m planning on adding some other features and make the code more clean (right now is a bit messy) but it works.

If anyone have ideas or found some bug please let me no here and possibly open a bug report on Github.

The usage for now is really simple:

Here you can find the latest updates and the legacy branch for Blender 2.7x:

Tried (blender v. 2.78) but I can’t see any new option in the render panel…and console doesn’t give me errors.

Could you please add an image showing me where I should find the addon options? 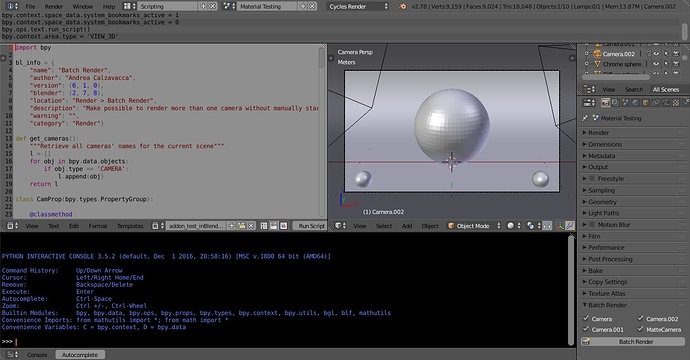 As you can see in the bottom right corner there is the new entry with the camera selected and the batch_render button.
Let me know if you have other problems or if the addon doesn’t work for you.

Works very well with 2.79. Thank you very much…
Please keep it simple. Only need to add “selection of image type” and “batch render ability for multiple projects(files)”, that’s it. Fast and simple…

As answer to your comment you can use the default output tab in render settings to choose the actual image type that that will be saved.
For the second one I think that would be implemented in other ways (like using script that launch blender in cli mode) because opening a new file etc automatically I don’t think is very usefull to do directly from gui. I’ll think of it in any case and see if something comes to my mind.

Nothing really change except the fact that the addon now is divided in more file so that makes it easier to maintain and update with new blender releases.

Small update that introduce the possibility to choose a specific saving path for the render results directly from the already existing output panel located into render properties tab.

Add new feature that make every render created in a separate slot so that you can check them directly inside Blender and save them manually in case something in the process goes wrong.

From now I’ll start to work on some bigger feature introduction so release will slow down a bit. In case of reported bugs I’ll obviusly try to fix them before everything else.

Thanks for the support.

Thank you! Do you plan to release “commercial” version of it 'cause you’re doing great!

Thank you for your feedback. I’m glad to see that my work is helping someone other than me. I don’t have plan for a commercial release (if you intend a paid one). Blender is open source and also is this addon. If you mean something else please explain it to me so can I can answer you in a better way.

Thank you very much for this AddOn! This is something I was exactly looking for. Perfect for my needs.

I see this only now, very useful addon! Thank you for sharing!

Thank you all for the interest.

Small update released but a couple of big bug fixed.

As always you can find the new release on github.

If no one can find new major issue in a bit I’ll pack it all for the first stable release and start working on some other major features.

Thanks for all for the eventual bug report.

Hi Buddy!
You can try oscurart tools! this have a lot of tools for render, includes render batch maker! save a .bat or .sh

Thanks for the tip.
I’ve seen it, but with that you cannot batch render when using blender gui (if I’d understand correctly how it work).
I’ll surely look into it more anyway.

@ParanoidNemo
Thanks for that handy Addon!
It’s not yet working for Blender 2.80

Thanks @Alain.
I know

I’d started a couple of days ago to read the new API. Will port this to 2.80 as soon as I can, I need it too

Hi all!
This one works with Blender 2.8 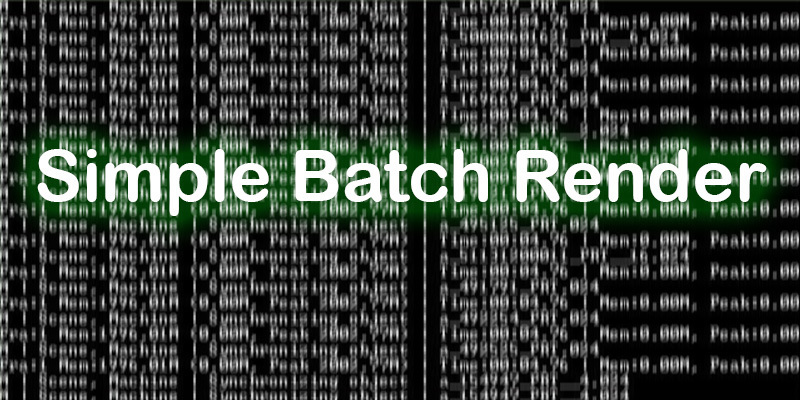 Simple Batch Render Addon makes it very easy to make a .bat file for jobs to render. Can be executed from inside Blender or as a separate .bat file started with from your desktop without having to open up Blender first.