Hello,
I am trying to figure out how to get particles to stack on top of each other, eventually making a pile of particles like you would have a pile of sand. No matter what settings I pick, the particles just intersect with each other and all lay flat on the plane below the emitter. Thoughts?

I believe you will not get your goal with the current particle system.
The game engine allows colliding objects but if you want to simulate sand this would be totally impractical.

Well, I thought it would be possible, as I saw farsthary do it in a video:

My main goal was to pile sand on top of a logo, and then have a wind effect blow away the particles, revealing the image. Guess I’ll have to change things up and think of something different,

It seems like it has been possible recently, I have also been trying to figure out how to do the same thing. Farsthary also had a tutorial showing how to setup the sand. But in the build he is using, his options inside Particles | Fluid is different. 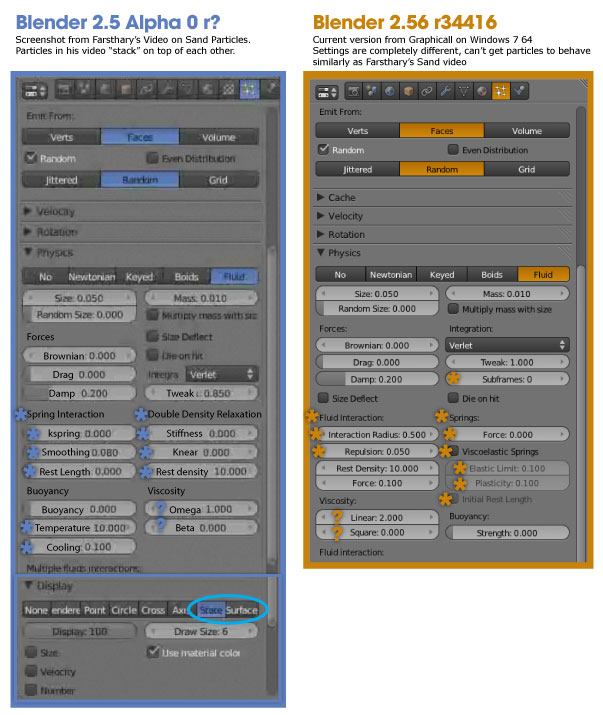 His Sand Video is the link above that dEVabox just listed. He then produced a tutorial on how to do that which is here: http://blip.tv/file/3376773
But sadly his options appear quite differently and no matter what setting I try I can’t get it to work similarly. I do realize that the specific build that Farsthary is using is most likely highly customized to do his bidding (out of reach for mer mortals such as myself).

Here’s a screenshot from his tutorial video of what we’re trying to accomplish. The particles just accumulate. 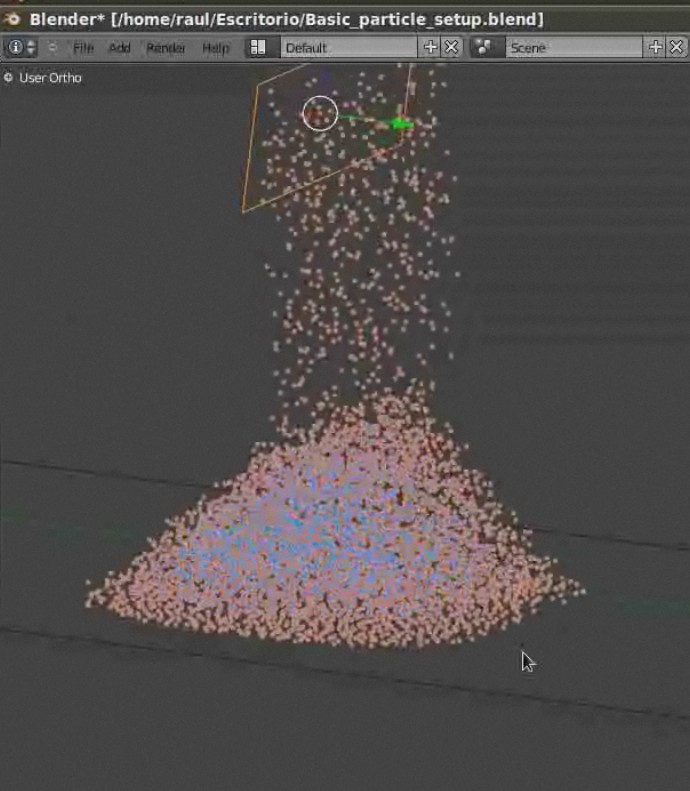 I also know that recently Stephen’s viscoelastic springs patch was merged into the trunk. Read here: http://jahkaparticles.blogspot.com/
Which is most likely the reason for some of the setting changes. Does anyone have any suggestions of how Farsthary’s particles work perfectly, or did he never release those changes?

I did find this guide from him, but most of the settings are not relevant now? Correct me if I’m wrong! http://farsthary.wordpress.com/2010/03/19/introducing-particle-fluids-parametters-function/

I’ve created this sample file which has gone through many many settings over that past few days, the video of an interesting effect is below and it just looks like popcorn (I sorta like it). But I don’t want this effect, ideally they would just accumulate and the pile would grow in height as more particles are added. I can’t get that effect and I’ve experimented with so many settings for days!

Here’s my blend file if anyone wants to check this out and see if they can get the particles to work similar to Farsthary’s videos? FailedParticleTest.blend (401 KB)

Anyone have any helpful suggestions? I’d would love to figure this out!

I would have to agree with Richard Marklew, “I believe you will not get your goal with the current particle system.”

however that being said, i played around with the particle settings of the attachment you posted crazycourier, and think i have something a little closer to what you are after.

In regard to the settings you posted i think you are setting the Repulsion force to high. Also i would remove the drag force. and if this is acceptable i lowered the gravity factor significantly.

Also I thiink that you will need some amount (all be it small) of springs factor.

Ive attached a file i dont think its exactly what you are after but I think its getting closer. You may be able to make improvements on what ive attached.

One thing that improves stability of the simulations quiet significantly is the addition of the subframes. Ive raised it to 4 which seems to remove the popcorn like effect.

Thanks for the help chickencoop! I’ve been able to get something to work slightly, but it takes a enormous amount of particles.

Thanks for the tip on subframes, that was helpful. I’ve actually found that the damp setting gives me better results, and I can increase the tweak setting to counteract the slowing effect of it. That’s probably not right but it works ok. I’m slowly thinking that you guys are correct in the fact that the current system doesn’t have that capability. But I’ve certainly learned a lot more about it!

I’m looking forward to Jahka’s promised video tutorials about the new spring functionality! In time I guess, which is perfectly OK!