Hello out there, fine artists of this forum!

I would like to “stamp” in the shape of a drawing into a plane using bump mapping (and cycles). Could you give me a clue about how this can be done in my project? Here is my approach, in which I would like to control the depth of the stamping. 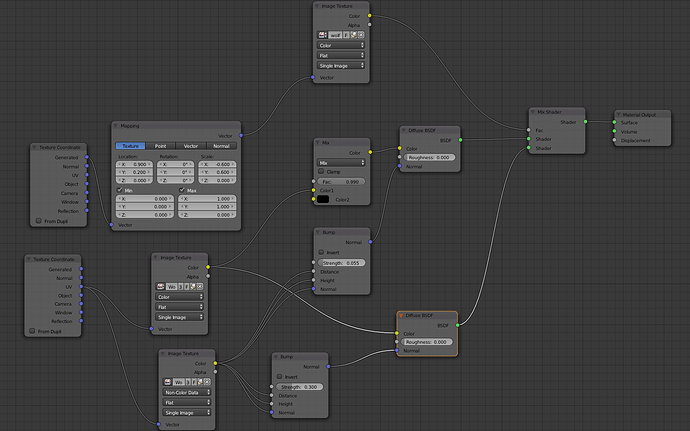 at the moment, i cannot check your blend file, but i’m curious about your lower texture file, and how you use it as a normal and as a value map at the same time…

at least i would understand that the Blue channel could go into the distance/height slot, but the RGB color seems kind of weird.

I’ll try to check the blend tomorrow to see what kind of texture you’re using, but for now i think a simple grayscale texture connected to the ‘height’ slot in your bump node should suffice.

Thank you very much so far! The result is not what I am looking for, but you gave valuable hints and for now I am trying to understand how exactly bump maps work. If you know any good paper about it, pls let me know.
I would like the bump map node to effect the wood texture and with another impact the wolf shape, but I am working on it and have some results already.

I assume you, eppo, created the normal map with crazy bump or some equal program? However the bump map appears to be grayed and being edited with a gaussian diffuser filter, right?

Also:
Uhm, with all due respect, but I think this normal map has absolutely no effect on the image. I disconnected the two links from the normal map node and nothing changed. But also normal maps are left to be understood properly by me.

Not sure if i can recommend any papers - wikipedia, polycount forums maybe, google at the end.
Try this for a starters.
First, i might have messed up something in previous example but this file uses 3 ways to bump things up - http://www.pasteall.org/blend/30047

For other applications difference considered between normal and bump mapping is that “bumping” doesn’t create shadow while normalmap kinda does. Correct me on previous but in general there is minimal visual difference between both; normalmaps are considered better. Here in Cycles nodes Bump node produces vectors which work like normalmap result by “turning” reflected light rays so i assume difference is minimal if there is some.

Blurring. I did say “turning” vectors above. If you have BW image there is no gradual transition on border between black and white it just flips from one possible state to another. Visually that doesn’t look good 9 times out of 10.
Black, 50% gray, white is the same as “below”, zero level, “above” for all these bumping things. Make your maps accordingly and use blur between levels. Bumping and normalmaps can build just a limited height illusion; do not try to push them too far.

I do use Gimp and normalmap addon from Gimp Registry only.

One thing about the displacement input on the material output is that you have to switch Cycles to Experimental mode for the mesh displace features to work. Follow it up with a subsurface modifier to add in detail.

It’s been a while since Experimental feature set is not needed for this effect.
AFAIK Experimental is used for real mesh displacement and it’s still buggy. Does not refresh node changes - you need to switch to Solid then back to Rendered view to see changes and more than often cause Cuda hangs. 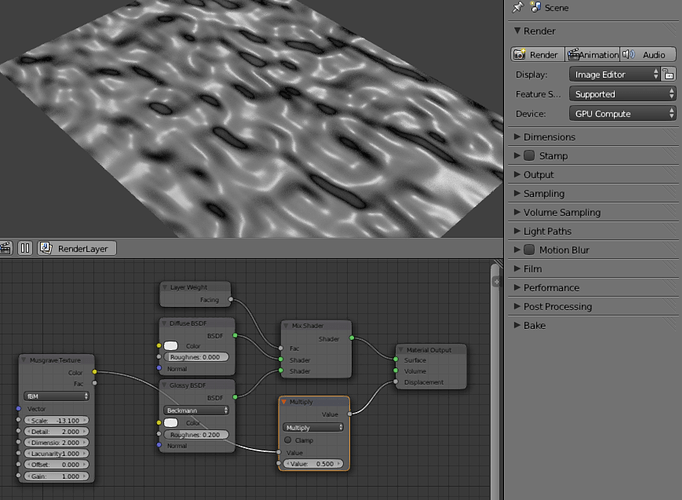