Okay, so I’m trying to make an AT-PT from Star Wars (blueprint) and it’s going really slow and it feels like I’m doing everything wrong. Here’s what I have done so far:

That’s practically nothing and it took me three or four fucking hours (a hint at how much I suck at this). Now I’m really frustrated and I don’t know what to do next and I feel like I did that part wrong, so I guess I’ll just post the .blend file and ask for suggestions. I feel like I don’t have enough done to be asking for help but I don’t know what else to do.

edit: God dammit, I’m sure this is a retarded question, but how do I post the blend file?

You should make a mirrored instance and connect them, to get a better feeling of the whole body. You started with details, I find it easier to have a rough mesh and work out the details afterwards, so I can ‘feel’ what works and what doesn’t.

Posting a blend file works like posting an image, just put the link between URL tags instead of IMG.

lol we have all been there. nico is right your better off roughing out the body first. and dont think youll pull out an ILM render on your first try. your gonna have to live with alot of hit and miss.

0ohhh dont you hate that feeling where you think your making a complete failure? i feel it almost everytime i make a character, especialy the head, i fel good until about 30%, then i freak a bit (oh god its going to suck!) but now ive gotten used to knowing it a natural feeling, i just go on, and after some 20 minutes or so i get confident again by a render test or some tweaking, and then the tweaking is what makes an ok rendeer and CGtalk front page =D

the progress looks nice to me so far, and i really love the at-pt’s in good old rogue squadren games etc. Will keep a look out for progress. Doing things to high amount of ref can be scary to get things perfect, but dont be afraid to do things a little differently or guess what something is =-D

It doesn’t look like it is going wrong. You just dont have that much made yet. I would say u need to work on one part till it is perfect (for instance the front) then move onto a different part. If you try to make every thing at once you will go nuts. I suggest you work on the front for now. Just my suggestion. BTW I love Star Wars stuff. I hope it turns out awesome!!!

you should make a VERY basic model first, like 10-20 faces for each object, and then slowly replace the basic with details.

this is looking very good though

Well, I don’t have anywhere to host it. I thought I could attach it and didn’t realize till after I posted that doesn’t work

Anyway, yeah, I think the render looks all right, but I was more worried about the mesh. I guess I can just post a wire:

I’ve been using tons of tris and stuff because they’re easier in some places and reduce the face count, but everyone says that’s bad. There’s some other stuff I’m kind of worried about that I don’t know how to explain, and might not even matter. I also forgot to bevel some of the edges.

I know to mirror it and everything (I also need to shear it) but I was worried about some other parts, but I thought of some solutions that I’ll try later.

What would be the best approach to adding detail later? Go back and delete the faces and stick new vertices in and then reconnect everything?

Thanks for the tips guys, I’ll try to get more done and posted later today.

Tris aren’t a problem as long as they are on a flat surface. You can get easily rid of them by selecting the faces with tris and hitting Alt+j.

P.S. Try out the mirror modifier of 2.4, it might help modeling.

YAY STAR WARS! good to see some star wars enthusiasts out there :D. most people won’t even know what an at-pt is at first glance. anyways, the modelling seems very sound and detail-oriented. i look forward to seeing the final of this thing. since you started with details, i would say keep detailing as you go, as long as you have a good idea of the shape. be careful not to spend forever obsessing over the details though, you can always add them in later. it might make you feel better to go and get the rough mesh done first, because it makes you feel like you’re making progress. keep going and good luck!

I haven’t gotten anywhere, I don’t have any idea how I’m going to do the front.

You can get easily rid of them by selecting the faces with tris and hitting Alt+j.

I’m not sure what that’s supposed to do, but it doesn’t do anything…

You should be able to use tris and f-gons all you want, so long as you don’t plan on adding a sub-d modifier to the surface.

Well, I’m getting it figured out. It’s 731 faces now, and mostly tris, but that’s the best I seem to be able to manage.

I’m going to go back and add the nose gun and all the other little details that aren’t there yet, and then the legs. I have a feeling the nose gun is going to be extremely difficult.

You can see I forgot to bevel all the edges. I don’t know an easy way to fix that.

I meant that Alt+j converts tris to quads. You can find it also in the menu: Mesh\ Faces\Convert Triangles to Quads. 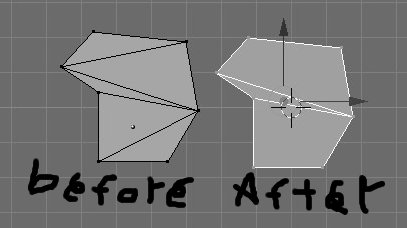 Ah. I don’t think I have any faces like that where there’s actually room to convert two tris into a quad. Or maybe it fixed some that I didn’t notice.

Oh yeah, thanks everyone for the help and feedback so far!

Hey looks good so far! Only thing I would recomemnd doesnt have to do with the m0del

Its just the render…could you try turning on the ao and changing the background from the standard blue? Should make it look even cooler in this early stage

Changed the world and AO, and this is also a more recent version of the model with the chin gun, some detail on the top, and more of the leg. Still not sure how I’m going to do the nose gun. Blender needs better cutting tools.

You could always export it out to wings3d and cut it in there. I think that may have better cutting tools.

Still not sure how I’m going to do the nose gun.

How about making it out of an icosphere and tubes? You could use booleans or keep the turret separate. Booleans may yield nasty looking mesh though.

I know how to make the shape, it’s adding it to the body mesh that scares me. I guess I could just make it a seperate object that is halfway inside the body’s mesh.

How do booleans work/what do they do? I can look this up later, so feel free not to answer. I’m just going to bed right now and too lazy too look it up at the moment.

I didn’t mean to sound so harsh.

I agree that making the turret as a separate mesh is the easier way. At least that is how I would make it. It would be easier to alter the hull afterwards. Also greebling would be easier and it would add less verts to the model.

Some people like to model with bools though I have never gotten too used to them.