Hey i just finished my first Project. Hope you like it. 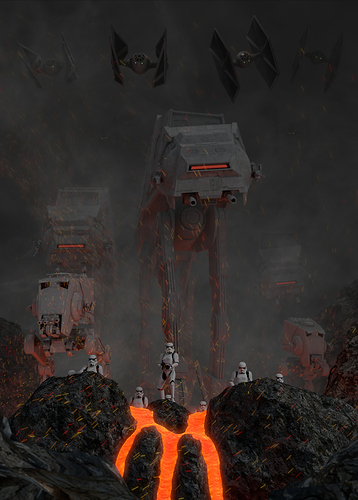 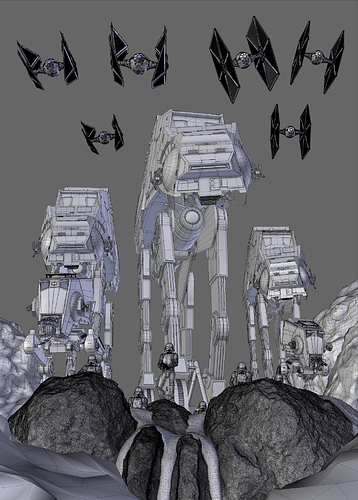 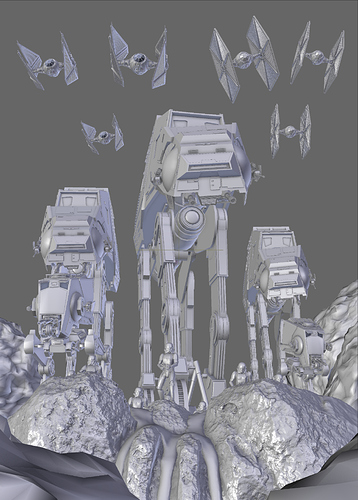 Such a pity that render is not as good as these amazing models. New light setup, shaders and postproduction would work wanders here! For now wireframe looks way better than final image.

I agree on improving the render, wish you luck

A good start, but indeed not quite finished. Models look good, but texturing, light and post can be improved. First of all, the rocks on the foreground don’t mix with the rest. They seem to be separated from the other elements. As well as by the storm troopers, the lava should reflect more on the rocks. Also, I think a little dirt, scratches or rust should be applied on both the storm troopers as well as on the AT AT’s. I mean, look at the terrain they’re crossing, no way they come out this clean.
On a compositing note: I think there is to much order in here. The TI-fighters don’t overlap each other, the same goes for the AT AT’s. This composition might something you’ve deliberately chosen, but it doen’t work for me.
Again, I see the work that has gone into this blend and the potential it has. But that’s also the reason not to rush the texturing and post-processing. Keep improving it with the feedback given here and it will be a very good render. I look forward to the result.

Thanks for the Feedback :)!
Here is the new Version. I added some rust and dirt, also some blood on the Stormtroopers Helmet. Also I add more Tie Fighter and Tie Interceptor and turn on Motion Blur. The Lighting I also recreate.
I hope for feedback from you

great modeling, bad rendering. the materials and lighting is very very blah. i’d agree with the others that the models are better than the final render

Okay Thanks!
But what is so bad? what shoul i change to make it look better?