Well, you guessed it- I’m making a Starbucks frappuccino. I used this ref image for modeling-

And I have an empty one at home for detail references. The one I have at home is slightly different then the ref image, I have modeled accordingly. I took the lables off so I can UV map later, and wrote some notes down for suggestions. But I have a problem: I am using a transparency technique I found somewhere else on this forum- I have the alpha all the way up but I have modified the Raytransp Fresnel, so it is still transparent. But it is all black inside it! It only refracts in small places, like the top and bottom.

I have also tried this by lowering the alpha without the fresnel. But why the black? [Click images for larger view]

*Edit-Crap. I made the cap of the bottle the same material as the bottle. It will be fixed by the next render. 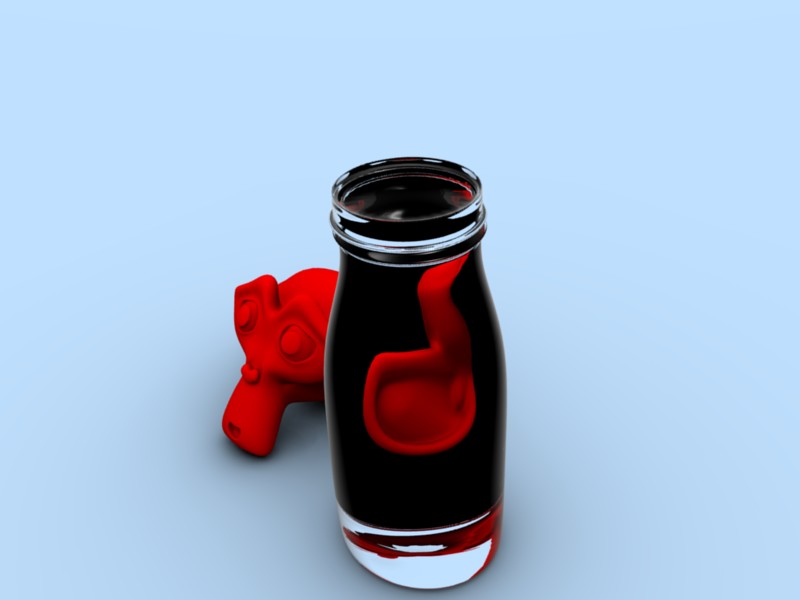 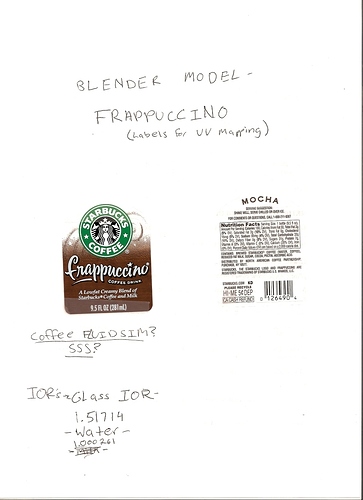 Just a workscreen- Pretty low-poly, except the cap, which still doesn’t have much. 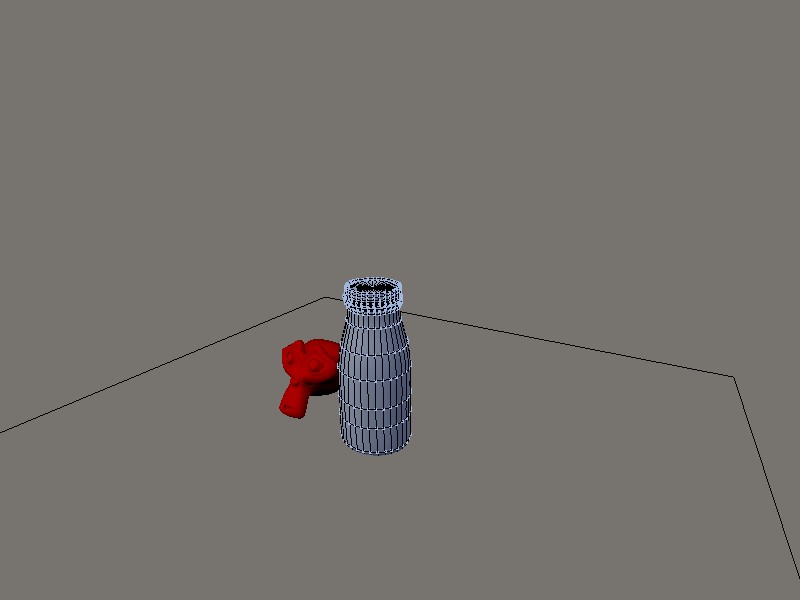 isnt there some one already dothing this!?!?

Yes, Awk34, he is one of my best friends. We both got the idea, and are currently working on it. I have more experience with Blender, but he has potential.

YEA N00BHAXOR. Im a bit farther on mine; I have the cap, a table, and walls. Yours is lookin good!

o i did not know that

Heh Awk you want to go to war with me? I’m feeling confident, because I’m making an extremely strategic move: You will see it in my next update…

And if you actually READ my post up there, I have the cap, I just accidently set the whole mesh to the same material. I have a UV mapped cap already, and imo, it doesn’t look bad.

Indigo! Yes, I did a test with Indigo, and I am overwhelmed with the results! It really brought out the look of the cap, the only thing I have to fix is the glass IOR. It doesn’t really need an IOR, just a roughness to the glass. The bottle itself does not really refract light at all. And I will add the front and back logos in the next update.

Compare the two: (Indigo, and then BI) Click for a larger view- 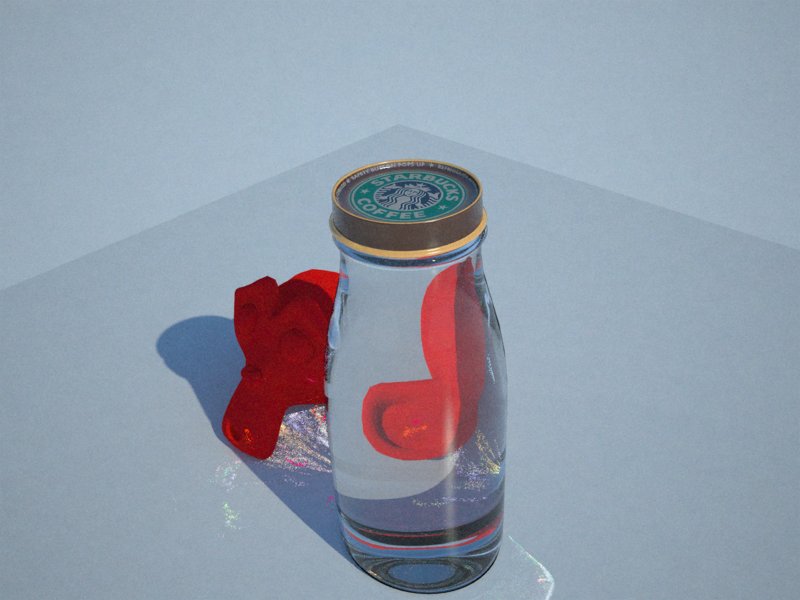 Another angle, BI. 56Minutes and 56 seconds. I’m going to stick with Indigo from now, much better results. 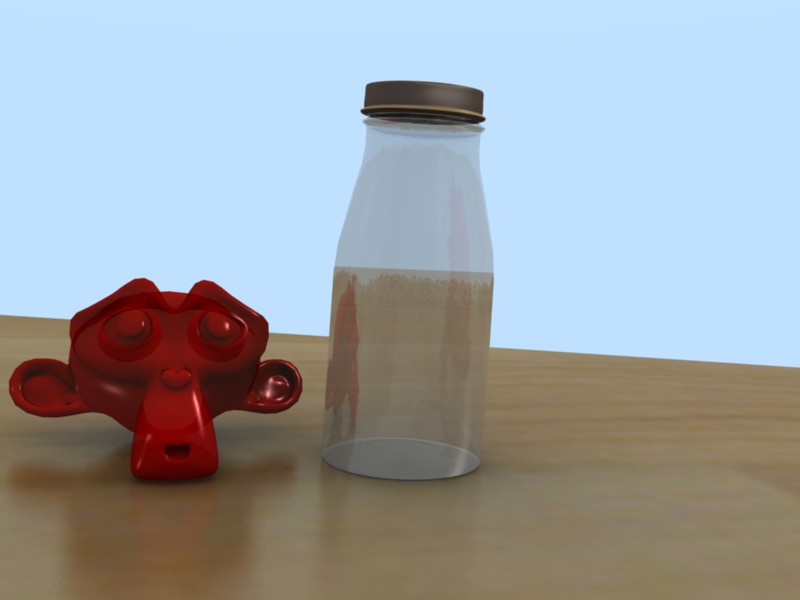 Exactly. Indigo rocks, I prefer Indigo over Yafray in raytracing from now on, lol. Anyway, I have went back to using Fresnel as the glass transparency instead of screwing around with the alpha. (that is what you saw in the previous Indigo Render). And I will leave the IOR at a very slight level, because the bottle doesn’t do much refraction. I just made a Marble Texture and mapped to Nor, to get that rough glass look.

New problem: In Indigo, you must choose an Indigo material along with the Blender material. For the glass, I must choose the transparent Indigo mat, the only one that supports transparency. But it does not allow me to select Albedo! (Image texture, I have the two frappuccino stickers mapped to two empties in the respectable places.) So how do I make the glass transparent and yet still have logos that show?

I will not reply until Thursday, as I will be in Washington DC. I will not be active in Blender at the time- so this thread will gather some dust, unless someone replies to help.

YOYOYO why would I want to o to war with you? You are WAY better in blender than I am. Remember, I just started getting serious about 2 weeks ago?? well, mine is still in progress so check out my thread and post some help pls. c ya.

Keep in mind that the transparency of the glass is almost nothing. The only bit that is noticeably transparent on your reference pic is the base, the rest is just colored by the liquid. The reflectivity is still important, though.

looks delicious. can I order one pls!:evilgrin:

when ever i try it i cant export blender stuff to it…but idk…i might know my problem. =)

I’m having trouble with Blendigo. If anyone has simpler installation guide, can you get it to me? Your Blendigo looks WAY better N00bhaxor!

Back from DC! A lot of crap to see there, gave like $6 to a hobo…pretty fun! I suggest going.

I’m having trouble with Blendigo. If anyone has simpler installation guide, can you get it to me? Your Blendigo looks WAY better N00bhaxor!

Heh, heh, installation guide? [How bout a tutorial?] Here’s a pretty good link, this is how I learned Indigo. Beware of the dreaded render time.

>Hobo Joe: I might not even do the liquid, it depends how much I want to work on my next project. Or if I get bored of the frapp, I haven’t yet. This is good experience to me on render and material settings, because [obviously] modeling didn’t play much of a part in this project.

I still have that transparent mat logo problem- The mat is transparent but I want the stickers (in the same mat) to show fully solid.

N00bhaxor: just messing with a material I found an interesting solution to your problem:

If that is all gobbledigook

then try messing with the alpha and fresnel effect in this blend file to see the effect I am talking about.

ps i never tryed rendering with this technique so it may not work perfectly… also I am not sure how different IOR values will effect it.

>A.vector: Well, I am not worried about IOR, as it is at about 1.01-1.03. Very slight refraction. But thank you! I just remembered that, I learned that before but I totally forgot. So I will use a different method, I will show in my next post if it works.