This is my entry for Blender Artists Weekend Challenge # 261 (“Activation” theme):

The Stargrangers tend to the birth of a new star…

GIMP was used for render layer compositing and post-processing (blur/contrast/color correction), just for a chance to work with a recent version of GIMP, which I’m trying to get back into more these days.

Thank you for your interest,

Thats an impressive star effect, i’m guessing that was more thanks to gimp than blender, i’ve never seen anything quite like that with just blender halos unless you mix doezens of partial effects over one another, but still you methods and effects are inspiring.

I have to wonder, as with many of your pieces whether its the title and the caption thats telling the story instead the piece itself. Not really a crit, its just a personal taste that the piece should be able to tell the whole story rather having to be explained.

i like your image(s). I’m going to ask you if i need someone to create a CD cover for me sometime

lovin the flare. how would you feel about posting a straight-from-Blender shot to compare? just to get an idea of how much postpro was done.
lookin good!

Now that I would kill for a blend file of.
If that was a proper sentence.

The technical aspect of this piece really interests me a lot more than your previous ones. Did you use images/textures within blender to get that effect? Or is it just tons of halos? How much mesh modeling was required for the star? Are all textures procedural? What was your node setup like?

In other words, a quick rundown of the workflow here would be like an early christmas present;).

Attached are some other views of this project.

The second image is actually a demonstration of a starburst effect I prepared based on the interest in this thread. This demonstration uses only Blender’s nodes.

For it to work, the render layer must have vector blur enabled, and there must be some object keyed motion and/or transformation going between two frames for there to be any vector blurring to be done.

This is not motion blur. No Blender motion blur settings were used in this project.

In this project, I have all the star meshes (about 20 objects of varying size, color, etc.) parented to an Empty.

The Empty is scaled between frames 1 and 2, being larger on the second frame, where this render occurs.

Once you see the nodes, as you might imagine, the vector blurring calculations can go very slowly =)

The incremental 1.2, 1.3, etc. values for the vector blur cause there to be more of subtle a transition between blurred images.

One vector blur node feeds the next.

And, yes, that’s all geometry you see there for the star =)

No halos were used in this project. Halos are very powerful and can lead to even better results under certain circumstances, but they can take a very long time to render.

Some objects here are set to wireframe mode for the wild energy surrounding the star being hatched.

This last technique was one I developed during my F1 2007 project, and it’s a technique I’m using in a couple other projects.

The rest of the render node pipeline involves taking the products of the blurs and performing additive/hue/saturation/color/etc. layer treatments.

I hope this information has been helpful – not in the sense of hoping to see this effect reproduced as is, but more that I hope it can be an example of how Blender can be made to do some really cool things if you’re willing to take the time and to experiment with its capabilities. 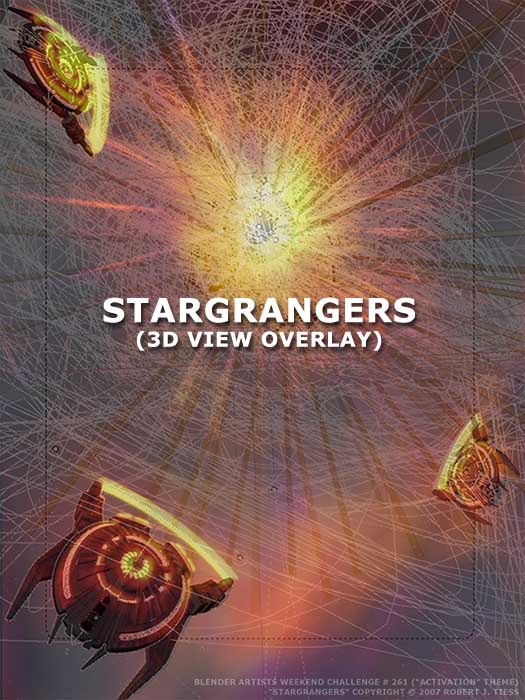 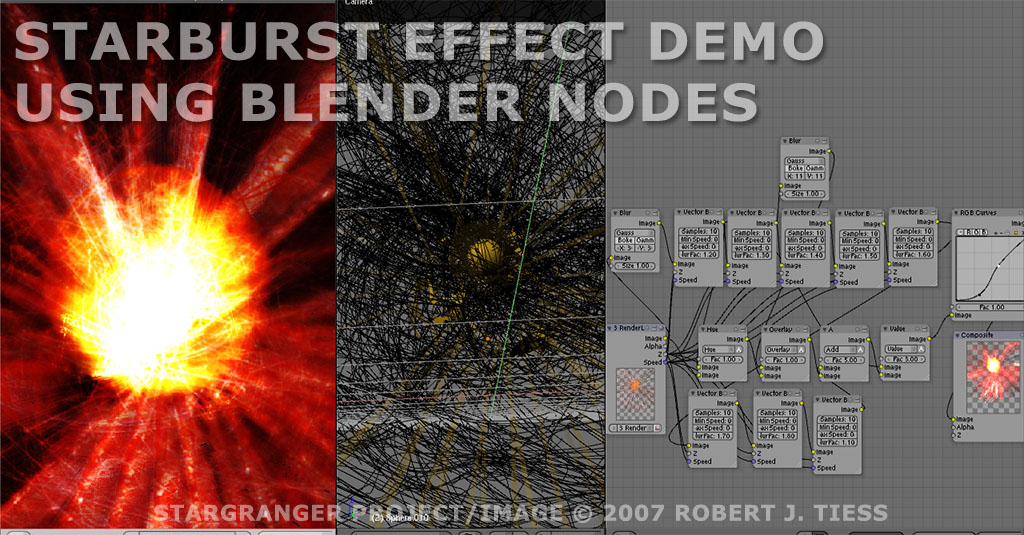