Seeing as the whole world has turned steampunk and I am feeling left out I decided to have a crack at this too.

The idea is to have the brass/copper tubes on her head textured with some copper and some snake. Comp rules say that minor work in PS can be done, wonder if smoke could be added this way? 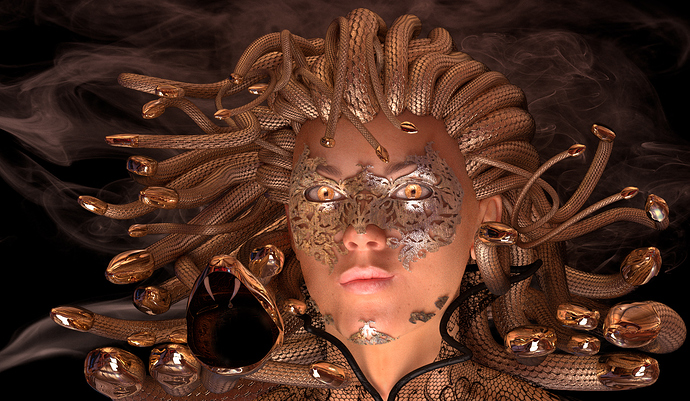 This has potential, please take her lolita goth! I would love too see the end results!

Looking good. There’s a free HDR out there somewhere called Factory_Floor which would do wonders for this. I have it but can’t remember where it came from.

@Hans Zimr, great thanks for looking in.

@joseph raccoon, thank you. Will see maybe how to incorporate this, but my modeling skills are not fantastic.

@theoldghost. Thanks so much for stopping by, really appreciate it. Will have a look for the HDR, in the meantime maybe you will remember. Did you see the Gals in the previous post. :evilgrin:

Did a bit of work today and quite happy with how it is looking??? See what you think. Welcome any ideas. 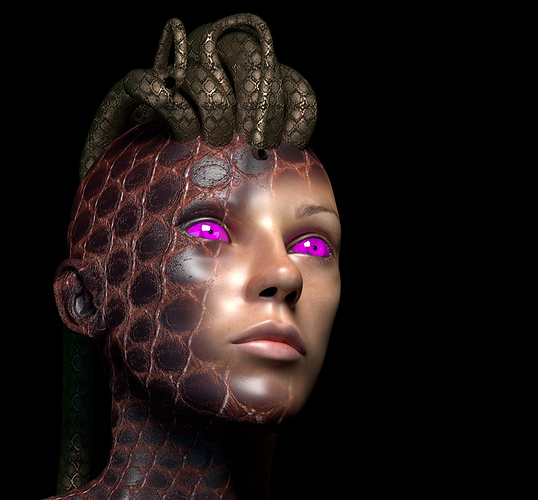 Hair is looking much better to me. Guy I am a little confused through. Steampunk to me brings up brass, copper, and sheet metal.

As usual damn it. It’s not Factory_Floor but Factory_ Catwalk and here is the link.

For starters set your diffuse node to black. Gloss (Beckman) to .0005 maybe and mixed node to say .900 and that is a nice reflection of this HDR. Then you could play with the scale of course. Just a thought.

Welcome to the competition, if I may say so

I’m curious where you may take this to! Great start.

@theoldghost, thanks for taking the time to dig up that HDR, i will most certainly give it a go. Tried to make the brass material better, what do you think? The snake skin is just a place holder, I want to do something similar on the side of the face, idea of half woman, half not blady sure at the moment. Maybe some lace and…lets then not forget leather.

@minoribus. Thanks and I am as curious as you :D. Just really started this on a whim yesterday morning when I had nothing to do. I said to Photox in his thread that I thought of steampunking a girl a while ago. The snakes on her head made of brass are the only thing I am sure of at the moment, I intend to have some smoke/steam coming out of some of them. As I said earlier I am open to suggestions. 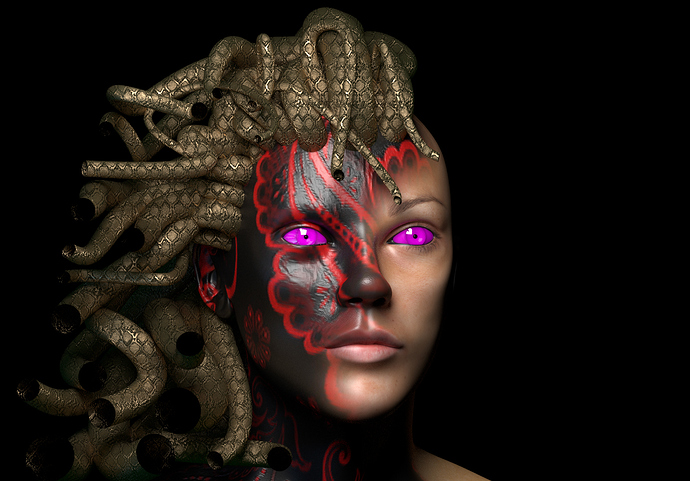 Throw that HDR in there and then simply make your brass highly reflective. I think you might like it.

@theoldghost, got that HDR in and I am liking it, just got it set to environment texture and nothing else at the moment, tried your settings and they look good, but for some reason it pushes render times through the roof???

Still not really sure where I am going with this, just sitting in front of the screen waiting for inspiration to slap me upside the head.

The HDR is set really low and I have a plane at 45 degrees underneath her with a hint of red in it, trying to get a bit of a sinister and macabre feeling to this.

Also tried to give her a bit of a smirk, but that will still need to be worked on.

Had a look , but could not find anything on this. How do I give a bit of random to the map that I used for the scales on the hair? 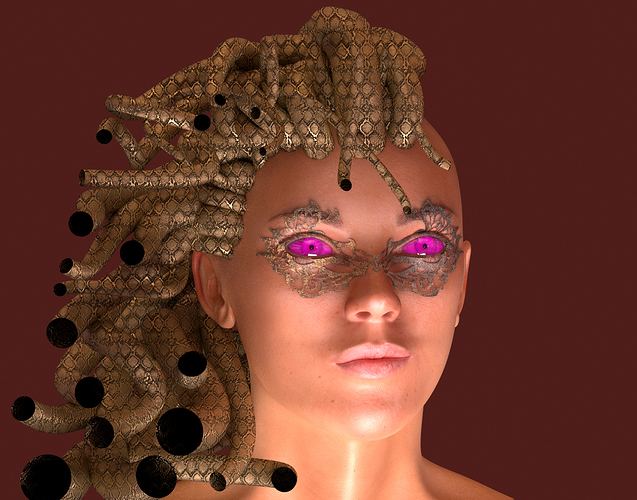 Okay, wow. Like. WOW. The face looks perfect. I love the slight smirk. I’m not too big on the “hair” though. It looks too regular and the diamond texture looks like it’s facing the camera no matter what angle you look at it from.

The skin shader looks awesome in that light. Great. And if you want to give some randomness to the map you can use a node setup like this: 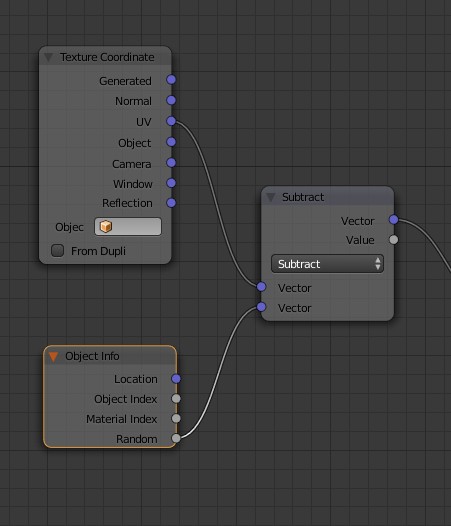 You can plug the right vector output into the image texture node and that should give some variation.

@spitfire2194, thanks for looking in, the hair is not complete. It is supposed to be brass snakes that are on her head, at the moment and I am still unsure what to do at the ends.

@minoribus, thanks for that setup it did add some randomness to the mix, the HDR came from theoldghost and it is really growing on me.

Did some work tonight, not sure if I should leave her as the sweet innocent Medusa or make her as vile as possible, seems when you just jump into something of the cuff you are not sure about anything. :spin: 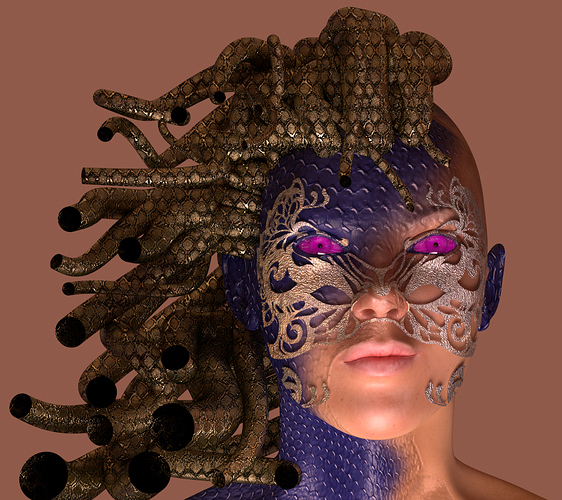 Coming along nicely. I like the skin now. Guy they are only two HDRs in that entire pack. Are you sure it’s a HDR open. Just for the hell of it set the strength up to 2.ooo. Hang on I’m baking yet another damn wall. And, then start backing off.

I’m probably not seeing it because I go overboard with reflection and the HDR settings. Maybe I should start my HDR settings at 0.100 and start working up because this is looking pretty wild now. What do you have in mind for a background if any.

Looking nice. I’m thinking about the scene and the composition. Maybe we could see her through a bulls eye? We are on the inside of a steampunk submarine and she is outside of it in the water. That could frame her nicely. I think there isn’t the need to model much more than the bulls eye and bit of space around it. Just a thought, though.

@theoldghost, strength is @ 2000 on this render :). As I have said a bit earlier in this thread I have no idea where I am going and any form of what to how and where is eluding me, sometimes just sitting for hours playing with a setting hoping for the bulb to switch on, but (no light at the moment).

@minoribus, thanks I will give your suggestion some consideration, saying that time permitting also as I know I have a busy week at work ahead.

Some work done over the weekend, mainly trying to get the hair/snake texture to where I wanted it, think I like it now, what do you guys think?

Played a lot with the eyes and this is the best I have come up with.

Added a bit of clothing which I think I will maybe turn to black lace, she looks like a bit of a rocker chick now.

Still need to get some hair on the left side of the head as well. As ghost was asking start to decide what sort of a background to use.

Also need to add a couple of smoke systems to the mix, last time I tried no matter what colour I made the smoke it remained black, do you guys have any ideas?

Modeled a snake head which I was toying with putting on the ends of the pipes, but just did not look correct, go figure Medusa with snake pipes and no snake heads. :spin: 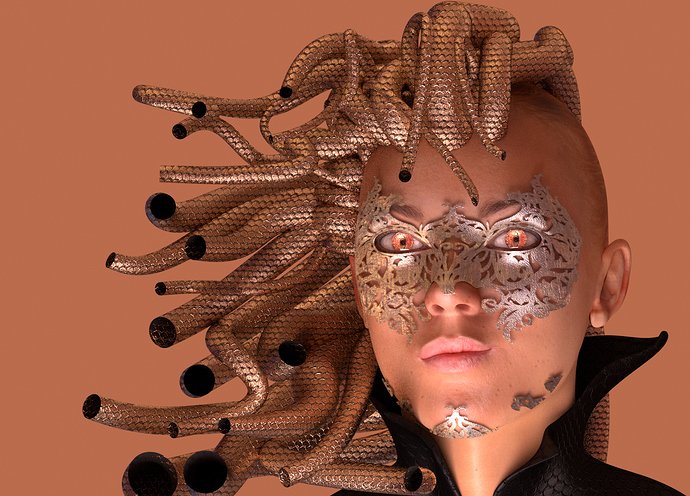 Modeled a snake head which I was toying with putting on the ends of the pipes, but just did not look correct

The project looks great so far, I’ve really enjoyed seeing the way she has morphed in some of your different renders. I do agree that you need something to cover up the ends of those pipes. Was it the actual modeling of the snake head that you didn’t care for, or was it like to many heads? Just curious.

@harley, thanks for looking in, really appreciate it.

The snake head turned out great, it just did not seem to fit in the scene, the best I can maybe describe it is that the more heads I put on the pipes the more the scene seemed cluttered and it seemed that you did not know where to focus, hope that explains it.

I agree with you though that I need to get something on there and quickly too as there is not much time left, fortunately the scene does not take too long to render, about 45 minutes for 1000 samples. Final render can be done at last minute.

One more for today with a background that I think will grow on me. 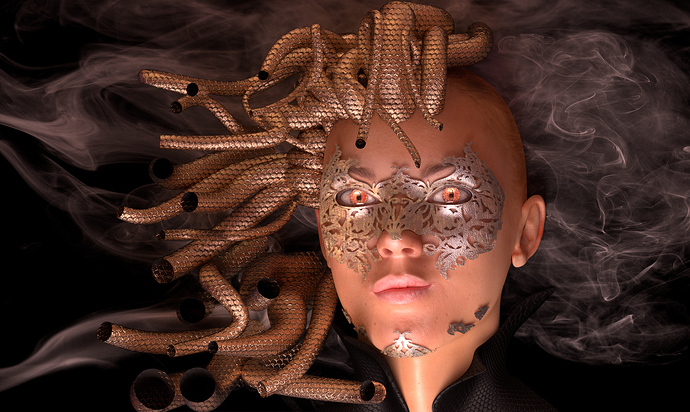 speed7x77, there was some question about the Diffuse Node being black I believe. By making the Diffuse black or almost black it’s then capable of reflecting the entire HDR. Then it’s simply a matter of toning that down with the glossy and mix or maybe a Layer Weight Node. That’s for the plane below hence the .700 and .200 setting. Black in the Diffuse is .010. 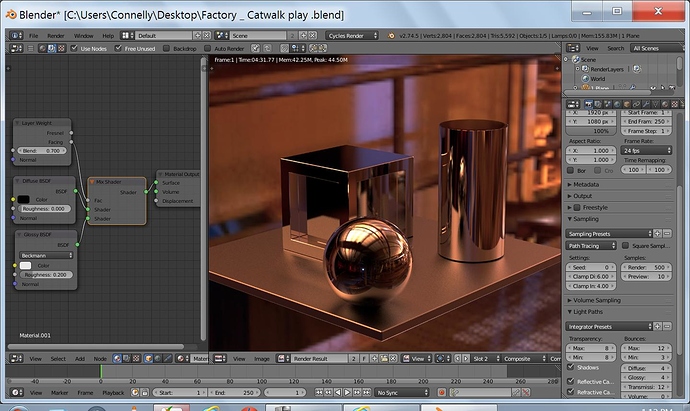 This is looking very nice. The ends have been mentioned before, I think

Have you worked on the normal map lately. Perhaps it’s the changed lighting, but it has more depth now. Very cool.

And a cool shader, Ghost!