Finally, I made it to the finished projects section again!

Still render (although designed as an animation): 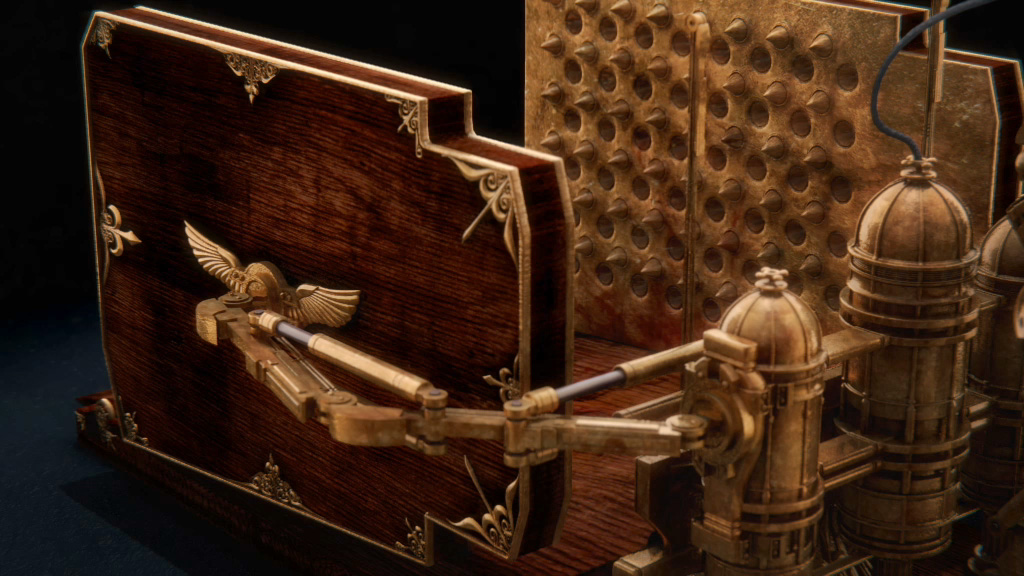 This project had just been waiting on the smoke for a while, ended up doing it with particles and compositing nodes anyway. The project was rendered in Blender Internal, using a fair amount of compositing including the SSGI node, which I would really enjoy as an addition to 2.5 when the timing allows for it. There was a little tweaking in After Effects and Premiere, but most of that was the blue overlay parts and some simple brightness and contrast type tweaks because I like to fiddle.

As part of a studio placement / internship I was set this project with the brief of creating an over the top elaborate rodent annihilation device - as an old piece being shown off in a modern museum ‘showcase’. The end result is rather violent in nature, but a robotic test mouse is used in the scene. I would never build such a device in practice. This issue was raised in the WIP thread, so I thought I would address it here.

There is another project coming soon that I am nearing finished from the same internship. Not as much technical work as this one, mainly a texturing focussed piece involving the noble game of Cricket.

The fire is non-volumetric and I plan to be putting a .blend file or two up soon. They aren’t large files, it’s just I need to make them a little easier to follow and some sort of a writeup on what does what. Might give it a thread of it’s own.

love that dude, its amazing

i have one thought tho hope you dont mind. it would be more sleeker if the floor opened up and the sweeper swept dust into try underneath.

@stvndysn - Cheers. I did think of other ways to do the sweeper, but underneath the platform there is next to no room because the platform snaps down. I planned to have an automatic cheese reloader under there too, but it just didn’t physically fit. Despite being a fantasy sort of object, I wanted it to look like it would work in reality.

ive been following this project for awhile and all i can say is that it is amazing! gallery, no doubt, this demonstrates how good of a program blender is

that was awesome. also i checked your gallery, you have some cool stuff in there. keep up the great work.

i think i see a way to fit both

the sweeper can have cogs on either side so that when the sweeper moves forward the brushes rotate upwards, missing the dust, and locking into original position for sweep back, pushing dust into a small angled gutter, flowing the dust to one side

the cheese dropper could be a pipe coming from a syringe type device at the back which pushes a new piece of cheese, through pipe connected to back plate onto floor.

yah agreed, the cheese should be saved for re-use…

maybe an arm to put it aside for a while?

Very nice indeed, throw the sound effects of the mouse getting torched eeeekkkkkkk. I like your style Ben Dansie. Ps, I must look into this compositing with nodes, I have seen some very nice work done this way…i also liked the lil extra, the guts on the trap

Very good. Why not make those “balloons” stay longer on the screen so that we slow readers can read the whole thing?

@All - Thanks for the comments and the suggestions on the cheese reloading and such, but there came a time when I had to say ‘enough’ on the design and just start. Also, there was a time where I had done a lot of fiddling and declared it ‘finished’.

@zanos - I had slowed it down once, would be fairly simple to extend it more as the middle of the writing bits is a still frame. However, this is aimed as a portfolio piece, so it will be chopped up and edited into a reel anyway.

hahagreat work!!! That little mouse is so cute, and.... you are so evilhoho. only a joke```
5stars from me

congrats on the blendernation thing

I love the testing part

To the Gallery with thee!

Hey Ben, great work :eek:, could you tell something about lighting setup? how did you get these nice speculars on the cylindrical shapes?

Cool, I love the style.