Got started on this due to boredom with some of my other projects.
I’m am sure it’s not done or even if I’ll take it any further. Then again it my be my crowning glory. Sort of a thorny crown devoid of jewels. :spin:
At any rate I’m always open to and up for suggestions from my friends here.
It’s rendered in Cycles at 500 passes. No AO because I just didn’t like any of the settings I tried.
It’s lit with a single light emitting sphere behind the flame (which was added in Gimp).
Thanks in advance for any crits.
Els 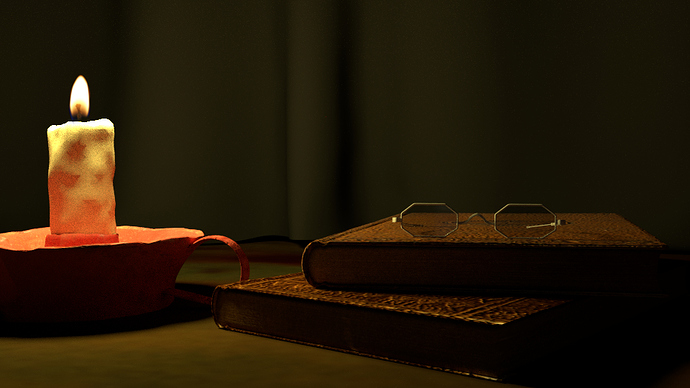 Thanks Robert,
You’re right I have sort of ignored the candle for the books and glasses. It does need some shine to it. Glad you liked the flame. I think I really started this to have a scene with a candle so I could see how a Gimp added flame would look.

Technically it’s a good render, no really obvious flaws or things you did wrong, but the main issue is that it’s really plain. Boring. Pointless.
I don’t mean to sound harsh, but artistically there’s nothing interesting to look at, no details and no story.

This isn’t something you can fix by putting some extra objects and detail in it, it’s something you have to think about when coming up with the initial idea.

If this was nothing more than a test of your skill, or an exercise, then by all means good job

I do like the flame. Have you tried adding a flame in anything else without using Gimp or any other external problem? I’ve been looking for a way to add some flame simulation in a detailed scene in blender. I’m just stubborn that way.

I really like the texture of the books in this scene. I’d be curious to see how the candle looks on a higher sample rate. Did you use subsurface scattering on the candle?