Still working on my ship

Here’s the latest images, I hare rebuilt almost every part of it but the engines. 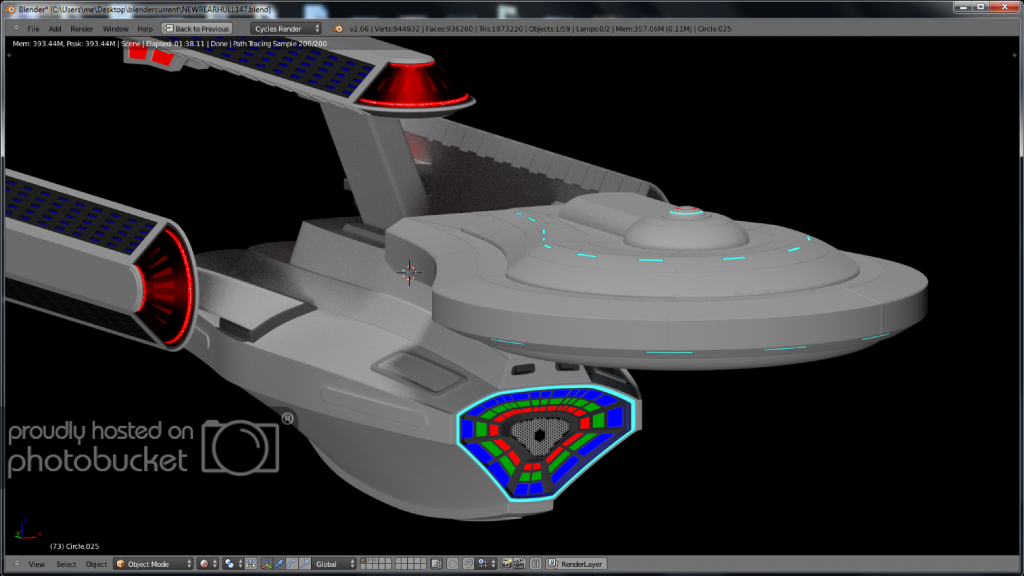 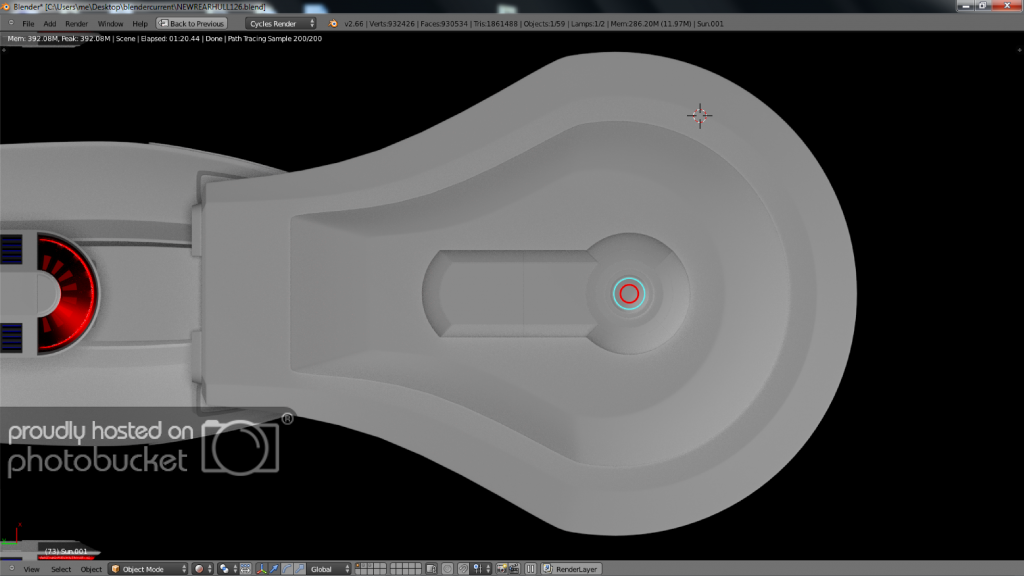 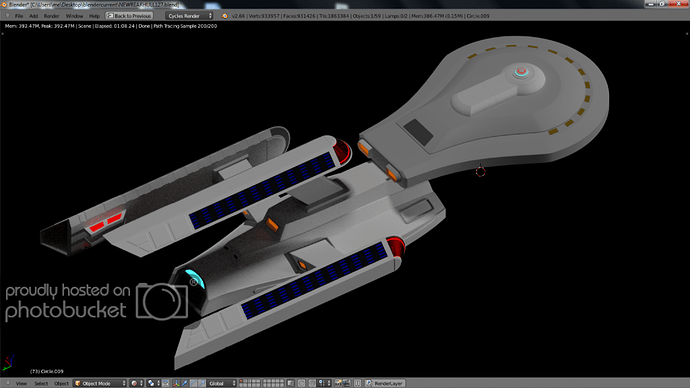 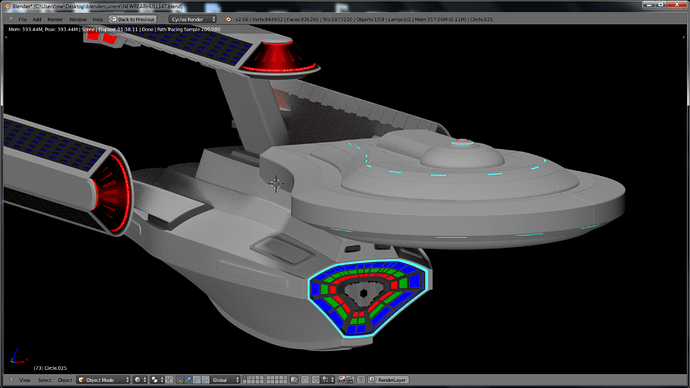 btw feel free to use my engines on it :

I noticed there wasn't a jet engine available on blendswap, soI made one for use with aircrafts etc, preferably an airliner/passenger jet... Contains two fans, one main fan and one small fan inside. __~17k polys or ~34k tris in total.__ small fan has...

I’ve not yet tested it in space/vaccum, but it might just work

i like star trek ships and models and i don’t think i know how to do what you have done in blender yet!

Simply as an opinion i don’t like the ratio of length of the “bridge/head” bit to body… the head section seems very long…
In the 3/4 off to the side view where we see front to back… the body appears bulky and like it could be sailing through water… even though space obviously has no resistance so an aerodynamic look has no function… I think shrinking the body section and playing a bit with the size of the nacelles could end up with a “sexier” looking ship.

I will keep watching your thoughts and progress! I <3 star wars but i don’t mind trek too much either hehe

i like star trek ships and models and i don’t think i know how to do what you have done in blender yet!

Simply as an opinion i don’t like the ratio of length of the “bridge/head” bit to body… the head section seems very long…
In the 3/4 off to the side view where we see front to back… the body appears bulky and like it could be sailing through water… even though space obviously has no resistance so an aerodynamic look has no function… I think shrinking the body section and playing a bit with the size of the nacelles could end up with a “sexier” looking ship.

I will keep watching your thoughts and progress! I <3 star wars but i don’t mind trek too much either hehe

Thanks for the reply. It’s nice to get some.

As to the issues you raised, first off I can try to help you with blender. Making the ship really wasn’t too hard. The most important commands to master were subsurf mod, extruding, beveling, loop cutting and inset faces.

Here’s a useful tutorial someone hsowed me to help in one of the hard and important parts: Making hull/armor panels.

One of the most important things to remember is to use the subsurf mod to get your shape, then apply it as it’s hard to do detailed work with the subsurf on, since it distorts things like sharp edges.

It is very useful, indispensable in fact, for getting the basic overall shape done, but when you start, say, cutting holes in the ship or molding panels, it becomes a pain. Know when to leave it up and when to apply it.

Another useful tool for this is the inset face command, in edit mode hit ctrl F to bring up the face menu and look for inset faces. Very useful, but has issues so check the entire perimeter before moving on when you use it on something.

Beveling is useful and not too hard. To make the "saucer) (Or maybe I should say lander) section was easy with the bevel while the subsurf was on. Make a 64 count circle, delete all verts about one loop pase the middle poine going backwards, connect the two end verts with a face, pull them back and scale them along the x axis to narrow it. Now add a loop cut to the angled back section, scale is a little along the x axis to narrow it then bevel. You should have a nice curved section like I got, especially if you have subsurf on when making it.

If you are really green at blender, I do recommend an ebook to help. I’m not spamming since I’m not making money, but here’s a book I bought that was a huge help to me.

Build Your Own Rocket Bike: Sci-Fi Modeling in Blender

I can’t recommend this enough.

As to other issues…

I know the landing section/rear hull are not the same proportions as a normal fed ship. All the way back to the original, the ships were proportioned to have the saucer far more massive and voluminous than the rear hull, especially if you don’t count the nacelles and pylons. The idea was the rear section contained the warp engines and the anti matter (EEP!) which was the really dangerous stuff that was most likely to go boom, and the saucer was meant to be an emergency survival system in case something really, Really, REALLY bad happened in the rear hull.

So the saucer could hold everyone as a sort of life boat in case the rear hull was FUBARed. You’ll notice that the rear hull usually had no impulse engine as if there was a separation it was assumed to be lost. So in general the saucer was far larger as it was meant to hold everything but the warp engines and related systems plus the shuttle bay. In fact the lower part was usually called 'the engineering section".

Well, the Hephaestus (My ship here) was different. Her sections were meant to function separately, to separate and reunite in some cases as SOP. The landing section was meant to be able to enter atmosphere, land, operate, take off and reunite with the rear hull. The lander would sometimes have to land to carry out disaster relief efforts as it contained a load of various scale replicators and was meant to provide disaster relief in case of something really bad happening.

While the lander was on the ground the rear section would be fully functional and heavily armed, serving “high guard” duty since a lot of disasters are or unnatural origin and sometimes you need to stop the people who caused a disaster from interfering with the relief efforts.

So that’s mostly why the two sections are much closer in overall volume and size than a normal fed ship. (Hephaestus was built with stolen fed tech, but she was never a fed ship.)

As to steamlining, as you can imagine now the lander section need some. The rear hull doesn’t really need it, but I got into it with some real hardcase trek fhans who were saying all ships had to be streamlines to allow subspace to flow over them. Yeah, right. When I mentioned that borg ships were plenty fast, they got into the whole 'borg use transwarp drive not subspace warp" and I got out of it.

If you have more questions or want more help with blender I’ll do what I can. I’ll usually referr you to better blender gurus than me.

Here’s a few more views showing the relation in size between the lander and the high guard section. 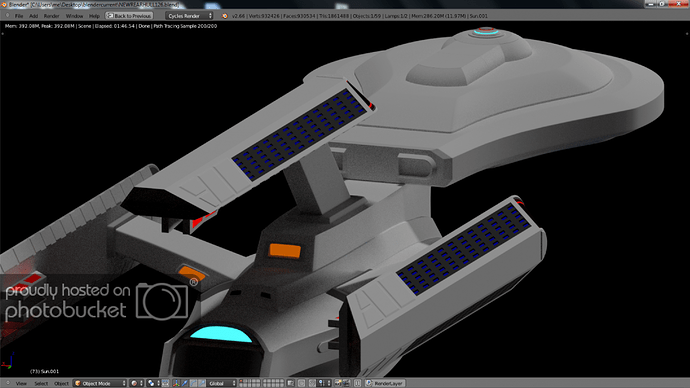 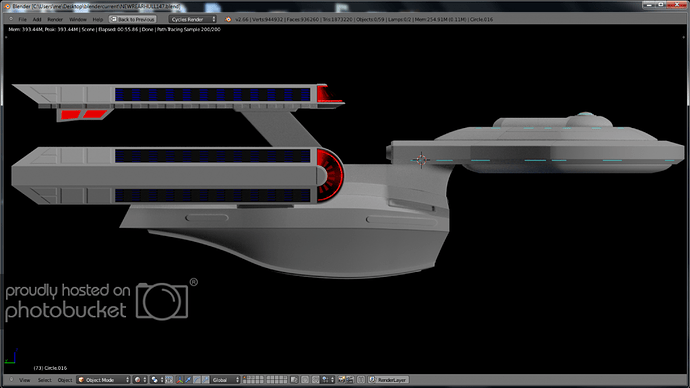 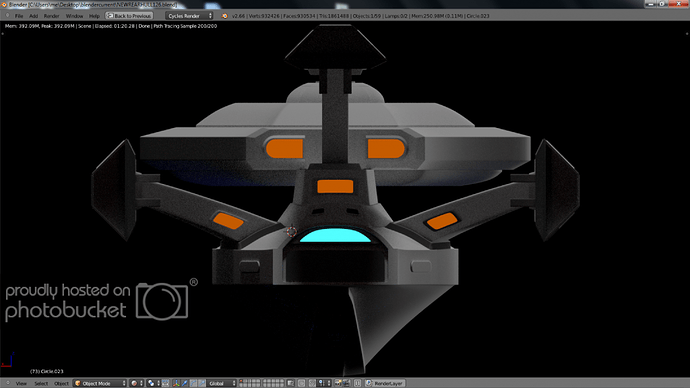 If anything this a is a reversal of the usual fed proportions as the high guard section, even sans nacelles, is roughly equal to the lander section in terms of volume. She also has her own impulse engines. 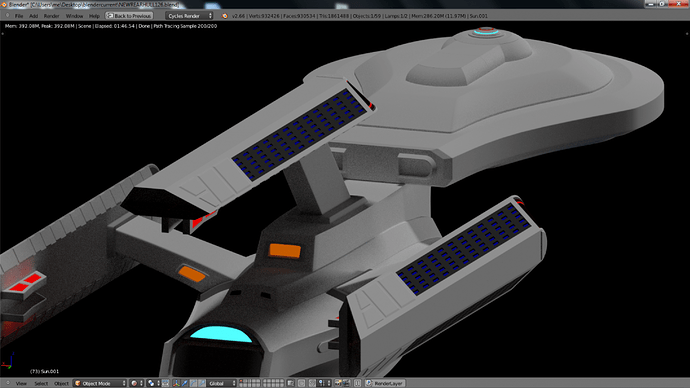 BTW, I hope it’s Ok to link to a tutorial on another site here and to plug a product I’ve bought and am not making any money on but might help someone here.

yeah i like the 3/4 rear shot and the side shot… probably nothing changed lol but i do like the look from those angles…
I think it would be cool to put some glow effects on the nacelles and impulse drives… separate the two and put a space background with a nebula:P

Now that you have told me the story… the lander (saucer) is crying out for some phaser banks?

hehe or even some shuttle bays around its rim?

Oh, yeah, the saucer already has a rear shuttlebay I added after this pic. it will also have 4 or 5 phaser tracks along it, the idea being the saucer could serve as a fortress while on the ground to defend against attack. 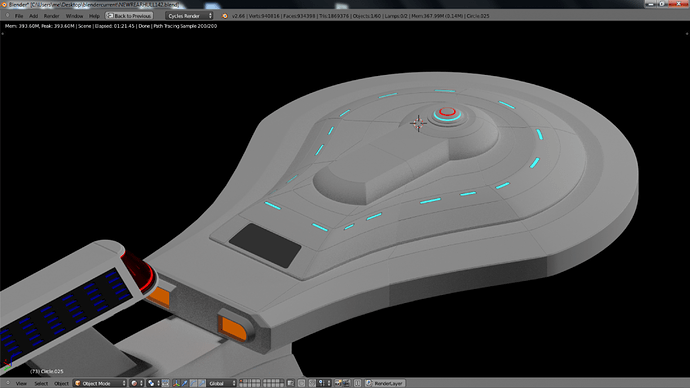 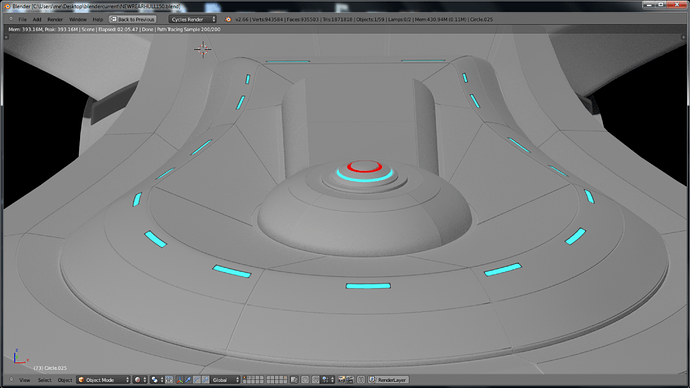 Redid sensors, added phasers and redid the main array to neaten it up and mute the colors a little. 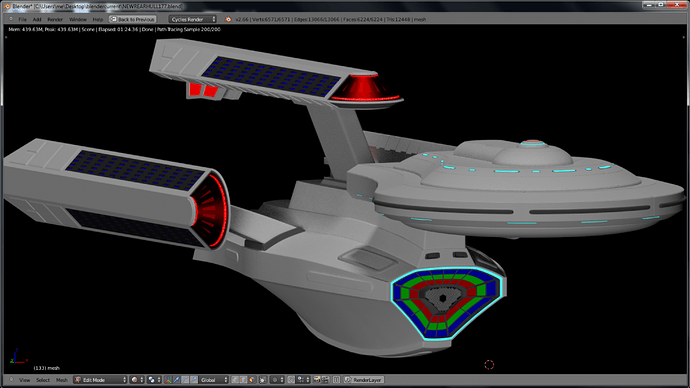 Great model, as I have said before. I don’t particularly like the front thing, though; the thing with the red, green and blue and all that. It seems too dull to be backlit, and too weird to be painted. So if that’s supposed to be lit up, bump up that emission value and add a glow in the compositor.

I wanted the colors to be deep, maybe I can kick up the output without making the colors lighter. I’ve never done the compositer thing yet, I suppose I’ll need to learn how to now. BTW, is there a command to make the camera go to the current window view?

I think Ctrl+Alt+Num 0 is what you’re looking for.

Thanks. it sort of works but does not completely match the camera view to the current view, I hope that happens soon.

BTW, someone said he wasn’t too happy with the sensor/deflector array, which was the next bit I was working on. I’m posting a close up of it not as anything like a “Nyah! In your face!” to the guy who said he didn’t like it but rather to show it in close up and to show the work I’ve done with it. If anyone has any opinions on it I am submitting this for review, so go ahead.

I shaped the rear hull (High guard section) to look like fed tech was used but in a different way by someone with different values and priorities. I like the cyan rim better now that it’s kind of broken up by those structural support members. 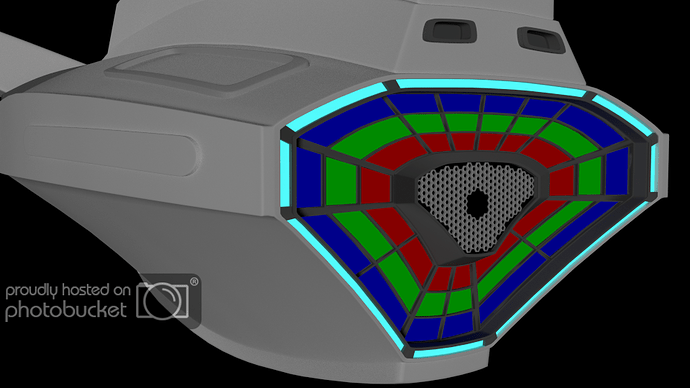 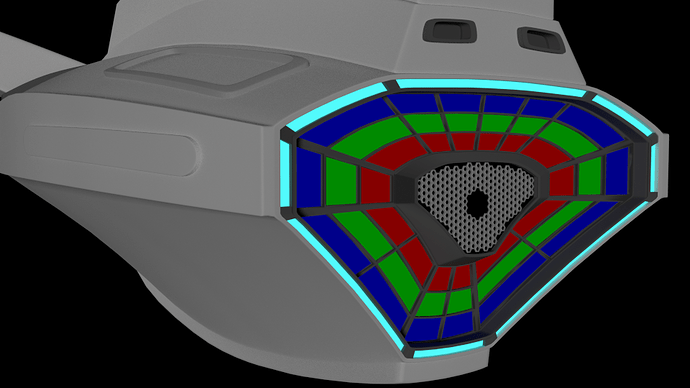 Haven’t done a lot lately, but did do a new engine. 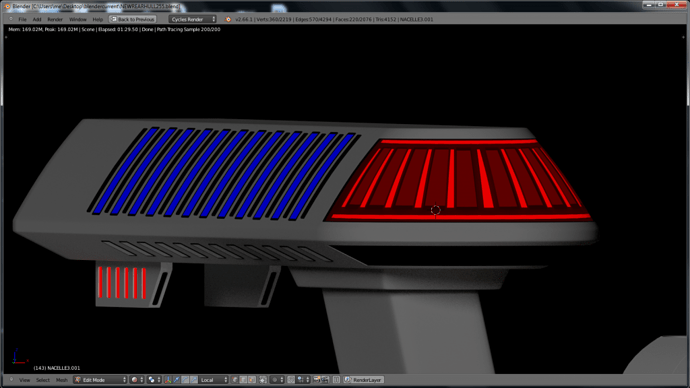 For the technical record, the bit in front is a bussard collector, not sure what the dark opening under it is. In operation the vertical light bars would sweep in from the outer edges to the middle in sequence. The duller glowey bits between and behind them are where the hydrogen is gathered. The horizontal strips are on constantly and I think they impart some charge to the interstellar hydrogen to make it easier for the collector fields to attract and gather in.

The projections at the rear are inspired by the original enterprise’s nacelles that had the projections on the upper rear. In my case these are heat sinks for the warp engine.

The blue glowing windows are for the warp coils, the ship is based on TNG fed tech and it seems to need blowing blue windows for the warp coils. The vents under them are emergency plasma vents to minimize damage in event of a malfunction. The strips between the windows are forcefield bulkheads mean to activate in an emergency to isloate a malfunctioning coil and minimize damage. 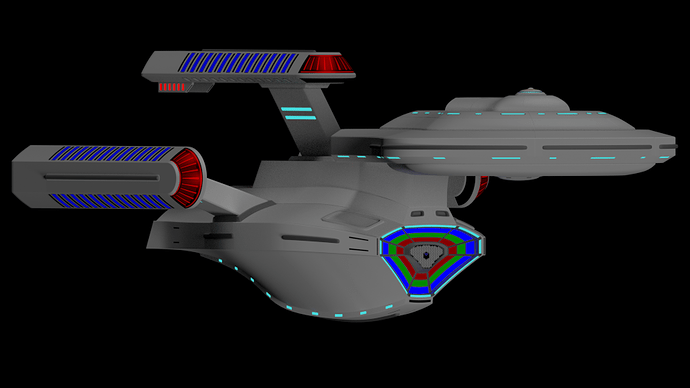 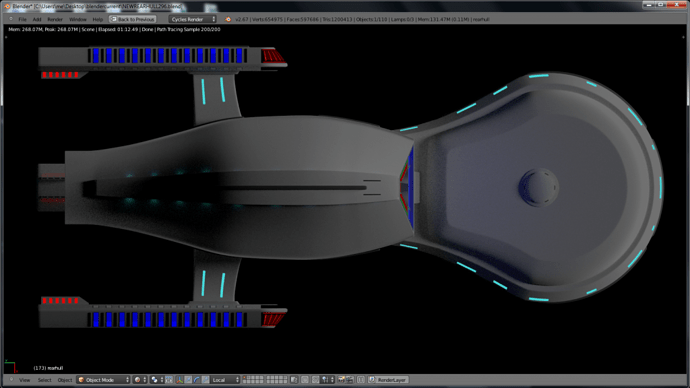 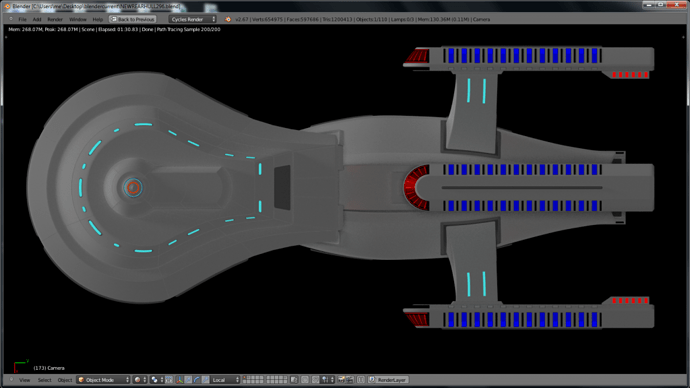 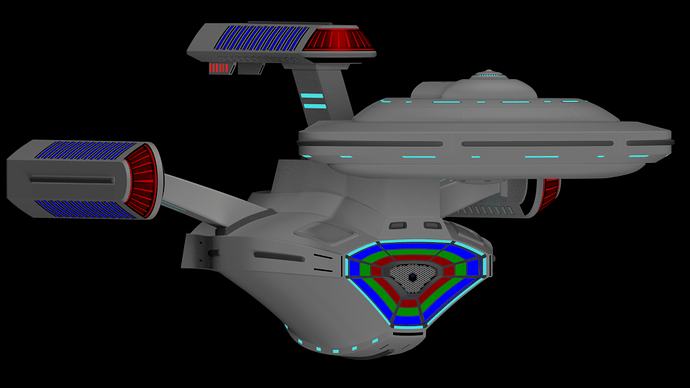