I’m trying to make a muscular skin texture for a model atm. I’ve increased the detail with mutired, and I’m sculpting in muscle detail to later bake, and reapply to the low poly version.

I’m getting some strange oddities with texturing on the arms, though. See this image 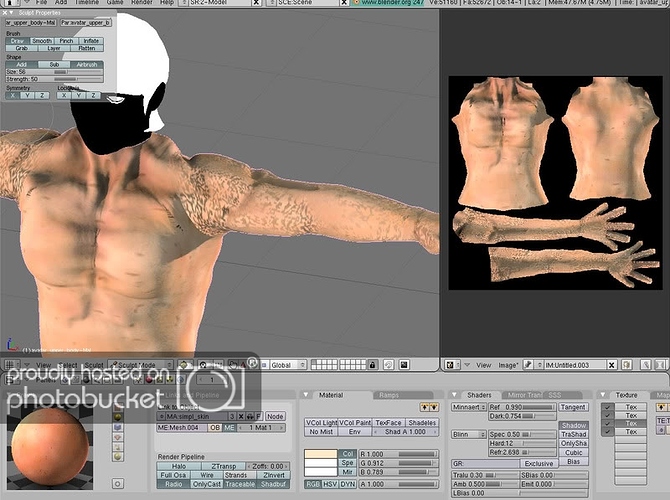 The arms are far more mottled, for some reason. It appears as if the texture is incredibly stretched there. I’ve tried with both UV and Orco mapping, the result is the same. Also tried with AO in raytrace and approximate modes. Same result too.

I thought I might somehow have a lower detail on the arms, but as this image shows, the vertex density is roughly the same on both the arms and the body. I can’t see why it won’t work. 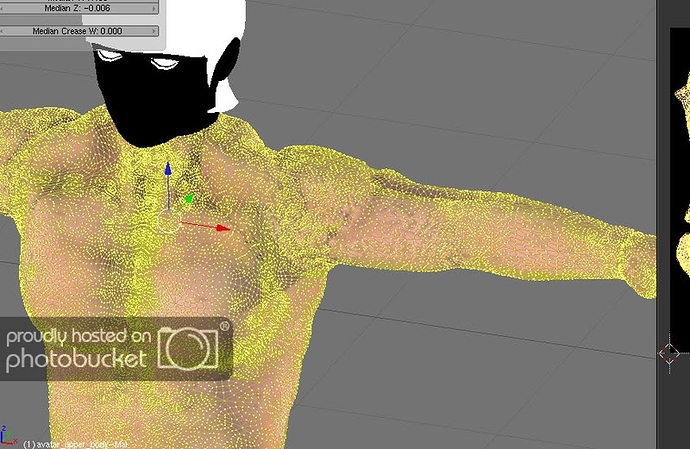 If you look in the first image, you might notice there’s only texture for one arm. For this model, the arms are identical to each other, and a single texture area is applied to both. I’m using sculpt with x axis symmetry on to make sure this isn’t problematic. Could have something to do with it though.

The skin I’m using is a material I got here: http://www.blender-materials.org/index.php?action=view&material=56-simple-skin

Can anyone advise as to why this doesn’t work right? I can supply my .blend file if need be too.

I assume you’ve baked your material in the texture.
But by doubling the Uvs of the arm, you got a doubled bake.
This might couse the artefacts.
It would be better to move the UVs of one Arm in another place. you can move them back after baking.

The model isn’t mine. It’s the second life avatar, so I don’t know completely how it’s constructed… I don’t really know enough to do that. Can you point me to a tutorial, or give a quick guide?

Change the 3Dview to editMode.
Goto UVeditor and press the “sync UV and mesh selection” button.
Now select the armUVs.
Back to the 3dview: Only the Arms are selected now in the 3Dview.
Deselect one Arm.
To the UVeditor again: You grab the selected Vertices with “g” and move them outward.
Now you can bake again.
After baking, you can move the arms UVs back in place.

I don’t think I’ll even have to move them back after. Since this particular model is just for working with and making the skin, only the baked texture will be exported.

Will try it now

Hmm, well, it’s working, but it’s having an annoying side effect.

The two arm uvs seem to be linked at one end, and moving one set out of the image leaves an odd stretched line between them. Any idea how I can get rid of this?

My Initial thought was merely to delete the vertices of one arm, but I fear that would cause the sculpt symmetry to not work, and mess things up considerably. Is there any way to unlink the UVs so that this stretching doesn’t appear?

I used mesh > split, which seems to have solved this stretch issue without breaking the symmetry