Hi guys , in these days I’m working on a scene representing an old and torn down wall.
i’ve sculpted the wall and baked 4k normals and ao to use with the low poly mesh, then I’ve made several attempt of texture painting the wall: the results were discouraging , material looked fake.
I’m starting to think that , to achieve more realistic results , I’ll need some kind of procedural texture, but I’d like to have your insight about it. Tomorrow I’ll post some screen, now it’s 3.30 o clock.
what i’d like to achieve is a concrete material with scratches and moss based on the geometry of the normals or ao.

Provide more info, or better yet, a picture of the type of concrete you’re going for, so as to get a feel for what kind of procedural approaches might be appropriate.

Ok, there we go with some screes to let you understand what is going on better: the first and the second are how the scene looks in the viewport and the highpoly version from where I baked AO & Normals. In viewport the wall texture is not that bad, but when I render it ( third image) it becomes dull and the right wall has this 2005 game look , it seems a wall with a bad texture on it, ahahhaha. The fourth image is the node setup I’m using for the wall, while the last one is a new procedural material I’m trying to achieve something. At the end of the day I’d like a look similar to the one in the first figure, but procedural ( or some advice to make it look better). When I see some Corona render ( look at this, for istance, both floor and wall https://corona-renderer.com/homepage/wp-content/uploads/2014/11/Corona-Test-6-by-Bertrand-Benoit.jpg), concrete walls look like fantastic and realistic, I’d like to get closer to a realistic look while having a torn down wall. 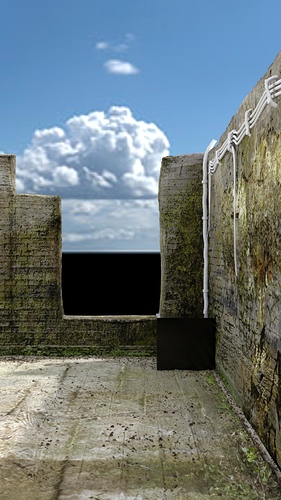 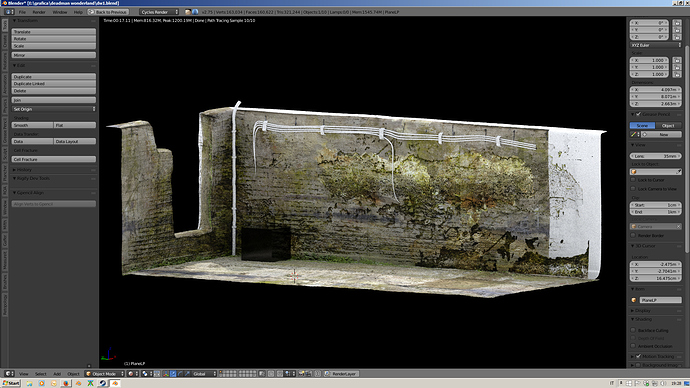 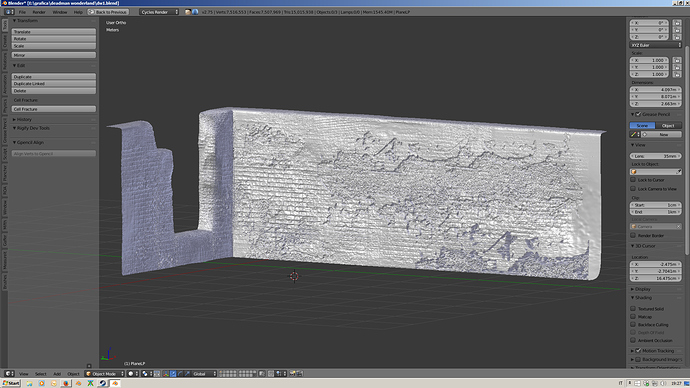 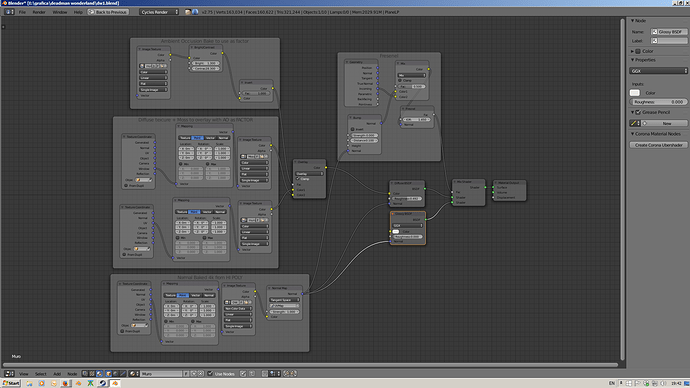 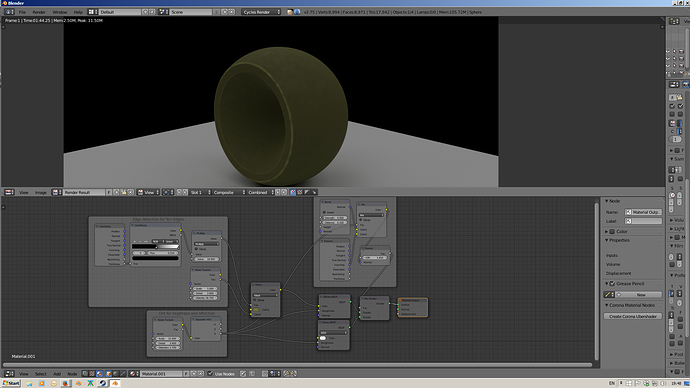 i see a bit of a issue

not the texture but the partial window

would be a lot easier using UV texture and displacement maps

I see your point, but this is a design chioce. I want a worn down look, and as much the aging process goes on the lines of the bricks and the perfect square of the opening tend to loosen up.
Check this page out, for istance: http://www.123rf.com/photo_9749689_old-long-narrow-worn-down-bricks-make-a-wall.html
As you can see, bricks are not so much lined up and the opening tends to soften. On damaged structures this goes on even more.
Of course I’d aim to a perfect lines in a modern building scene or something like that, but in a scene like this I think that a more tidy look would not work.

would be a lot easier using UV texture and displacement maps

I was thinking to create a semi procedural texture, using the AO as an input factor of where the bumps are.
Do you think it could work?

AO has to do with lighting

you must play with multi proc textures to get something more like your model ! 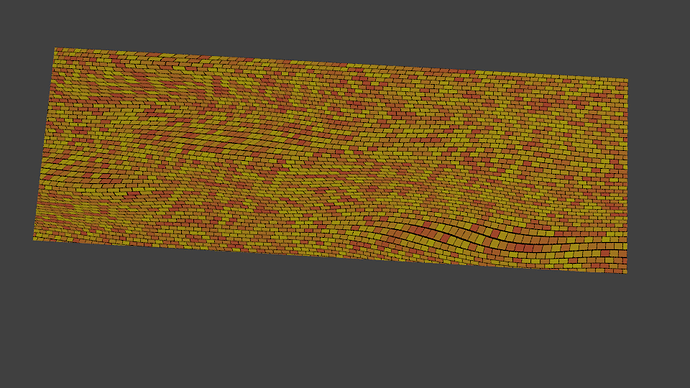 Haven’t had time to look into this, but I noticed a couple of things in the material setup:

A couple of notes on this one too:

Don’t be afraid to try the musgrave texture, it works waaaaay better than noise especially for bumps (except for what I assume is floating point inaccuracies at extreme zooms), and with the correct settings can be a lot more spatially varied. Don’t check results with colors, use an exaggerated bump output as preview instead. For colors to work correctly using musgrave, you’re basically forced to do some rescaling of the output (which can be impossible to guesstimate).

The highres model looks absolutely gorgeous btw. My main issue with the shaded version is the apparent vertical seam, but maybe this is what you want and looks better up close. 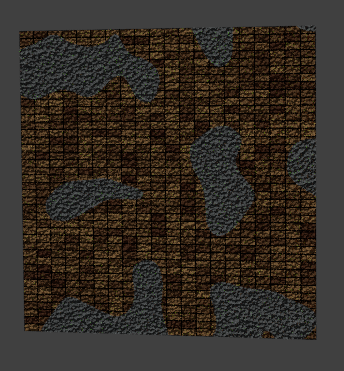 thank you for you insights, tonight I’ll try to follow some of your advices. I’ve just tested a little bit with musgrave as suggested by Carlg, and I must say we are coming close to the look i’m trying to achive. 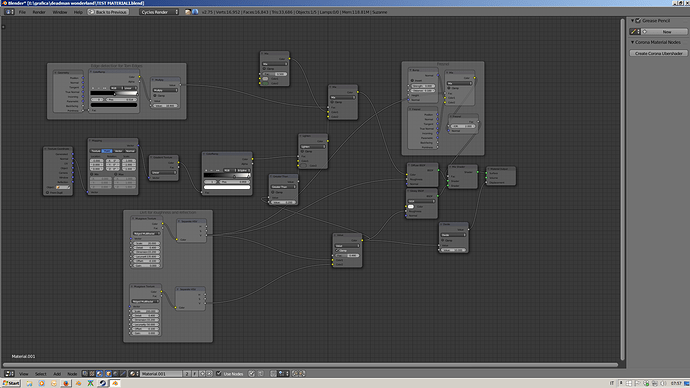 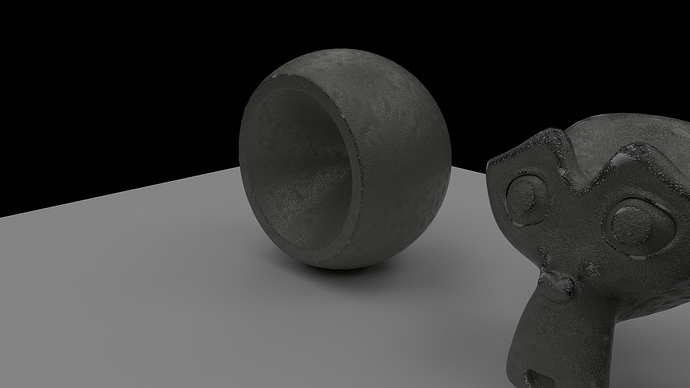 You might want to ask yourself “how was the concrete put there”? Here is an image I took outside at work, where concrete have been filled against wooden planks, clearly leaving impression of wood on the concrete itself: 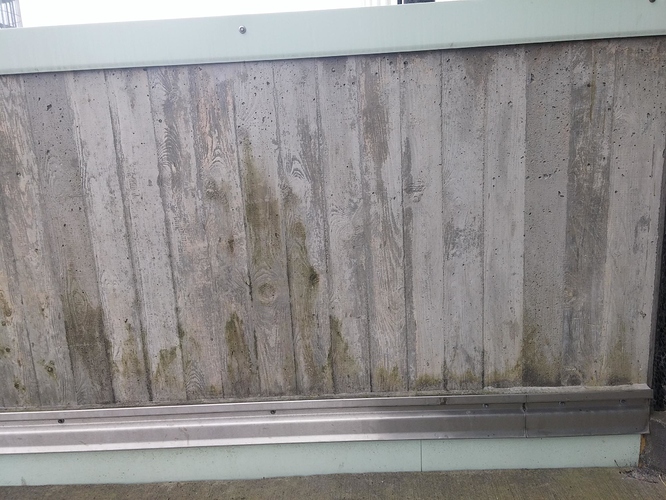 In this weekend I’m gonna try some test. I’m still confused about what to do. I’ve tried several procedural texture, but I was not satisfied. The last one I’ve tried was a brick texture from cgtexture with some grunge on it, i’ll have to think about it, probably is not that bad. 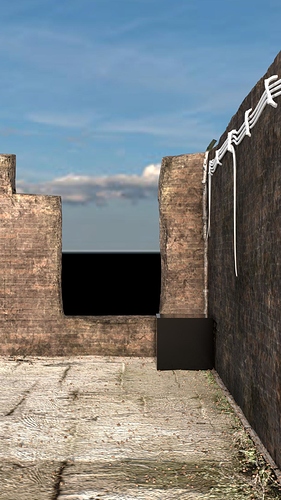 test.jpg1079×1918 269 KB
there it is the new material: i’ve baked with xnormal several maps ( normals, ao, curvature , height) and used it on the low poly model in substance painter. I think this is the best result I’ve got after trying some variations with procedural texture.
Any advice?
fdfxd September 5, 2015, 4:38am #17

this video is really really interesting!! I’m watching right now. I guess if in blender there’s the posisbility to tint only the higlights like it does here with the bluish curve.