Howdy! I started with a bear tutorial, then a chair and somehow ended up with this. However Im not to sure about the lighting from the window and how it casts, and for some reason the open book on the table just doesn’t look right, ive tried changing the texture a few times and added some Subsurface but I just cant seem to nail it down. Any ideas? 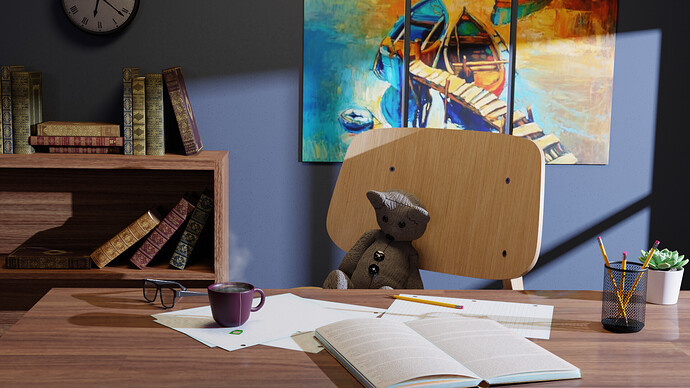 Looks great! Here’s some ideas, what I’d do to try and improve the book: Primarily what I noticed first isn’t anything about the 3D but about the composition and lines of interest (how your eyes move through the piece). First I noticed the teddy, then that beautiful painting on the wall, then the mug, then the bookshelf, and then the pencils in the cup, and only last the book. A bit zigzagy and directionless. And yet the book, while last, is the only thing with truly strong diagonal lines in the entire piece and also goes in the opposite angle to the light shadow on the wall (the light direction). That makes it different and yet it didn’t feel as eye-catching. It felt unbalanced (to me at least). Even the leaning books on the bookshelf follow the line. Maybe reorienting the book so it’s mirrored could help? Or maybe flipping the painting in the back so the peer in it changes direction could help? Or both? I don’t guarantee it would help, just worth experimenting with imo.

As for the book itself, there’s two things I noticed. The top page(s) seem too perfect. Maybe bend them and tilt them a bit? Y’know, as if one corner is pushed down. That would also help with the shadow gradient on them feeling too boring and artificial. And the second thing is, the shadow the book casts on the left of itself. It seems off to me and I don’t know why. Maybe it’s too bright and warm? For some reason I feel like the book is hovering a bit. See how the mug has a dark part of the shadow right next to itself? The glasses as well. That really puts them on the surface. The book doesn’t have that.

Yeah the shadow from the book makes sense, looking at it now it looks like it has no falloff just a ridged line. as for the balance of the picture itself i think may have over done it lol, i was going for a cluttered but not messy look. Ill may try to exchange the places the book shelf and the painting and make the books tilt in the same direction, one thought is having the sunlight mainly on the painting than the bookshelf so its more of a high light than the shelf? thx for the input!

A hardback cover would be thicker, I believe.