I’m currently building a decor for a sci-fi setting, and one of its elements is that laser signalisation is used to mark temporary “streets” for coming emergency vehicles, danger areas, directions, etc.

I managed to make something that gave the desired effect; a particle system of red spotlights near the floor looks enough like laser dots for satisfaction, but render time wise this is grossly inefficient. Even with shadow-less lamps, this is still 66 light sources, and it only forms a short segment, I’d need several times that to make an actual street.

I tried making it with a shadow box instead, a single light inside a “shadow only” cube with holes in the bottom, but it needed to be close to the floor to look good, and if it’s possible to make an object cast a shadow from only one light and ignore the others, I don’t know it. So this method didn’t work with what I know to do.

I could also use a halo object to generate red dots, but they would only look shiny as long as the background isn’t too light, they’d be red, not red light.

I can’t make the dots part of the floor texture because I want to move the thing around. I could however create a transparent plane to place such a texture right over the floor. This would however take more work time than I’d save in render time, and I’m not sure the effect would be better than with the “halo” option.

Does anyone have suggestions on how to best make it?
Thank you!

Picture: what I currently have. 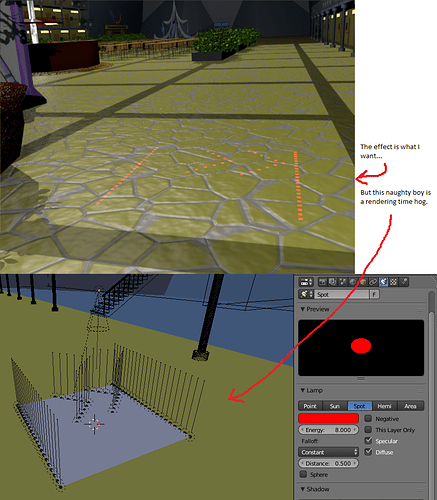 Make a separate texture for the lights, map it to a seperate UV, and map the UV with a “UV Project” modifier. Then you can move the projection around with the UV Project anchor, and project the lights on to anything you want on the cheap.

Oh thanks! I never used that, I’ll see if I can figure it out!

Edit:
Alright, I played with a new document to test it. I didn’t manage to make it work at all so far, but from the help files I’ve looked at, it doesn’t look like it does what I want to do anyway.

I’ve never used UV Project, maybe I’d go that route if I knew how to use it. But without it, here would be my first attempt: 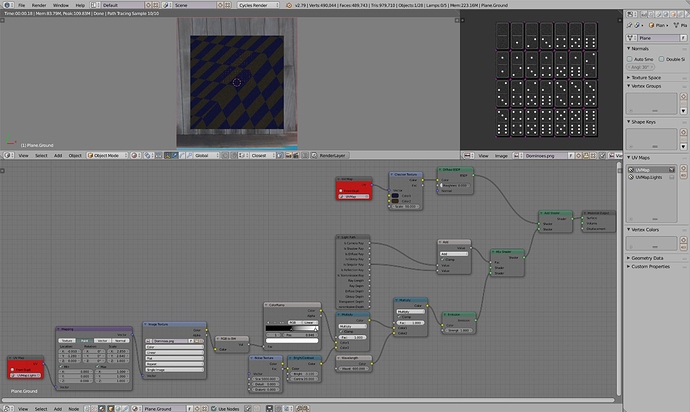 It might get complex if you want to project many lights on the same floor. You’ll have to consider yourself the visibility level you want, I just put camera and singular ray in there as a (to me) logical example. It’s basically based on multiple UVs.

Since floors are something I normally leave MIS turned on for and tiny lights is something I turn MIS off for, and you can’t separate it within a material, I might even consider a small transparent rectangle hovering above the floor with the “domino masking effect” (in my case above) switching between transparent and emission. That way I could turn the MIS off only for the lights and have slightly easier visibility controls on the object level. The emission shader would then also be set to camera invisible and only leave its effect.

Thank both of you. Sorry I sounded a bit dismissive yesterday Dudecon, I was frustrated being unable to make it work, but I didn’t mean to sound abrasive, when all you did was try to help.

I’m considering settling for halos (not quite realisticly laser-like, but recognisable as representing laser dots), but I’ll try your suggestion too!