Suggestions on modelling a reptilian alien?

I am trying to model an alien leg and finding it difficult to know the best way to model it in a manageable way. I do hope to animate it, with probably as many as 10 in a scene, and at least 3 at a time, so I need to keep it relatively low poly. Since I’m still experimenting to get it looking good, I wanted to keep it easy to modify, use curves & modifiers etc. I need to post the question so I don’t lose all my steam on this!

The question I have is, what is the best approach to model the following type of object?

It is somewhat insect-like in shape (long & thin, angular, with a curve to it), but with some more reptilian-feeling surface features (raised “panels” or indented ridges). (The neck is snake-like too)
See the attachment, which shows several thoughts. I’m still experimenting to see what looks best - and what I can manage to make.

I was trying to use a bevelled curve, for example, with a non-symetrical, bifurcated cross-sectional object… uh, vaguely like the outline of an acorn, if you get what I mean. I guess screen shots would have helped, eh? And then taper it. Found it difficult to control, and I couldn’t figure how to repeat a pattern down the length of the leg. I found that the Array modifier doesn’t work on curves. Yet?

I tried box modelling one segment and used the Array modifier on that, I then used a Lattice to taper and curve it. But I had to restart the segment because the end-points weren’t meeting up. I think I had it working at one point earlier and generated the length of it but I obviously need to read the instructions several more times, because it’s not repeating.
Bah. Getting a bit frustrated.

I thought of modelling just the outline and then using a large stamp to raise/lower the surface in Sculpt mode but I think it would result in way too many polys for animation. I will need to save that for the fine detailling (and a bump/displacement map). I understand how to do all of this in principle, but this is definately a practical learning stretch!

Maybe a displacement map would be the best plan. Which, alas, means immediately diving back into trying to UV map properly. I’d hope to save that for later. Sigh.

FYI. I’ve restarted an old project - my first real project in Blender actually, from about 6 or 7 years ago (never posted anything from it and I think it’s lost now, but it was typical newbie spaceship movie). It started as ships only, but version 2 was envisioned as a true short animation with human and alien characters visible. While my general knowledge of Blender is pretty good now, it has been difficult to find time to spend on practical experience. So the project got shelved for a long time. LIke you care

Anyway, I started working on it again, redesigned my alien race to be nastier-looking, worked up some okay sketches, and started modelling. I’ve found organic modelling tricky, even with all the new tools. Several things didn’t seem to work quite (as well?) as I expected. Maybe I need to redo the BSoD tutorial again.
“Automatic” grouping to the armature seemed to work for only about half the vertices for example, and the result was very messy. The base of the b-bone neck jumped wildly away from the body whenever I posed the head, for instance. I think vertices were in/not in incorrect groups.
I ended up using the Skinny script to generate the base mesh, which worked at least. Still most of the model to do though. Hopefully I can get the rest of the mesh to work properly. 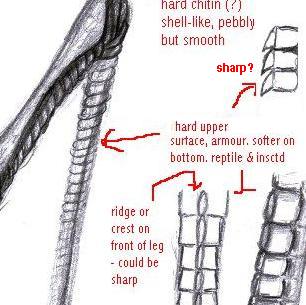 First thing is to use the armature modifier to join the mesh to the armature,
then use the weight paint option to assign weight influence to each bone to create the vertex groups,
second, use the dupli frame options to make a pattern follow the lentght of a curve that you shape to resemble your leg.
Also use the mirror modifier while modeling or model the alian and then delete one side and mirror the other for semitry.
hope this helps

Thanks for the suggestions.

I’d forgotten about using dupliframe, I haven’t used it much. So far, I ended up using using the lattice to deform it, going back and forth between that and editing the curve.

I will have to review weight painting again, especially for the snaky-neck part. I got my armature somewhat working now at least. I will probably use Mirror for some of it, but it is actually 3-legged and so I’ll end up having to use spin/duplicate a big part of it.

Thanks again! I think I’ll start a WIP soon.