Summer isn’t too far away (in my hemisphere anyway), so here is my latest project. I’m trying to push myself with my renders - it’s the first time I’ve had two characters interacting. Please let me know what you think. 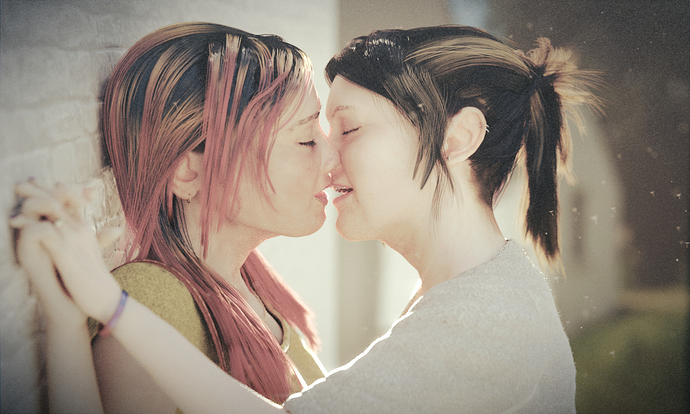 Here is the wireframe at multires level 1: 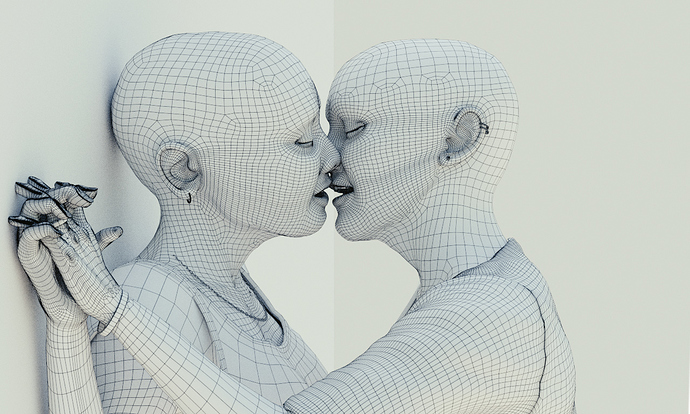 Edit: And a robot remix: 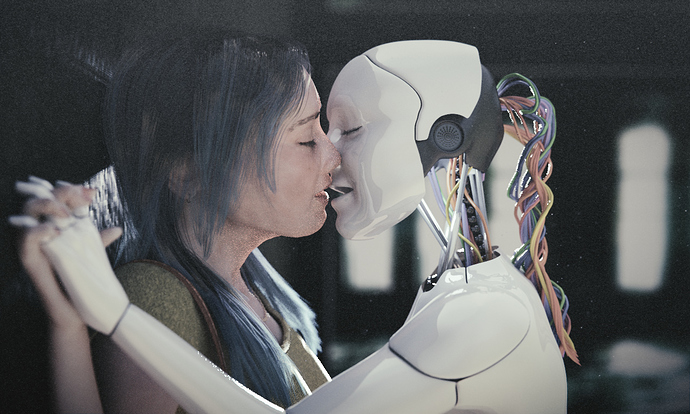 Wow the lighting is really good.
It looks almost like a photo.

Wow! That is insanely realistic looking, swmo! The lighting really sells it! There might be a few things that look strange upon closer inspection, but as a whole the women, the hair, the environment and particles are totally believable looking.

When I click on the thumbnail I expected this to have been your reference image! Incredible to see a 3D render with so much passion, it vaults it into another realm entirely!

One of the best blender humans I’ve seen.

When I click on the thumbnail I expected this to have been your reference image!

The hair looks a bit strange. Other than that, photorealistic!

Excellent. For some reason it looks as if they’re both crying: Summer is over and so is their love story?

wow, swmo, you are progressing very fast!. this is amazing, beautiful, sensitive, i love it…
the pose and interaction is wonderful, it is full of feeling and sentiment. i love how they close their eyes in anticipation, it is very naturally sculpted, sculpting overall is wonderful and the meshes nice and clean, hands seem a little too small to me. and the necks, they occur in these forms, but i have not seen on so young women like you show us. but, that is nitpicking, and i only mention since you asked, 5 big stars from me. wonderful work!

Thank you all for your comments and compliments

@Doris - I was worried the hands were too small, I think you are right. I don’t completely follow on the necks - are you saying the necks would be more like on older women? I’d like to understand why that is for next time.

I think it looks great! The lighting is seems perfect and the bokeh and vignette really adds to the photo-realism. I disagree with Jools I don’t think they look like they are crying. To me the emotion is anticipation.

How much post work did you do vs. how much is Blender?

yes, swmo, i meant necks look like on women older than 40 or so. see here, there are several images of poses similar to yours, of women in varying ages. you see on women in age like yours the neck appears almost like perfect cylinder in sideview, front and back line are almost perfectly paralel, and neck is attached a tad farther back. … of course, it might well be, there are young women having neck exactely as you sculpted, the varieties in people are endless

the size of hands, you can check so (general rule of thumb): when hand is straight and placed over the face, so that the bottom of palm is in line with chin, then the fingertips almost reach the hairline. again, handsizes vary greatly in reality being outside of this rule of thumb too occasionally …

Absolutely amazing! Great to see this one finished

It seems like you spent a lot of time on this recently, I didn’t expect to see the finished project so soon. I could say many good things about almost every aspect, but I wanted to comment on the lighting in particular which is really fantastic. It’s the kind of lighting you would expect from a really good professional photographer. The highlights around the edges from the sun are great, especially the fluff on the back of the clothes! One thing that I just thought would be a nice addition was if there were just a few flyaway hairs…they would catch the light too. Anyway, great work!!

WAOOOOW MAN, that’s so GOOD !! I’d push the black a little, more (it’s sooo personal), nothing more, it’s almost perfect. For me it’s perfect, another would be more critic but I can’t say anything. Lighting is good, texturing, everything… I’m so impressed !!

@doris - thank you for the explanation

Anatomy is my weak point, but I’m trying to learn and you comments are always very helpful.

@Ewizza - It is all done in blender. The raw render isn’t hugely different - the bokeh is just from the dust particle system rather than post pro. A strong back spotlight pointing at the camera is the only lighting except for environment light, and there is strong DOF of course.

The film curve addon is set to Ektachrome100 and mixed with the original render at 40%. This makes it look more like a photograph, and also it’s a very warm, yellow profile. It’s sad this addon was removed in 2.70, because the viewport film curves can’t be mixed like this as far as I can tell. Luckily for now it still works if you copy it from the 2.69 directory.

The film grain group is mixing a grey film grain texture (using an Add mixer). This is also to try to make it look less like CG, as it adds noise across the 2D viewing plane. This is “better” noise than the normal noise you get in cycles which clusters in the shadows and only makes the CG more obvious.

@Blender Matt - Yes, a few more stray hairs would have been good!

Thank you everyone for the comments.

The film curve addon is set to Ektachrome100 and mixed with the original render at 40%. This makes it look more like a photograph, and also it’s a very warm, yellow profile. It’s sad this addon was removed in 2.70, because the viewport film curves can’t be mixed like this as far as I can tell. Luckily for now it still works if you copy it from the 2.69 directory.

Good to hear you can copy it from the 2.69 directory! If the film curves are applied in the colour management panel, and you render your image to multilayer EXR, then composite all the passes back together in post pro…are the curves applied already to the individual passes? Or will I need to copy over the film curve nodes from 2.69, set them up the same as in the colour management tab, and apply them to the composited image in order to match the viewport render?

I’m not sure - I haven’t really experimented with the new colour management and render passes. I just went looking for the addon when I found I couldn’t set the influence of it (eg to 40% mix with original render). I’ll stick with the addon for now - seems to give you way more flexibility.

and there’s two of them!

Only crits would be that the individual hair strands seem very thick, is it particles? If so, perhaps halving the thickness and doubling the amount would do the trick - although it does seem like the hair is bunching together a bit as well, too many children particles and not enough parents? Other than that, I think the ears are lacking some colouration, but that’s just a nitpick.

The ring is a really nice touch