I’ve been trying to figure out the sunbeam node, and one thing in particular confuses me.

In the image, for the right-hand window, the house outside is contributing to the effect and casting a shadow…?? I suppose the answer is to just render the outside environment on a separate layer.

But I’m wondering if this kind of thing is expected behavior? And if you’re wondering, there isn’t anything else out of site which is contributing to the shadowing/sunbeam effect.

I JUST noticed something else. It seems as if the sunbeam bleeds through other areas. It’s hard to see, but it’s happening in the lower right side (you can see the seat cushion being affected).

Is there a good way to control the sunbeam node, or an alternative? 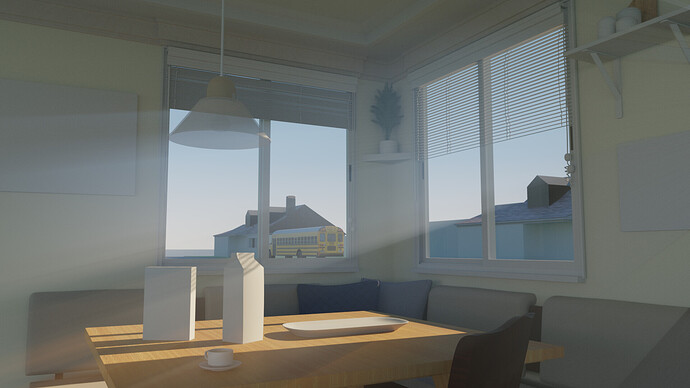 For that to work properly you need to use a CROP node to select the area you want to contribute to the effect, otherwise the filter will be applied on the whole image.

Thanks for the tip! I learned a new node, so thank you:)

Hmmm, although, it doesn’t seem to do what I need. I do actually want the whole interior to be affected - with the exception of light bleeding through the walls, and the outside house causing a weird shadow.

I feel the solution is going to be a combination of masking and render layers.

Actually, the crop node will only cut the areas that contribute to the light effect, but the rays casted by that area will affect the whole scene. The shadow from outside is a result of the wrong position of the effect origin point.

You will not be able to completely get rid of the shadows from the houses outside. You can change the angle of the sun beams to make them look like they are casting the light on the table. 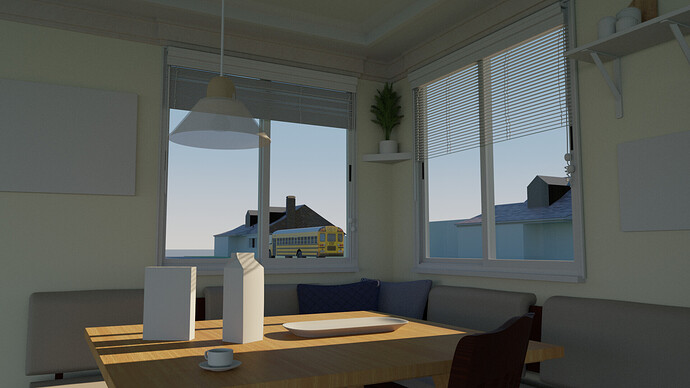 I am not sure if there is a perfect solution for the case of your image, but I divided your window in 3 different crop areas and for each area I used a different sun beams node with different origin points to be able to cover all the area the light was supposed to cover on the room. Its not perfect, but the shadow is not so visible anymore, I believe. 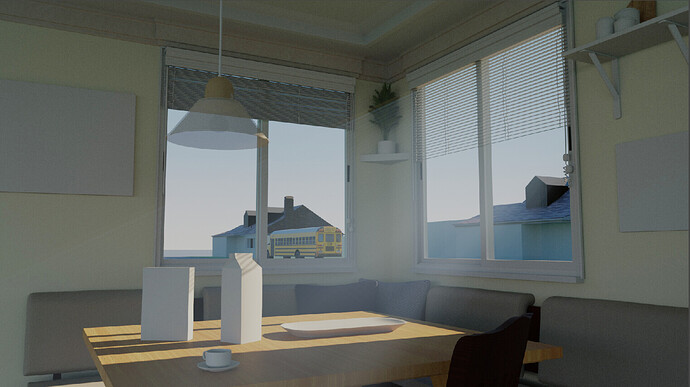 Awesome! This is pretty much what I was intending to do. Would you mind sharing your setup?

I don’t mind at all

I think the file did not go the first time.

Now I see what you did. That makes sense. I just wasn’t using the node correctly.