Sunset at the beach

its a little speedy project over easter, so I spend only 3 days
So I just tried to build an idea that I had as fast as I can 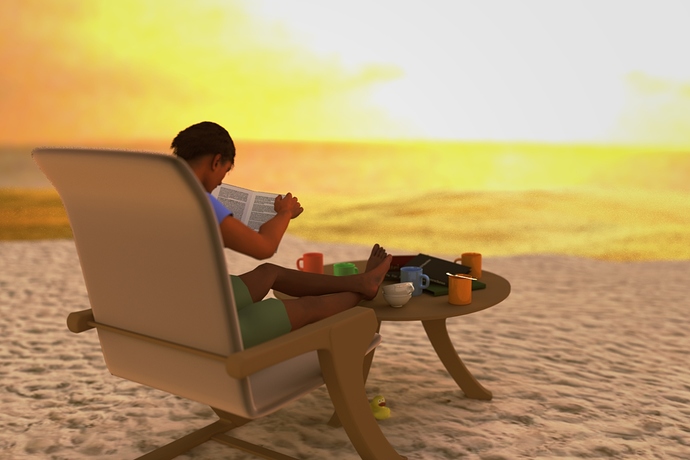 Nice, the lighting seems a bit off thou. The Sun light is extremely strong in the image but the affected objects ain’t lighted that much.
However as a finished image I think it looks great.
How did you make the sand btw? It looks awesome

I think that you should put a color gradient running two-o’clock to eight-o’clock across that beach, and add a shadow-spot to create a clear sense of low directional light. Consider the approach of creating a couple of new renders (using BI) to prepare just those elements, properly masked by the chair in the scene and, in the case of the light-on-sand, also modified by the sand-texture taken to high contrast and used as a bump-map or simply as an alpha-map. Composite these into what you’ve already prepared. In this way, you’ll avoid compromising the exposure of the person and his chair, which is basically quite good, and also largely avoid (re-)render time.

The reason why I suggest a shadow-only spot is that … well … shadows are the only thing that you really want to change here; not the light. Likewise, to give the sense of a sun-direction, it’s mostly the color of the illumination, and specifically upon the sand, that you want to gain the ability to “fine tune.”

You might also want to make a blend strictly of the ocean, and perhaps add a gradient effect to that, and give it a strong blue/green, so that once again you can mix it into the yellow tones that are predominant here, applying compositing filters creatively so that you wind up with a stronger sense of that yellow blaze being “on top of” and “in addition to” the color of the sea.

You’ll be doing work “in post,” as they say, sitting at a digital mixing-board (the final compositing “noodle”), tweaking the shot little by little … and doing it all now in two dimensions which means, “very fast and precise.” Just like they do when “mixing down” a musical recording in a studio. “The finished shot,” in other words, doesn’t pop out of the renderer … “presto!” … no, instead, the pieces did. (And you’ll be amazed just how much you can do to the original material in that digital darkroom.)

You can do this because: the original exposure that matters most (the character and his chair) is good as it stands right now, and the rest can be very easily separated-out for tweaking.