I’ve been using Blender for a while now mostly for it’s quick and easy modeling but never really got into the rendering side of things.
I have a scene with multiple objects and I would like to render a final image with lighting, shadows, etc. combined and one pass where I only have different flat colors for each mesh so I can use these flat colored meshes to quickly generate masks with the wand tool in Photoshop if I need to. In Modo e.g. I can just add a new render pass called “surface id” and it is giving me exactly that. Is there a similar thing inside blender?
It would be great if someone could help me out 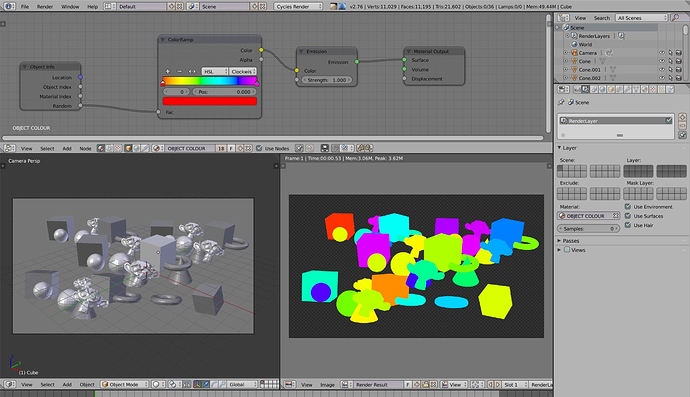 Richard, you are my hero!

Thank you so much! Btw. is there somewhere an in depth manual/tutorial for absolute blender-render-newbies? I really have a hard time understanding the logic behind the system and getting a grasp of the possibilities. There are some tutorials on youtube about the passes and stuff, but questions like these arn’t answered there. And the manual just gives explanation for the different terms and not really putting them into actual context or using examples.

At first glance, the blender render system seems way more complicated than e.g. in Modo, but I guess it also gives much more freedom and endless possibilities?