The remains of a 7th century Anglo-Saxon ship were found at Sutton Hoo, England in 1939. It was 27m long, 4.4m beam with 40 oars and probably had a square sail.

Detailed archaeological drawings were manipulated in GIMP and used for background images in orthogonal Blender windows.

‘The Earliest Ships’ - published by Conway
Easy read about Vikings ships for related knowledge - http://www.hurstwic.org/history/articles/manufacturing/text/norse_ships.htm
Detailed Viking ship models and methods of construction; more advanced than Anglo Saxon - http://www.hurstwic.org/history/articles/manufacturing/text/norse_ships.htm
Lots of reconstructed Viking ships - http://www.vikingtoday.com/ships/denmark/index.htm
Plank on frame ship modelling - http://www.modelshipworld.com/phpBB2/hptintro.php
Just images of Sutton Hoo ship archaeological dig; if you haven’t already tried this use Google Images to get straight at the visuals
Archaelogical drawing (probably taken from a book); had to be cleaned up in GIMP before use - http://images.google.com/imgres?imgurl=http://employees.oneonta.edu/farberas/arth/Images/109images/Insular/Sutton_hoo/ship_plan.jpg&imgrefurl=http://employees.oneonta.edu/farberas/arth/ARTH212/sutton_hoo.html&usg=__DhiX5Dqgu7do5KYYoC8QUPNR_Tc=&h=478&w=1500&sz=178&hl=en&start=71&tbnid=UPqS47P3orfSWM:&tbnh=48&tbnw=150&prev=/images%3Fq%3Dsutton%2Bhoo%2Bship%26ndsp%3D21%26hl%3Den%26sa%3DN%26start%3D63
One example of the Skuldelev ships to get ideas of construction - http://www2.rgzm.de/navis/home/..\ships\ship002\Ship002Engl.htm
Also many photos of Viking shipbuilding from Google Images 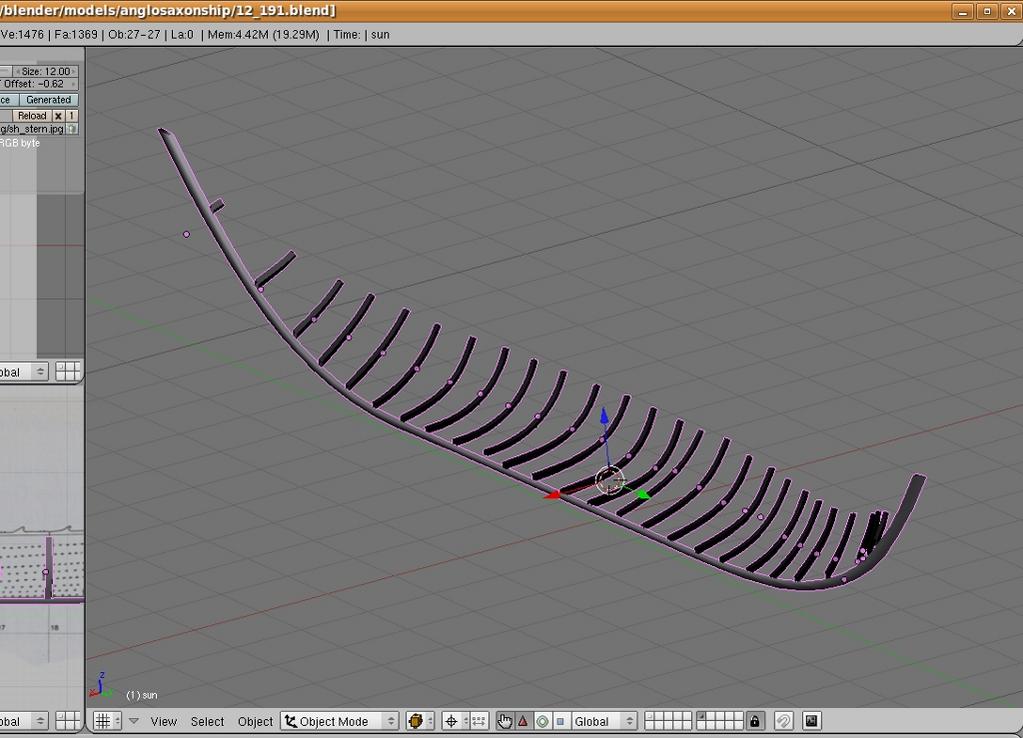 this is not equal to a WIP BGE thread.

Is this a joke?

I think it’s just a case of the wrong forum…

And this is the remains of the “Bluebird 1432 Boat”

It isn’t much… but it’s an old ship!!! This is the last fraction of the piece of wood left on the bottom of the failure ocean.

Not trying to be mean, but if that’s supposed to be the remains of a ship, it’s crap.

Killer, you’re a moron. It’s obviously a WIP in the wrong forum. Grow up, show some respect for other’s work, and give helpful criticism

Alls I see is a rib cage…

Have you considered the fact that this thread is in the WIP forum, and most likely is just a start?

Six frames were incorrect because they were duplicates of neighbours and badly rescaled. Details of the frames were missing from the archaeological drawing and so this was corrected by taking their widths from the plan view and drawing the relevant profiles using Inkscape. The modified end elevation drawings were then used to create the correct frames profiles. All but two frames were capped with trimmed half round sections. Two frames will be modified after mirroring to take the steering board (starboard). Although accuracy is important it is recognized that these ships were built over a thousand years ago from variable natural materials using hand tools - so slight defects will be introduced into the model. In that period, for example, ships’ planks were made by splitting tree trunks and not by sawing and were actually stronger than modern sawn planks. 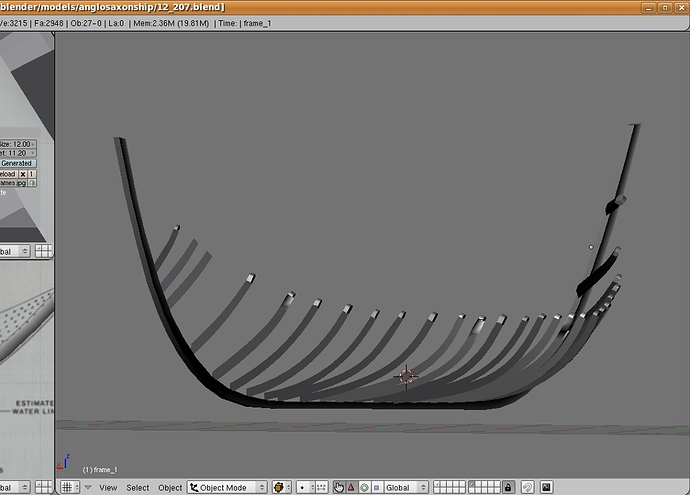 If you want feedback, post the references, most of us aren’t going to do our own research to figure out what you’re making.

Probably the most difficult part of the modelling is well underway. The join lines of the hull planking were described by 2D Bezier curves in orthogonal plan view, converted to polys, subdivided three times then manipulated by proportional grab in 16 or so steps per line in orthogonal side view. Each line was checked and re-checked to obtain gentle curves seen from all elevations. Approximately 12 hours effort so far.

I still regard myself as a newbie and I seem to encounter problems at each stage - but my questions are always answered by searching these forums. Thanks for looking. 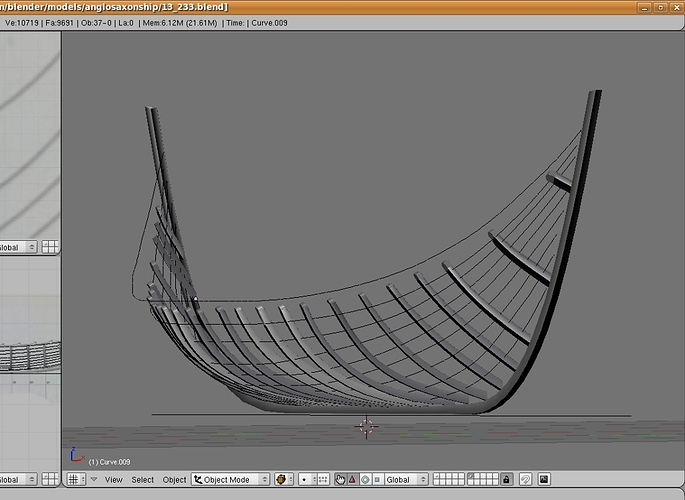 Planking is currently being modelled and the clinker hull appearance is beginning to show. The planks may be simple rectangles in section but are quite complex shapes when opened out - so they would be difficult to Curve, MeshDeform or Lattice from flat objects. Each initial plank joint is being duplicated twice then skinned to create the edges of two planks with slight overlap. Planking is being carried out from keel up - as was done by the Anglo Saxons. Closure of plank ends needs yet to be done and many profile adjustments will have to be made. Frames and planking also need bedding in properly together - it must have been like this on the real thing. Already slight defects in the “hand crafting” of this ship are evident.

Modelling of a suitable sea has started and help requested in our Textures and Lighting Forum for ideas on photorealistic waves. 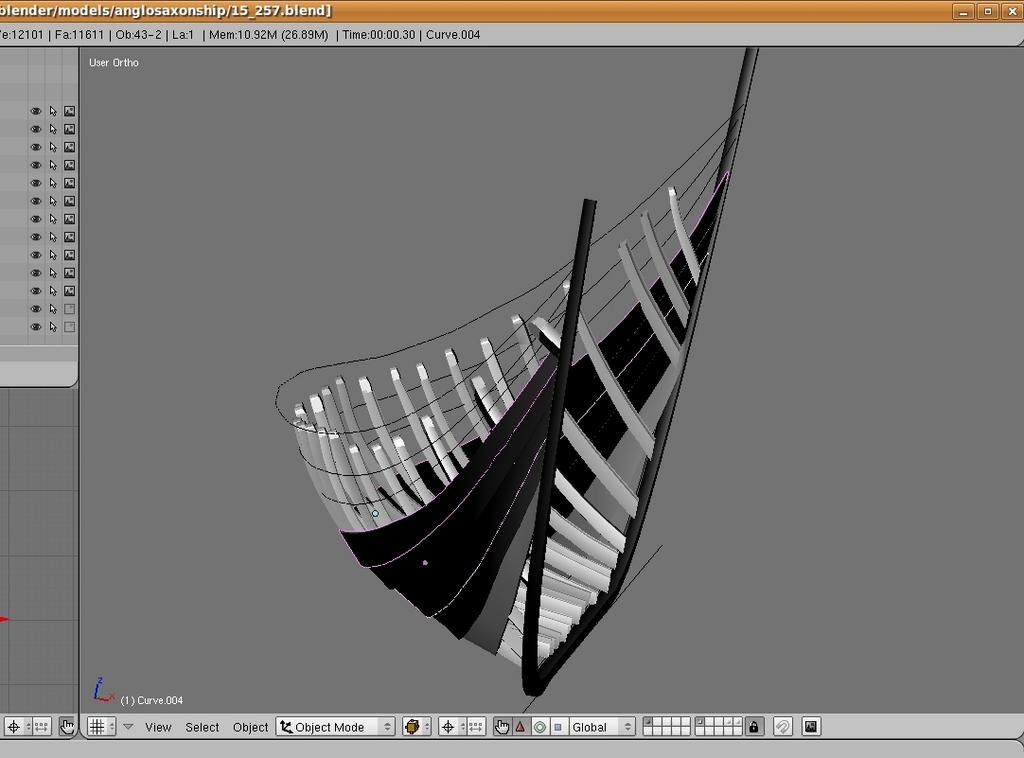 Could you post the refs? A lot of us never saw the Sutton Hoo remains, or any of the reconstruction graphics. I know you can just google it, but its nice to see where you want to go at the top of how you got there.

References added in #1 as requested.

Planking almost completed. Quite a bit of close up vertex manipulation was needed to fit them together. For authenticity, they were bevelled like the frames. Even so, I was somewhat reluctant to do this because of the 25% increase in number of vertices but its the small details that make the difference. Most of the current effort is spent in orientating the model and studying for defects.

Test render using LuxRender, 13 minutes to obtain a basic level of quality of 500 samples/pixel. Four planks were moved to one side to show what complex shapes they are - as said before it would have been very difficult to start with rectangular objects. 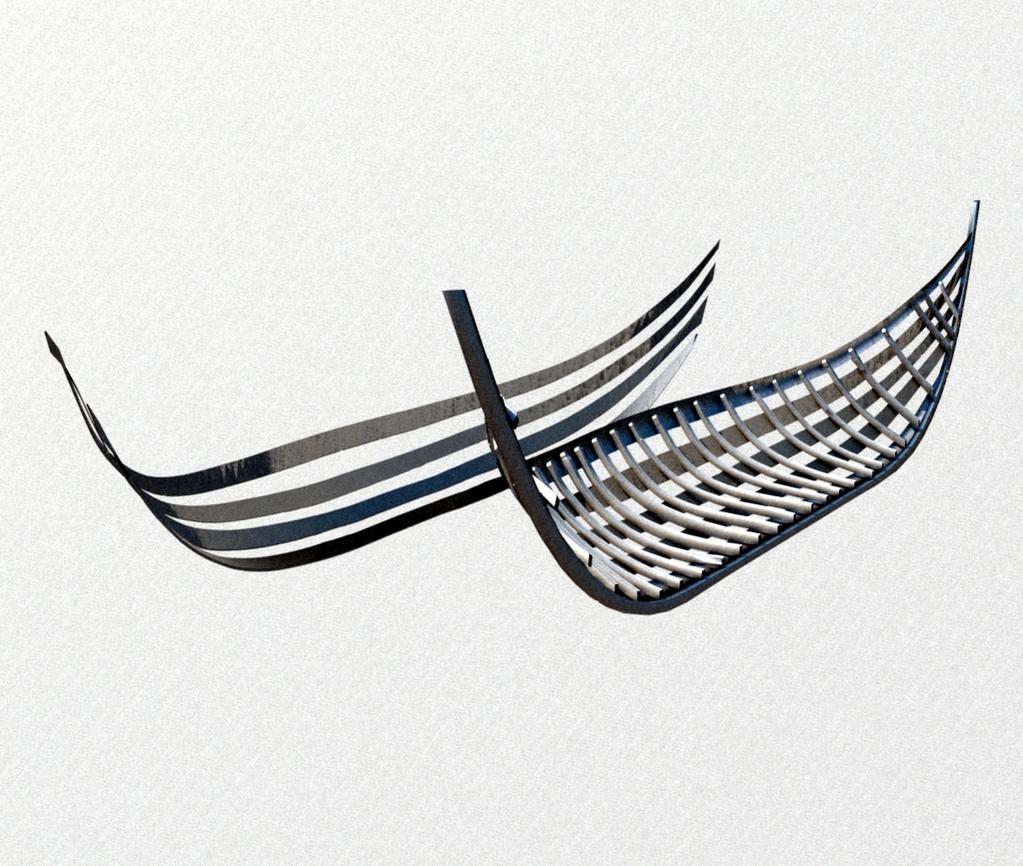 Hull planking adjusted a little, there were a few areas where just caulking would not stop the leaks. Probably will still have to dig into the vertices and make further changes as they come to light. The original rowlocks were cut from branch forks of trees and therefore were very strong. The profiles were taken from a side elevation then extruded. The rowlocks meshes looked clumsy and not at all tidy; but I don’t know any better. Starboard side of hull was mesh joined to make it easier to duplicate, mirror and assemble. Some separating of meshes is required (edit/selectvert/Link/seParate) from time to time to adjust locations of objects.

It is not certain whether a mast was employed but, for the romance of it, one was added. At the time - and even in later centuries - all masting and rigging dimensions were carried out according to rules (you didn’t need a drawing to rig a ship). The mast was supposed to be able to be unstepped from its crone (keelson) and lowered into the stern. In our case, the length of the mast was taken from an historian’s thesis. Mast was made from a capped cylinder and tapered with a Lattice and trimmed a the top (Ctrl-R/Size). The spar was made in a similar way and is equal to mast length.

Quick LuxRender to see how things are going.

Fitting the interior probably changed many times and a lot of guesswork will be needed here. Should be fun. 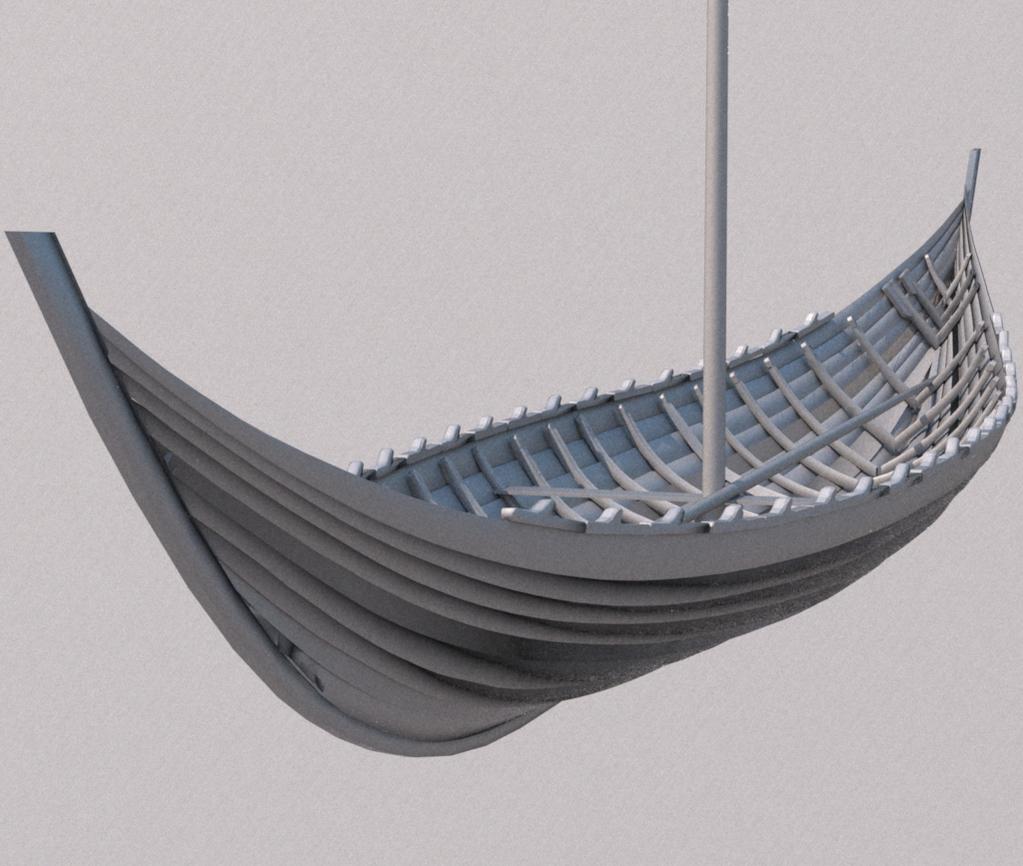 It was thought that many parts of the hull needed, or may need, further adjustment so the model was taken back to the stage where there was only the starboard half. The port half was created slightly differently this time: selected all, duplicated, joined meshes then mirrored. (The previous time the starboard half was mesh joined before duplicating - thus losing ability to correct component objects on the starboard half). After careful alignment the port half was laboriously separated into objects once again for easier manipulation later. All port objects were renamed. Decking beams were easily added and some deck planking added; they were simple cube derivatives and were all bevelled to give a more lifelike appearance.

Materials and textures are now being added. Initially, procedural textures were copied from tutorials but were rejected in favour of texture and bump maps. The materials and texturing process is nowhere near complete because of inexperience in this subject - especially dealing with uv maps. 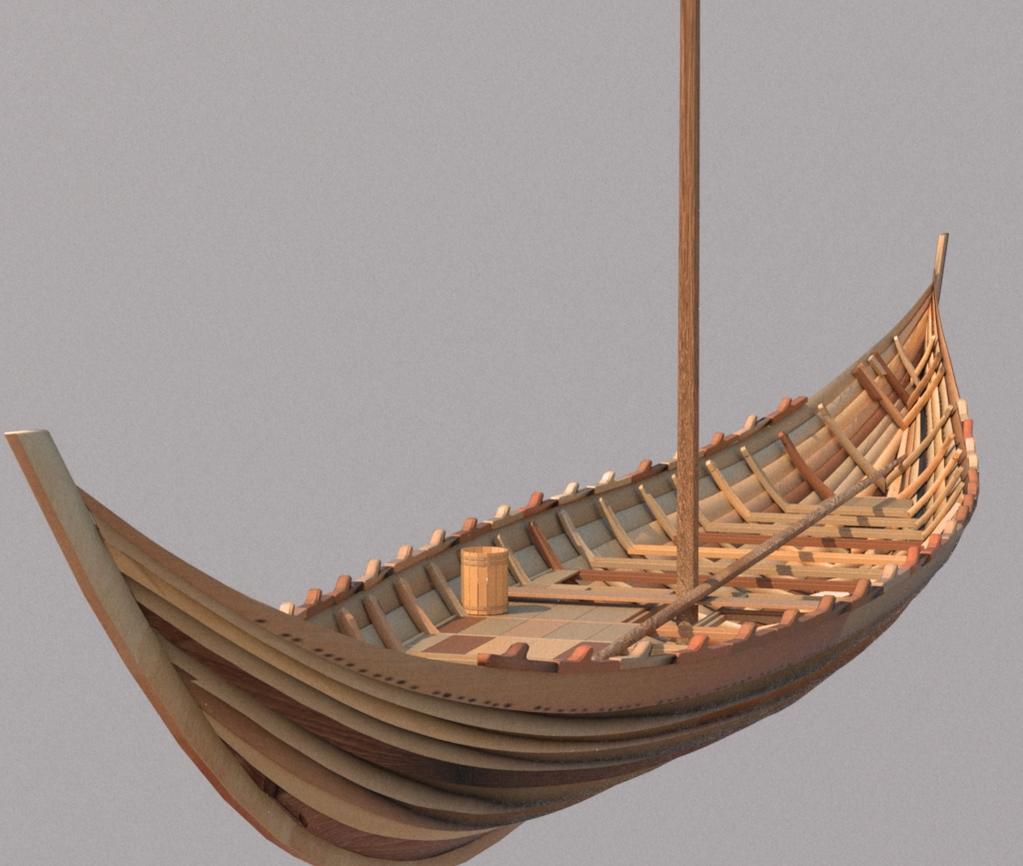 UV mapping caused difficulty for some time mainly because it wasn’t obvious that two of the hull planks were reversed relative to the others. Fine adjustments are still being made to the hull planking, frames and other fittings to bond them closer together.

Standing rigging was added to stabilize the mast, the backstay may not have been present but was added to improve looks. The two light ropes - running rigging - need slight bending to avoid a “guitar string” tautness. Nearly all rigging on ships has some curvature because of gravity, its probably best to exaggerate it rather than omit it. Details of rigging on these ships is unknown and so a variation of Viking techniques is being carried out. Coiling and knotting of ropes is being practiced at present.

Materials are a combination of image mapping and LuxRender procedural mapping. The overall appearance is too clean and polished and some attempt at randomizing surfaces and hue will be made. Undecided whether to add a sea and sail because the rendered image would also need figures for realism.

LuxRender 0.6 RC6 of 30 minutes for 500 samples/pixel to give a reasonable image. 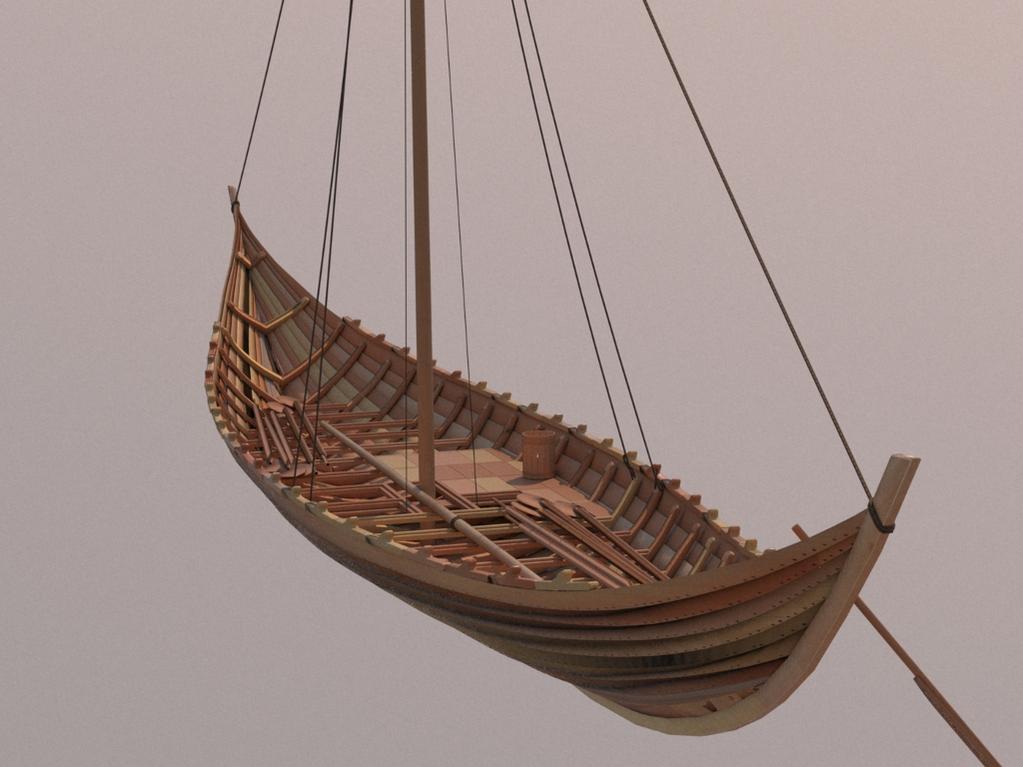 More effort on uv and bump maps. Frames and planks still being tweaked.

Various seas tried; the current one was based on an aerial photo and processed to give a basic bump map then procedural cloud textures used on top. The latest favoured method is a sculpted wave mesh that still needs more development. Final version of the ship will probably be viewed suspended against a plain background in order to clearly show its construction. 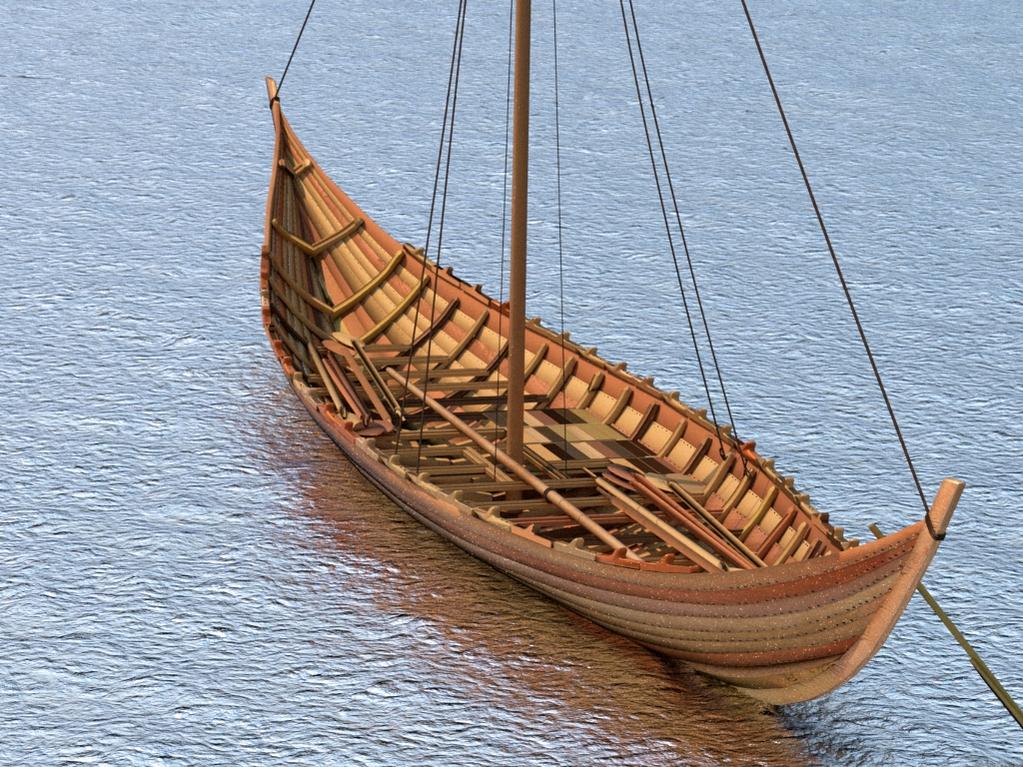 Very nice work! You have quite a realistic render there. 5.5 hours to render and you’re still getting some noise around the bottom of the boat. That’s craziness.
The wood seems almost untextured? You mentioned you’re working on the bump/normal maps, but they look like they just have a material color and no color map.

looks great! i like the fact that there’s some variation on the wood tone; a lot of times it’s all the same tone (myself included).

one crit i have (tho you said you’ll probably take it out later) is that the ocean looks way too reflective, almost to the point of being made out of silver or aluminum foil. if you’re going to keep it, i’d tone the reflection way down and give it more of the blue-grey-green color of the ocean. also you might make the surface bump map (ripples) a little bigger, or maybe add two different ones, one for the bigger waves and one for the smaller detailed waves.

one further note… i notice there’s some speckles on the … stern(?); looks like you might be using ray-traced shadows or AO. for me, i like to use the buffered shadows and the approximate AO, doesn’t give you that speckle noise. plus, it renders a LOT faster

are you going to add sails and such?