I’m going to model a car I used to have. It’s a 2004 Suzuki Wagon R+, which has also been marketed in Europe as Opel Agila. I’ve attempted modeling other cars in the past, but this is probably the first one I’m going to work on seriously and complete, hopefully. Please keep in mind that I’m a relatively beginner at 3d modeling.

At the moment I’ve completed a relatively detailed modeling cage. This is not a wireframe, there are no surfaces or polygons yet, just a faceless mesh. The advantage of doing this is that now I have a good 3d reference I can “fill” later on with polygons. Also, compared to other workflows, I essentially already almost have a complete model to toy with: 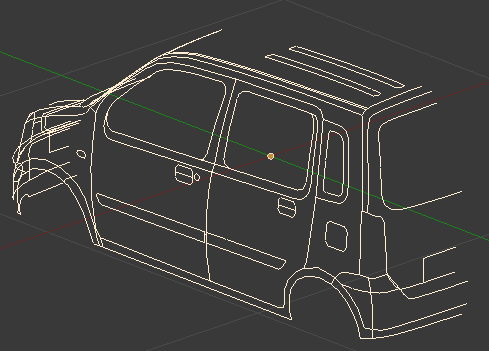 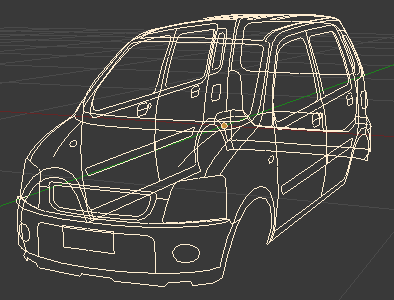 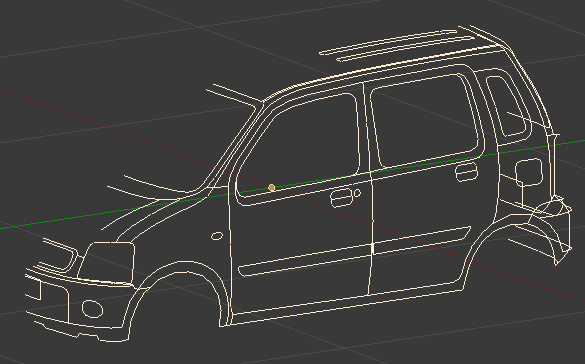 Interesting way of staring the model, would you mid posting screenshots of edit mode? I would like to see how dense your verticies are.

ive never seen anyone model a car like that, i like it though, an interesting way to start for sure

1044 vertices so far, with the mirror enabled. They haven’t been placed with regard to polygon geometry yet, but just to define edges, gaps, important bodywork details: 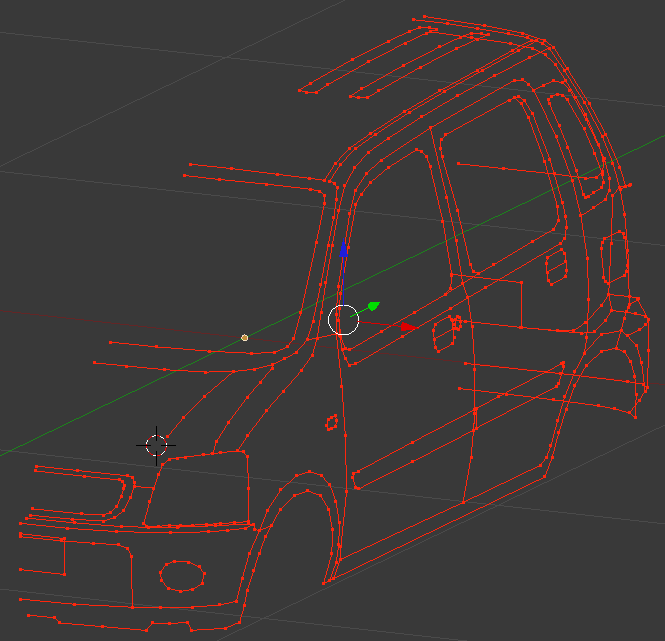 Please note that I’m using custom colors that are easier to see on blueprints. Here I have selected everything.

And a top view with everything unselected. By the way, I don’t have blueprints for the top view, this is what I’ve come up with and I think it’s relatively accurate:

Very good looking splinecage! Looks professional allready. Lets see what kind of a mesh you come up with. IMO, good splinecage is half of the work when modeling cars. Makes things alot easyer.

If you’re that clueless take it to a garage.

As expected, the actual modeling is giving me headaches. I’m not a topology expert, but I’m aware that the thing has to work seamlessly when adding Subsurf-oriented loops for creases, gaps, sharp edges, etc. I’ve not been able to find a solution especially for the subtly curved area around the grille, next to the headlights. I’m not sure if foglights have correct topology, but that appears to work so far without strange artifacts.

Also, I think that probably the mesh is excessively dense at this stage. 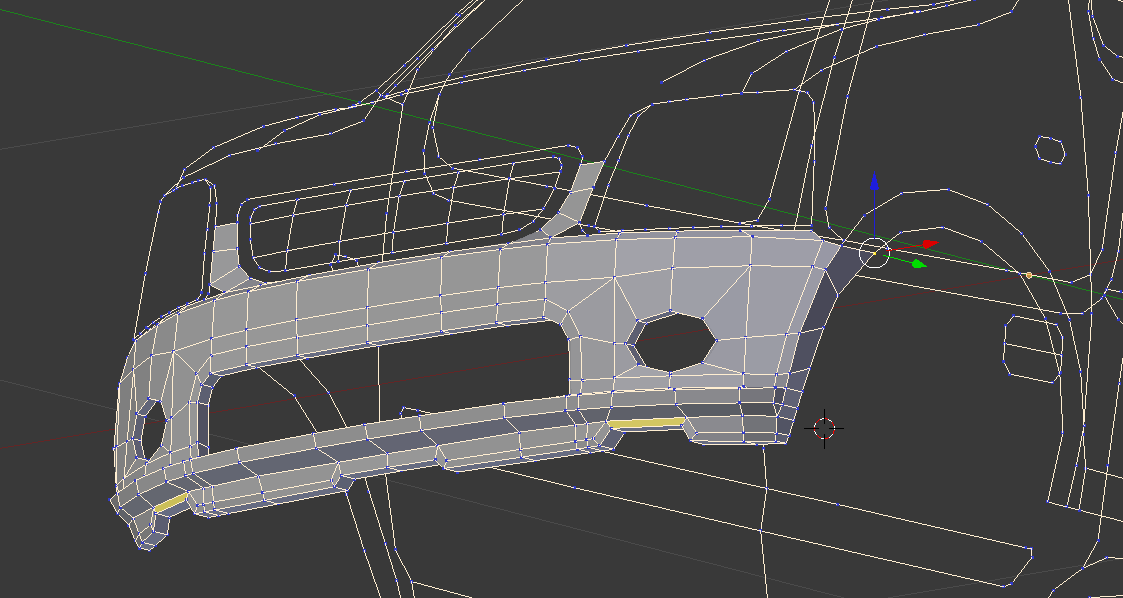 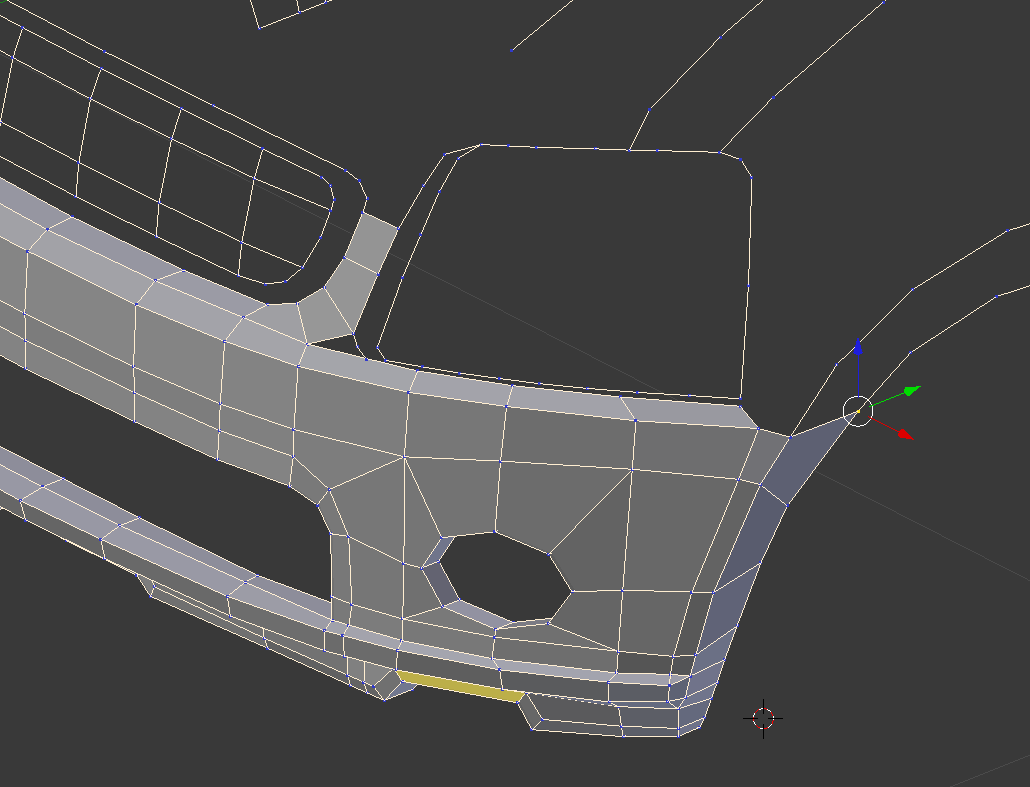 Thanks to bmesh and ngons I’ve been able to redefine the topology in certain areas multiple times without scrapping the project over each time, by the way. 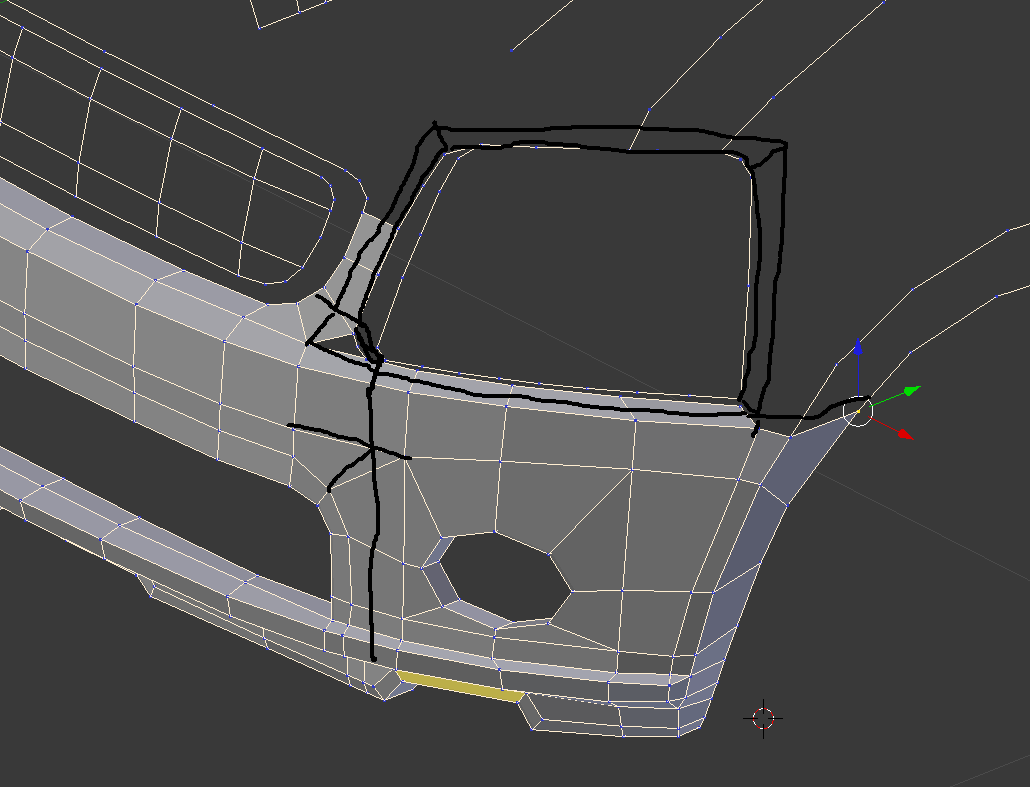 Thanks for the suggestion, I made it a bit better, although it’s slightly different from your solution: 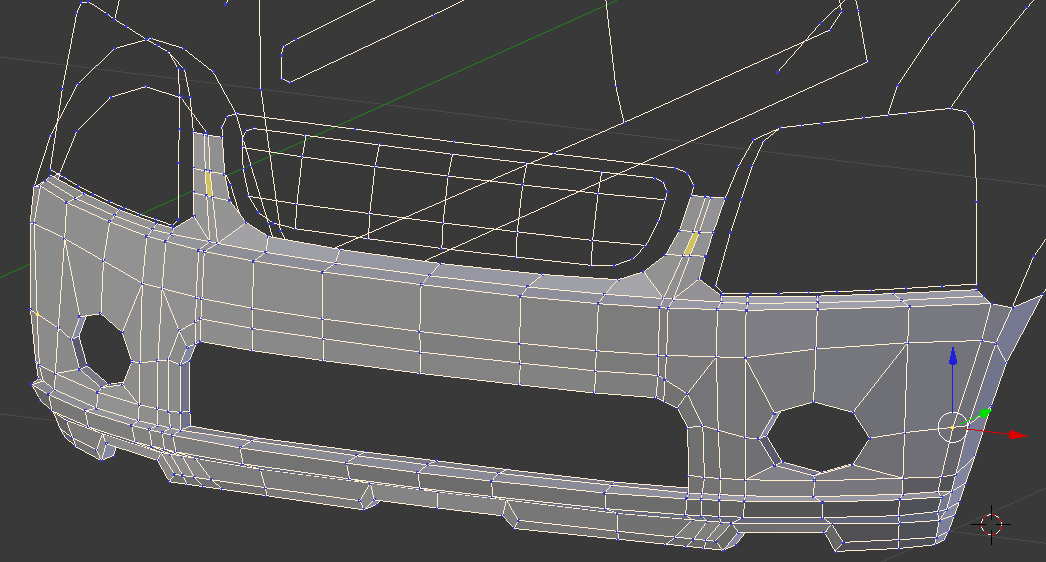 As far as I understand, it’s better to have some space between face loops, isn’t it?
I would have had an ugly 6 edge pole there, otherwise.

Bmesh, i thought that wasnt in blender untill 2.63?

ah i see, a moddified build lol, if only i could find a decent build on there, im stuck with official releases

I’m not extremely happy with the topology and how dense it is, but it appears to work as it should (when adding edge loops). Here I have applied a lv.2 Subsurf: 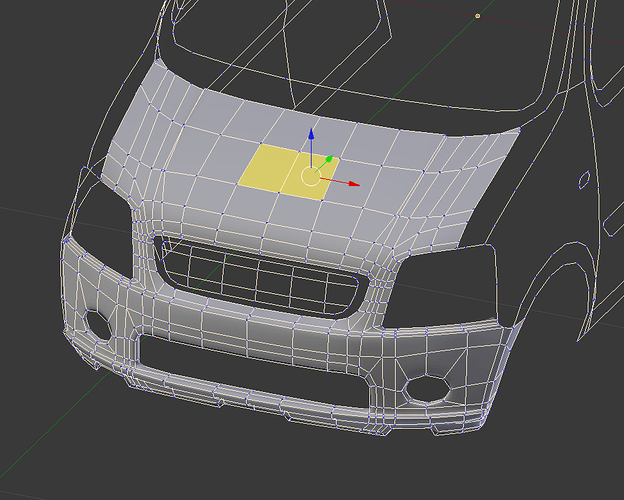 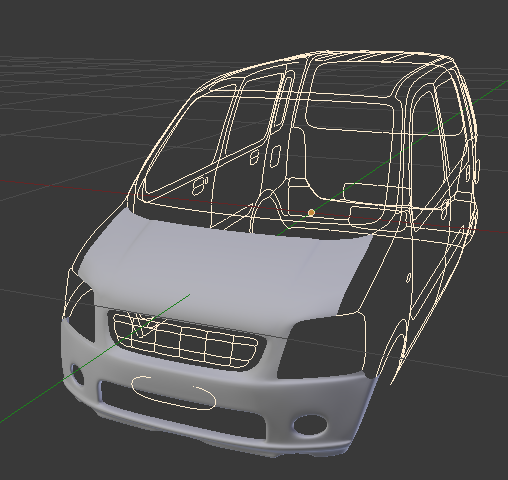 I think you’ve got the right density, your doing good, continue.

I think you’ve got the right density, your doing good, continue.

Good to know. Hopefully other body parts will be less tricky to model.

By the way, I had to change the hood topology slightly to make creases consistent with the real car (again, with the help of bmesh - when you have to mess around it’s great to not necessarily have to have quads, which of course since this is an organic subsurf model, get removed at the end of the retopologizing process): 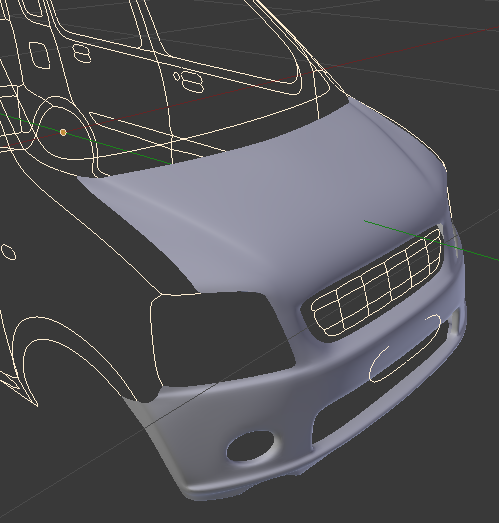 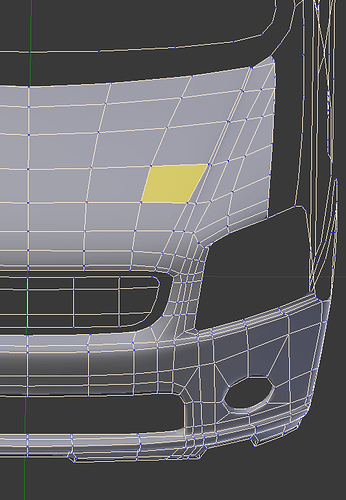 One thing I would do is to keep the “splinecage” as a separate object in another layer and then use it as a guide. That way you can keep the car mesh and cage separate.

I haven’t forgot about them. I’ve set up polygons exactly where panel gaps are, so when I will be ready, I will separate the panels apart, then make the gaps visible. I believe that by trying to model the car as much as possible in a single piece, the resulting mesh will have a better, more consistent topology. This is just my opinion, however.

One thing I would do is to keep the “splinecage” as a separate object in another layer and then use it as a guide. That way you can keep the car mesh and cage

It’s true that I’m working directly on the spline cage, however that is just a copy. I duplicated and hid the spline cage before editing it, in case something catastrophic happens or I want to start the mesh building process from scratch.

I’ve set up polygons exactly where panel gaps are, so when I will be ready, I will separate the panels apart, then make the gaps visible. I believe that by trying to model the car as much as possible in a single piece, the resulting mesh will have a better, more consistent topology.

Yeah that is what I do actually, and I think it works quite well, however, I don’t necessarily make the gaps at the end as some parts need topology work and its better if they don’t affect what you have already done.

I have to give b-mesh a try someday, seems like its easier to get the initial shapes with n-gons.