I know SyFy’s not too popular for their branding change, but they still make some cool & creative between-program bumpers. Here’s my attempt at one: http://vimeo.com/12142748 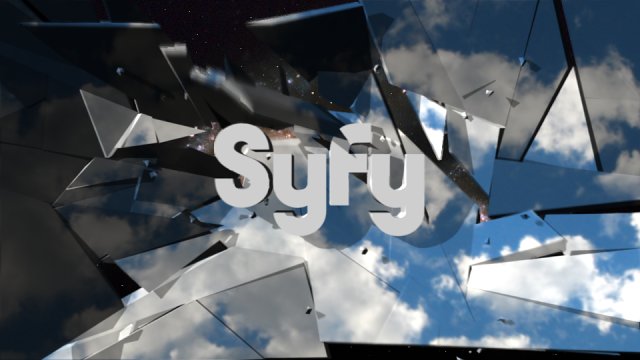 decent, but the mirror is way too thick.

I liked it, but the shadow at the beginning kind of ruined the effect. I would have set the logo to not cast shadows.

I get the feeling the shadow’s not a particularly popular feature, even though it’s in the original ads (albeit in an ambient-occluded way). And I actually hadn’t intended to suggest shattering a mirror, but that seems to be the interpretation.

Is it back to the drawing board with this? Or maybe the junkpile? Given that this thing’s drawn 100+ hits on Vimeo in three days – which is positively viral as far as I’m concerned – I can’t seem to generate much commentary one way or another.

108 on vimeo is actually quite impressive! I like it and it wouldn’t be too difficult to re-render it without shadow or with ambient occlusion

When I first started this project (was it only six days ago?), I tried some test renders with AO and wasn’t overly impressed with the results. I found that tweaking emit values and shadow sampling gave equivalent results with sending render times through the roof. And the shadows… well, the jury’s still out on that.

One thing I was tagged on (in a different web forum) was that I used ‘Win’ mapping for the animated texture of the shards, which I suppose is why some see the plane as a shattered mirror. I’ve considered changing that so each piece’s texture move & rotates independent of all the others; the only way I can see doing that is to copy the materal to each shard, then object-map the texture to a child empty. That’s a tall order, considering there’s about eighty shards…

At this point, I should either move this project to a work-in-progress forum & continue tweaking, or focus on something else (maybe another SyFy bumper).