Two objects moves along the path. But one of them moves by Constraint (Follow Path) and second by Curve Modifier. They moves with different speed. How can I synchronize the speed?

For follow path, the world speed depends on the length of the curve, which isn’t trivial to figure out (and to my knowledge, there are no built-in tools to do so.) Maybe somebody else will chime in on that front and I’ll learn something.

But the only real advantage to using one over the other is this difference in how they get evaluated-- world distance vs distance as a ratio of curve length.

So in your case, I’d say, choose one or the other. Probably the curve modifier, because maybe you want curve deformation for one object.

So how do you follow a curve modifier with something that you don’t want to deform, that maybe can’t be given a curve modifier? You create a non-rendering string of verts, with each vert assigned an individual vertex group, and give that string a verts of curve modifier. Then, instead of using a follow path, you use a copy location/damped track/locked track to acquire curve-deformed orientation. 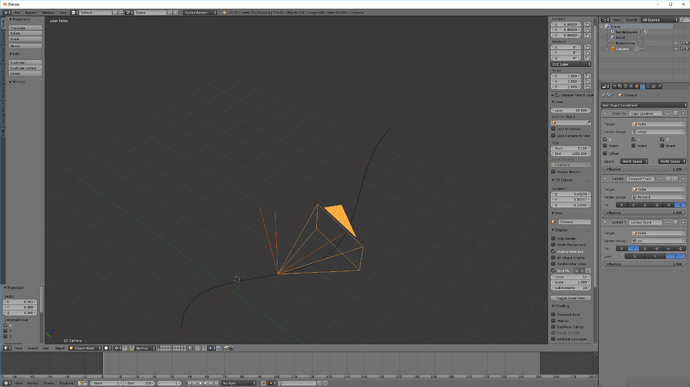 Thank you, but it is too difficult. I will do a stupid, but simple way - frame by frame.