i have a model i am working on which i have imported form another file type. the key issue i am having is badly shading geometry due largely to T vertices(i think that is the right term for where you have a vertex with a line going into it and two other lines going in at 90 degrees to the original.), is there anything in blender that will automatically find all suhc points on my mesh, perhaps then splitting the faces they affect with extra lines so as to cure the issue. i would like to know where they all are before fixing them but the model is pretty high poly so i cannot search over the whole mesh very easily.
thanks

No idea what you actual mesh looks like but if you are looking for vertices connected to just 3 edges you can select one and use Shift+G to select all those vertices with the same number of connected edges.

the problem is this sort of thing 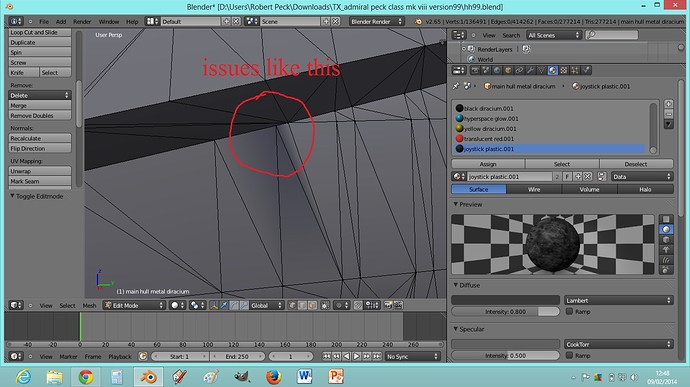 …Another software you got model out - (my bet - Sketchup) - can you tell it not to subdivide quads on export? If not, there are some tools to deal with this in blender but it is not a magic wand. Expect a lot of manual work, however i’m curious from where comes 30 Mb. 140000 verts can’t be file so large.

Edit mode solid view, hide some face selection and see what’s left inside, delete. Repeat.
Select logical section of triangles, F to form quads/ngons. Alt-J on selection of faces to convert. Cut again where needed. Repeat.
Look what Limited Dissolve in Delete menu can.
Use imported model as a form for some retopo work.

Or look into renderers for that other software and stay within it.

For any users wiht the same issue eventually coming across this post: i solved it, here is how.

I used edge split in edit mode on lines near the problem t-vertices. The trick is to select ( in face mode) the face on which the worst black (or sometimes white)triangle shading has occured, then to go into edge mode and deslect the edges of it that are far away ffrom the problem corner. Then to use “Mesh—>Edges—>Edge Split” to split the problem edges around the dodgy vertex. And repeat this for any other t vertices. It also helps to try and design the model in the original software (good guess eppo, it was sketchup) to avoid having t vertices but this still can’t stop all of them. Where surfaces are cuved edge split should be used carefully so that the edges at which curving occurs are NOT split, but edges going across the faces which make up the curve, or edges which make up the ends of a cylinder for example can be safely split. Splitting the edges round the circles at the ends of a cylinder by the way is a really good trick to make the cylindr render better on an all tris mesh. You have to find these dodgy points whwre splitting is needed by looking around in object mode for things that don’t shade right when you move around them and making a few quick renders to see where issues are.

…Another software you got model out - (my bet - Sketchup) - can you tell it not to subdivide quads on export?

ha ha, possibly sketchup.
SUp can export obj (a free plugin by Tig is the best). It will split all quads and ngons to tris though.
However, SUp can export DAE format. This will support quads and ngons. There is an issue though. Blender can’t support n-gons with a hole in the middle, meaning: such meshes will brake and some elements won’t import. It takes a few minutes in SUp to fix this issue before exporting.
The problem with the majority of SUp users is, you can easier rebuild the whole model in blender than trying to import it.