Awesome!!!
How did you achieve those nice looking clouds and that fog in the desert?

Well a long time ago lol, if you scroll back to the top of the thread you will see the true progress over time! im only going to perfect and improve and refine as i go forward as i make the Alpha Demo Build!

i was going to bed, then i had the bad idea to visit this

Well, congrats . Nice job so far.
Im not sure about the final form of this game but maybe a such big world with so large maps is a bit ambitious for an indie game running in BGE ? It will be hard to give life to such big spaces… What about orienting the game towards something like Dune 1 ? It will be a very good thing to make the a remake of Dune1 and you will bring it to a new level as you will add more features (as you shown in the video). Do you know this legendary game ? You will definively find a big audience if you make a reboot of this game so , it’s strategic, but not in real time a bit an rpg so with your engine, you will be able to let the player travel planets then i had the bad idea to visit this

i agree it was a bad idea to do.

but maybe a such big world with so large maps is a bit ambitious for an indie game running in BGE ?

It is not. it all depends on the one who creates it. You can’t handle it, who says he can’t?

It will be hard to give life to such big spaces

What about orienting the game towards something like Dune 1 ? It will be a very good thing to make the a remake of Dune1 and you will bring it to a new level as you will add more features

Why would he do that? It’s orientated towards star wars can’t you see that?

Thanks for the wonderful feedback @Cotaks , i think @blenderaptor doesn’t see the vision or what’s been done! after everything i’ve posted since the start; and whats been done so far… its just impossible to turn back on what i’ve achieved at this point!

going forward you guys will witness some of the great content i’ve been preparing since the beginning, only that now this time more refined and fully explored and showcased.

@blenderaptor if i were you buddy, id revisit the thread from the beginning and go through everything, maybe you might get the picture by now!, what you’ve suggested is like turning yr back on something you’ve worked so hard on and having sleepless nights believing that you’re putting up something great that will shine for itself some day and what yr saying is that when you’re almost there you decide to cut on all the progress, only to give up and reboot that’s a waste of time and energy/ potential…
(And seeing that this game is contributing to UPBGE in every way, its a dedicated game for the engine’s development and advancement, documentation will be created and resources will be available after release of the Public Builds/ perhaps even an entire tutorial series; its design and focus is aimed at setting the bar for future UPBGE Games so that people can use the systems and methods i used to achieve and make future Better UPBGE Games at a much bigger scope/ scale!)

!!! I COULD NEVER TURN AT THIS POINT - THIS GAME WILL FULFILL ITS PURPOSE HERE IN THIS COMMUNITY !!!

For all i know, i will work to see this game finished till the very end, until you guys play my Open Public Alpha demo and do game play reviews! im with this till the end, and you guys will witness it every step of the way!

Thanks for keeping the thread alive i appreciate it guys, more content coming up in the upcoming days so stick around.

Dude, you are just asoweme!!
Here, have a gift from me

I don’t want people to think im critizing this project whatsoever. Maybe i was not aware enough of the direction of the game and the goal pursued

@Fred_K.S , this was not asking you to turn back on all the big amount of work you did so far. Actually, i will never ask you to do anything

I was just saying that there’s some technical limitations that can be faced if you take some directions in your game you maybe never though about before. I’m not talking by experience, but by examples : i don’t know if upbge can handle huge and populated open maps, but i see few (actually i see none ) examples of bge games running large open worlds. Well, this is not a turn down. If you will be the first to do it, then

I just gave Dune1 as an example of a strategic rpg in which there’s lot of fun playing it, eventhough, there was, at that time, a lack of interactive possibilities ( like driving vehicules) . This is not turning your back on all your back, it’s about reconsidering some choices (not all of them ! ).

edit : to be exact. Keep going the direction you choose (it looks terrific good so far) but be carefull to not face the consequences of some choices when it’s really hard to go back. Like, … oh damn, when i put more than 10 animated characters on the map, the game drops to 10 fps. Im just saying to be careful without refraining your ambition to make a big game

i understand where your coming from and ive voiced similar concerns. but believe me when i say i think its feasible. im working on a world container streaming system that should load in and out large and small areas alike, with all objects preserved. its pretty ground breaking and hope to push the system to its limits.

the biggest issue is the potential lack of gpu ram garbage collection. by keeping a lid on materials and textures, and using modular technics, i think it can be pulled off. the system requirements will be pretty high though.

A game with infinite worlds ? Like never ending ! With never ending scenes like … like you create forever and finalize nothing. Do a map, finish it, improve it, update it.

the system requirements will be pretty high though.

what do you need to keep the game run at above 60fps in all cases ?

you seem to be angry Fred xP. Just saying, maybe you should try your game in BGE2.79 with all the fancy nodes/filters/shaders off. Personnaly, i always found BGE running quicker than UPBGE. But i know i miss some points with the upbge.

Just keep 1 sun (euh maybe 2 suns to make it more Sci-fi … mandatory) , 1 counter-light and see how it runs. Also, you know this, but baking cycles textures could be a nice hack

its still under heavy development and optimisations are still being considered. but i have a i7-3770 and gtx 970 that runs it good.

You know when you turn off all the lights under “Shading” and the fps go through the roof?
it is equivalent to make all materials ‘shadeless’.
the more ‘shadeless’ of the materials, the faster it gets
i do that and make my lighting/shading with
matcap textures (normal coordenates, negative division blend mode)
this way the material are shaded even tough ‘shadless’ is checked

using only one lamp for shadow(‘only shadow’ checked)
no need for hemis and extra suns
its kind of a deferred technique with foward rendering, runs fast and looks great!

You know when you turn off all the lights under “Shading” and the fps go through the roof?
it is equivalent to make all materials ‘shadeless’.
the more ‘shadeless’ of the materials, the faster it gets
i do that and make my lighting/shading with matcap(normal coordenates) textures
this way the material are shaded even tough ‘shadless’ is checked

@Murilo_Hilas This reminds me of the old BGE days when i used to be playing around with the Multi-texture Setting instead of GLSL option !!! 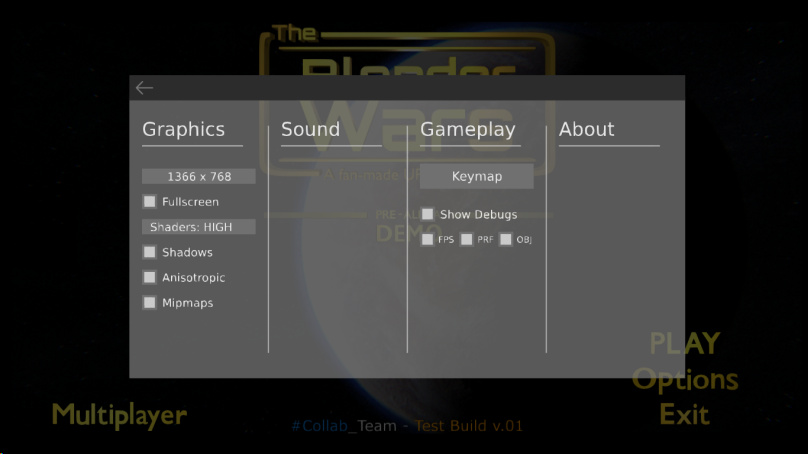 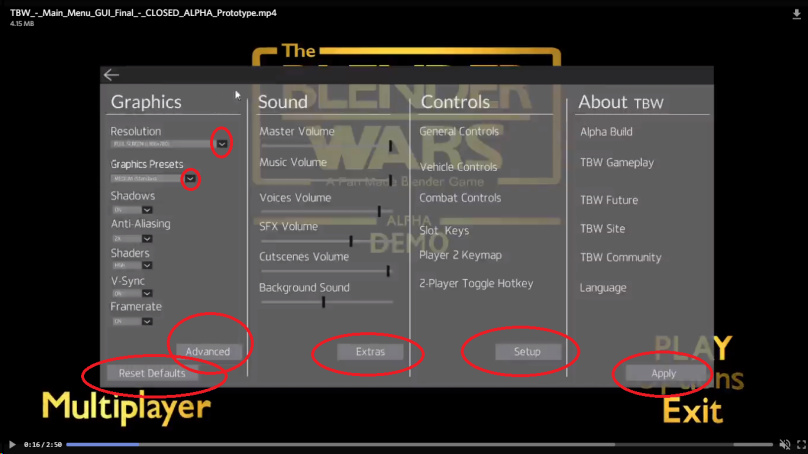 TBW currently has this option of you can set it to the lowest setting on the current Pre-Alpha build but we choose to keep atleast the lights on, lol but the game has no serious noticeable differences to the overall visual quality at all; it simply looks okay just flat consistency in lighting and shader’s are off but there is a significant boost in fps +10… 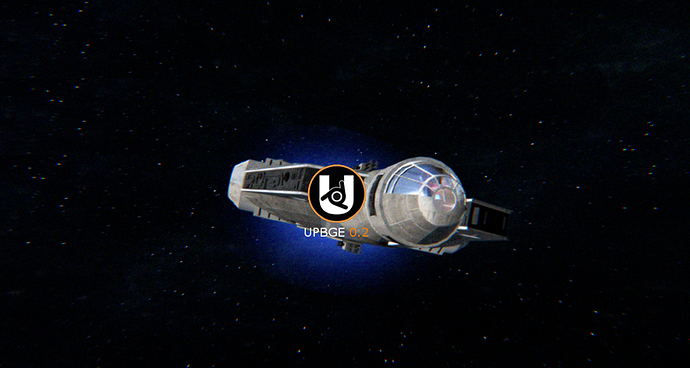 yeah, great.
multitexture techniques while in glsl i meant XD
using material lod and lamp lod systems to switch between dinamic and ‘shadeless-shaded’ materials.
that makes for a Decent Optimization

we actually have a setting in game for that. under shaders.

and theres also a shadows setting that affects medium and high. soon to be added is an antialiasing setting and a more refined anisotropic setting.

Emperor Fred is in the cabin

Apologies for the lack of content and updates in the last 3 months, ive been in abit of a PITA Situation guys … (but im back and stable again!)

Looking forward TBW has alot to offer for 2021, id stay stick around and keep watch
on the thread, since ive only returned fully to its development last week Monday i will post the latest updates more this time around.