This is one of my works, which I did in 30 minutes. I’m new to Blender so I don’t know a lot of stuff about using it. But I like the spinning tool, which is what I used mostly. I’ve had Blender on my PC for a while and I think I like the interface which took me a couple of days to learn. I’ve considered doing 3D work for a long time, or something where I’m creative with a PC. I’m not a bad drawer but I can probably put my stuff down into 3D better. Anyways here’s my render. 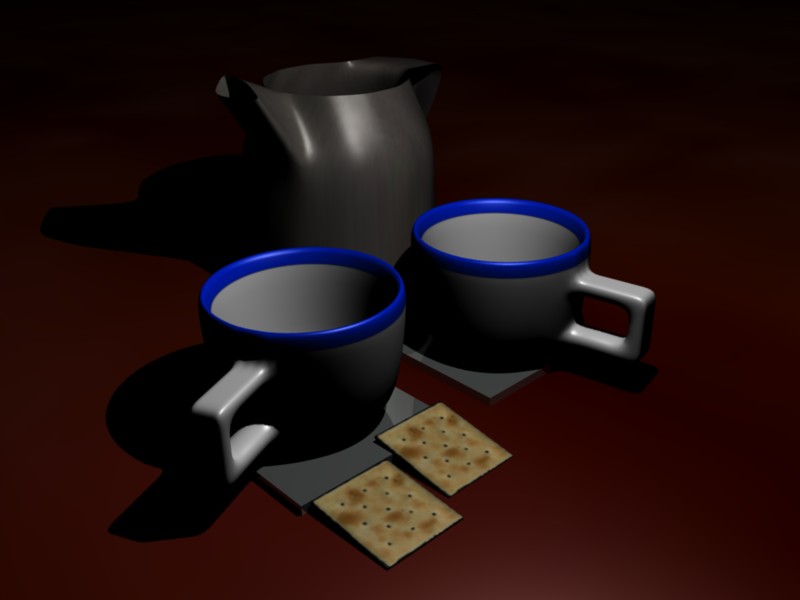 Hi friendly Bobcaticus from a friendly person at BlenderArtists…

Four little suggestions…
1- A plate for the crackers. ( crumbs can make a mess of the table

)
2- Rotate one of the crackers to a different angle.
3- Liquid in the cups/mugs ( tea or coffee your choice )
4- More light your image is a little dark.:yes:

I like it.
That’s pretty good for a first go. I prefer sweet biscuits with my tea, though.

Very nice! It’s pretty awesome for a first try. Suggestions:
Make the handles circle shaped (personal aesthetic preference)
Use soft shadows, (On the lamp, increase samples to about 6 and soft a bit (15%))

Hey again, thanks for the criticism.

I don’t know much about liquids but I did add a plane over it and made it fit in the cup. I used the materials list to make a watery sort of material, like tea. I tried the thing with the soft shadows, I think I did anyways.

I threw away the crackers (don’t know what’s on that table!) and decided to make a plate to hold the crackers. I figured that maybe I’d want butter on the crackers, so using a cheese texture* I made a small dod of butter and a knife through it. I think it turned out ok. I didn’t edit the light, but I don’t want to render it again so I’ll leave it for now.

Thanks for your help again guys. 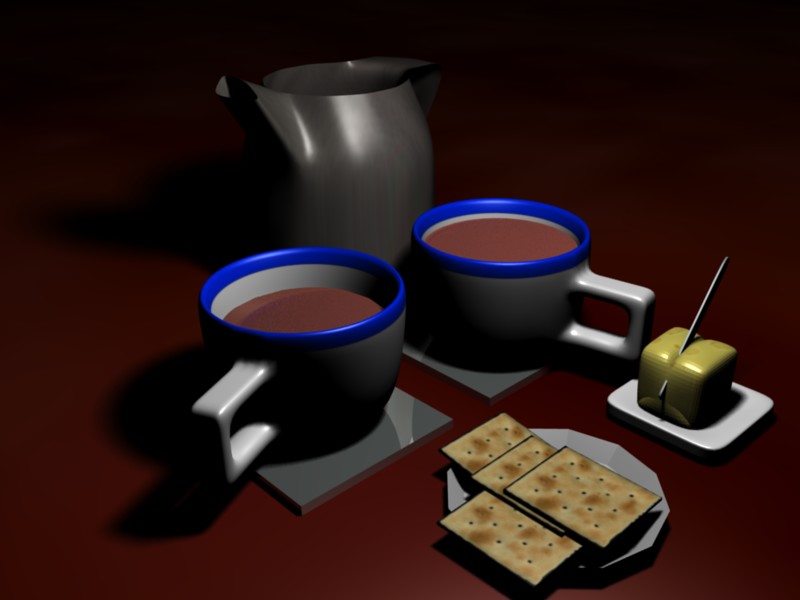 This is getting to be an awesome image. Tell me, do you spend a lot of time tea partying with old ladies drinking and listening to reminenses? jk.
In my opinion to get the image to that divine zone, the lighting should be tweaked, and maybe you can put a wallpapered background, and a table cloth too. Keep at the work dude!