Hey boys and girls,
I need some feedback or critique on my Templar project. 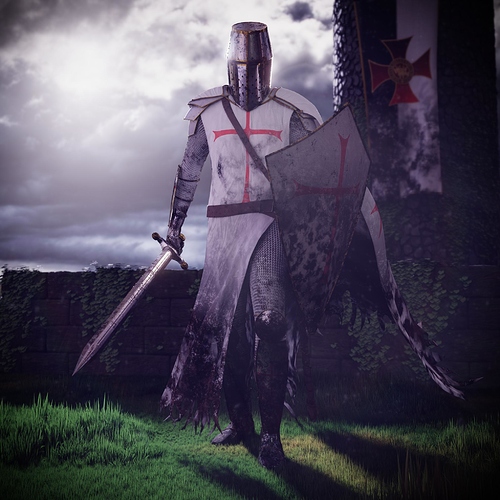 I’ve been working on it for so long that I have become blind and I’m not entirely happy with the results.
Any feedback is greatly appreciated!

Hey, good stuff! I think his surroundings may steal viewers attention a bit too much. There should be more going on on the character (more detail) and less around him.

Hey, good stuff! I think his surroundings may steal viewers attention a bit too much. There should be more going on on the character (more detail) and less around him.

Yeah. lowering the saturation on the grass would help. GL

Yes, I think the knight is awesome. What is around him doesn’t benefit him at all. Why not go for something more simple?

Overall, the concept looks great, and it’s clear you poured a lot of love into this. The issues I spot are mainly a lack of congruence between some aspects, and a few technical details.
The tower looks more like scales than stone. This could very well be due to the lighting, as it doesn’t look quite as scaly further down towards the wall. The banner looks nice, you can really feel the weight of it, but I’m not certain the grunge on it is really necessary. How would it have gotten there? Was it dragged throw war before being place there (entirely likely)? If that’s the case, there should be holes and tattering at the exposed edges. Something of that size was likely rolled or folded, so that’s where most of the grunge would be, as opposed to the bottom. Also, the size of the grunge is much too large, unless you’re implying he’s been slaying dragons near it (which, given that he’s a knight, is also entirely likely). If it’s simply supposed to imply extremely heavy wear, the colors should be faded, as well. Blood stains bleach colors out, even if you manage to remove them, and overexposure to sun, such as an outdoor banner would have, bleaches out color, as well.
The knight’s clothing is a bit too thin and silky, it should have a bit more weight to them. Simply thickening them should fix that issue, as a strong wind could easily be argued.
The rust-pitted sword, however, is bit of another story. With how lovely and clean the hilt is, the rest of it should be as well-maintained. It’s extremely likely that, while he might let everything else be put off, his main weapon would be carefully cared for, given such things were not cheap, and likely a family heirloom, since knights where usually a place for second sons to seek glory and recognition. As it looks now, once good swing would shatter that thing to pieces.
The grass is way too straight. At that length, there would be some bend under its own weight, nevermind the wind clearly whipping around through the scene, if the banner, clouds, and cape are any indication (his tunic could also reflect this more). In addition the leaves you have climbing over the wall could stand to to be rounder over all, with less leaves overlapping. Most of them would fall off if they grew like that, from lack of sun. They tend to stick out more-or-less straight out from the vine. The white shine you have, unless this is one the dark and shiny varieties you find in more wintry climes, would be yellowish or green from the translucency, with the sun shining through.
On a composition note, I think if you made the sun bluer, on the same level of saturation as the banner and grass, it would stand to frame your knight very well.

Largely I agree with the other critiques here, but bearing them in mind I think this is great. It almost has the feel of a movie poster, or at least the rough concept for one.

I think the sky is too bright compared to the knight. Maybe better lighting ON the knight so he’s the main focus.