Testing out my new tablet

I picked up an A4 Intuos 3 recently and wanted to try it out. While fiddling with it I noticed I could create an effect in Photoshop that resembled a pencil sketch. I wanted to see how it looked when used to make an actual drawing. However I was struggling to come up with an entirely original image to work with.

I had an image link that I had been meaning to use as a pose reference for a drawing but for various reasons I never got around to it. I stumbled upon it again when I was rummaging around my computer looking for stuff to use for the tablet experiment and I decided that it would be as good a photo to use as any. As the idea was to try out shading techniques with the tablet rather than create an entirely new picture I decided to shade over the original image in Photoshop.

I’m not sure I’m entirely happy with the results. I feel like the shading is not anything like as subtle in its application as it could have been if done with a real pencil. Maybe the pressure sensitivity needs tweaking to get a more accurate pencil kind of feel but I think that on the whole I’m quite pleased with the outcome.

the stock image I used was found on the gallery here. link 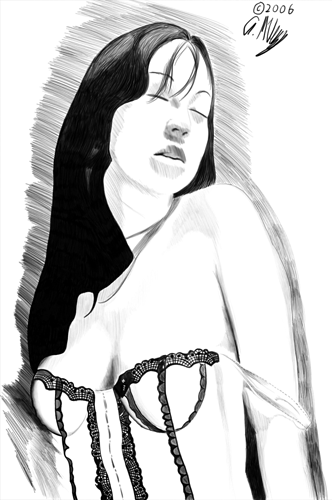 Not bad, what size tablet did you get? I’m thinking of getting an Intous too, my graphire’s resolution just doesn’t cut it…anyhow hope to see more of your tests…

Part of the loss of subtlety might be in the large black mass of hair. Pencil can’t do that value. Perhaps a thinner line and crosshatching for darker values?