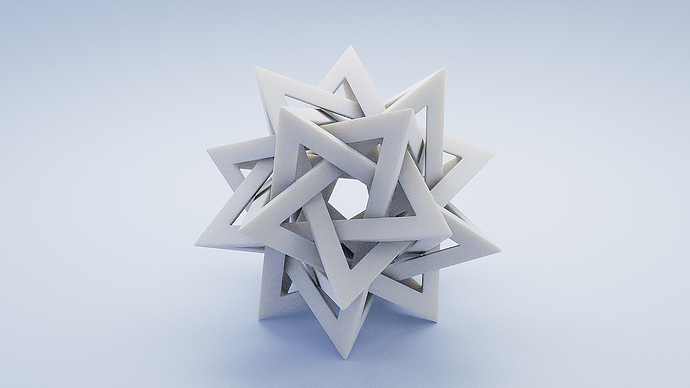 Another animation of the Tetra Star Orderly Tangle (Regular Polylink). This model is based on my latest tutorial. The simple animation was done entirely in Blender 2.8 with Eevee render engine. Overall, I used Ambient Occlusion, Screen Space reflections and SSS with three area lights to set up the “stage” lighting. Background used only the default color background. The render used only 64 samples per frame, which rendered in around 1 second per frame using a RTX 2070 GPU.

Hi! I was wondering what would be the solution to the sudden ambient occlusion jumps when occluded areas become visible (especially noticeable at the borders of the image). Maybe rendering at 125% size and then cropping that extra 25% off? I haven’t tried… Another option of course is Cycles, but it’s probably much slower (unless using the new denoiser in 2.81…)

And I like the way the material transfers light.

I’m not sure how to solve the Occlusion issues. It not only happens at the edges of the image but also the edges of objects. There is an Overscan option in the Render settings tab under “Film”, which helps with the effects being cut off at the edges of the image. I should have enabled that here, and it would have helped with the issues you observed. However, that doesn’t help the problems of AO from within the scene around objects. Using Contact Shadows might assist with that though. I’ll have to play around with settings later. The new Denoise in 2.81 is great, but there’s no way it would come anywhere near the speed of rendering with Eevee here. Denoise can still add around 8 seconds per frame to render time just for processing, so even if you had a scene where you stopped the path tracing at 8 seconds, you’d have between 4 nd 8 seconds to wait for denoising, depending on the speed of your GPU or CPU. The Eevee frames are almost instant in this case.