Texture particles as a whole rather than individually?

Hi,
I’ve been messing around trying to animate water and smoke. I know how to map a texture to a particle system, but the problem I encounter is that the texture is mapped to each individual particle rather than each particle making up one segment of the texture (I hope that makes sense). I’m trying to make the smoke or water look realistic, and I just can’t get even close to doing so when it’s obvious that theres a bunch of repetitive designs clumped together.

My true goal is to create a somewhat believable waterfall or smoke. So if you know a better way to go about this, that’s okay. I tried doing something with billboards but, they confuse me. I appreciate any help, thanks.

have you played with the smoke and fluid simulation tools yet? They would be your best bet for realistic smoke and water.

I didn’t answer your question at all! HA!

I haven’t but I do know about them. I kind of want to do it on my own though, I don’t know why, I kind of want to be able to experiment and do it myself rather than use a simulator. I looked at this tutorial: http://www.foro3d.com/f227/realistic-smoke-in-blender-77131.html which uses billboards for smoke and i like the results. Supposedly they can make good waterfalls too which is something I was striving for. I got confused with it though, and it didn’t work for me.

My initial theory was to use particles and apply a texture to them to give a smoke or water spray feel. But the problem I encountered was that each particle gets the texture and it ends up looking stupid, just a bunch of repetitive designs. If I can apply the texture to the whole system, that would be better. Although I’m open to suggestions, because my true goal is just to make believable smoke or a waterfall from scratch.

Or use projection mode for texturing. Then it is like shining a virtual slide projector on to your particles. They only get part of the texture that strikes them.

@labobo: thanks, but that didn’t seem to do anything.

@Atom: Thanks, how would I go about doing that?

Use the OB function in the MapTo tab. Basically place an Empty in front of the particles. The texture is projected along the Z-axis of the Empty. So as you move the Empty along the X,Y you can move the texture. Also you can scale the empty to scale the texture.

Okay, so I have my particle system and my empty. I picked a texture and in the map input tab, (I’m assuming that’s what you meant, because I don’t see any OB function in Map To) typed the Empty name into the object space. So it does have the texture, but I don’t see how the empty affects it. Obviously I’m doing something wrong. I still have the same problem.

Here is an example file that shows how to use the empty to project the magic texture onto the particles.

Remember, you can scale the empty to scale the texture projection.

Also, remember that projection only happens down the z-axis of the empty. So if the emitter becomes out of alignment with the projector, the texture will skew. If you plan on animating the position/rotation of the emitter you may want to make the empty the child of the emitter so it will always remain aligned. 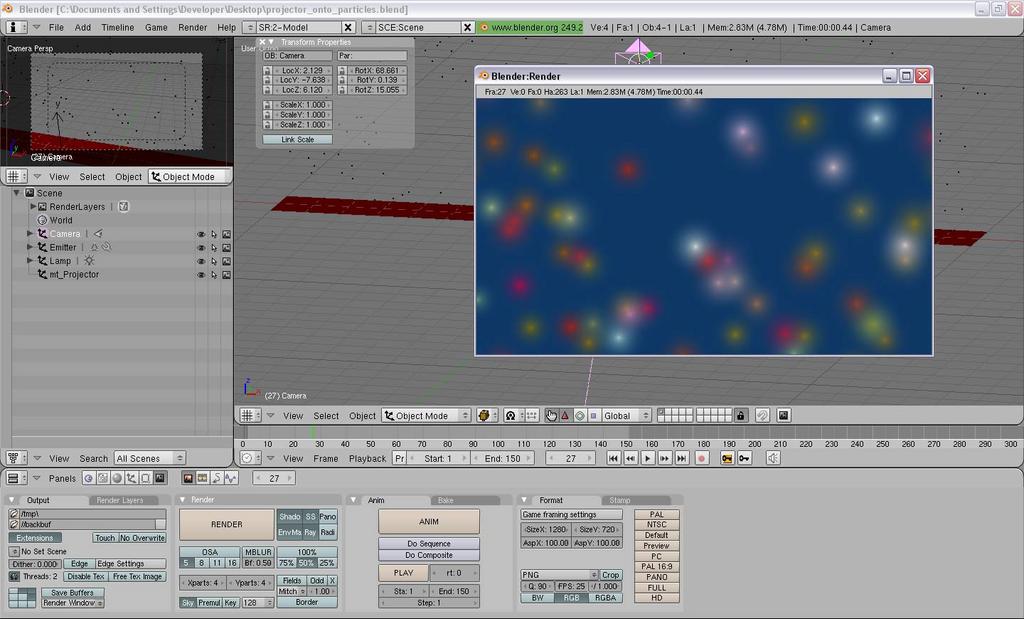 I can’t tell you how much I appreciate your help, thanks. I looked at your blend and recreated one of my own, but I still don’t see how the empty affects anything. I probably should’ve mentioned that I’m applying the texture to the particles as a halo, and using the halotex and alpha buttons. Maybe the empty doesn’t work in that case, because I still get the repeated pattern on the particles. Each particle gets mapped with the texture. I attached a blend of what I’m talking about.

I think halo may be the problem. I never use it because it has built in limitations. Try using a non-halo texture.

The reason I use halo is to get the particles basically not to look like particles. Without it, The just look like a bunch of sparks with the texture, so I run in to another issue. My goal is to be able to create smoke or a waterfall, so if you see all the individual particles, it doesn’t work.