This model is off of blendswap by Jokayo as a clay model. I did the texturing lighting and rendering and as always am looking for critique. 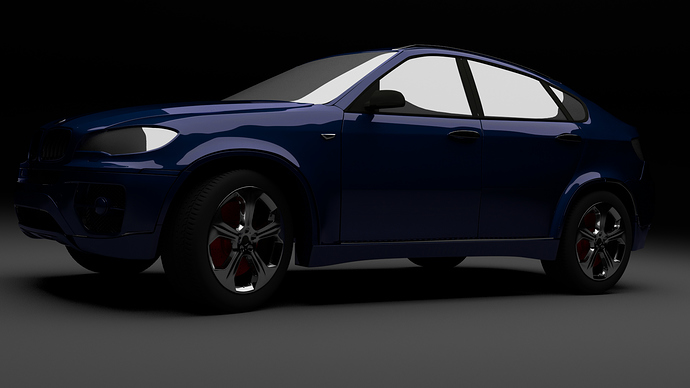 Looks promising… but it’s way too dark. (Lower the brightness of your screen.) Split the huge light into smaller squares. Fix the glass which is more like mercury right now and that weird angle on the front door, next to the corner of the windshield.

Do that and come back for another round of bashing…

BTW, you didn’t say which render engine you used.

You need to set up three-point lighting here to start with. Some lights coming from low (which would also be a good lighting-effect generally … makes it look sexier), to get good illumination of the floorboards in front of and on the side of the car, as well as to soften the shadows beneath. A fill-light is also needed on the rear of the car.

The light can’t simply come from your soft-box, bounce off the side glass and go straight into the camera lens. Probably the light needs to come from on top. I’m not expert on lighting a car, but there are numerous tutorials on the Internet (of course) that specifically address it. Probably you should locate some of their descriptions of where to place the lights and how intense to make each one, and start from there.

Later on, the issue of transparent glass … the headlights and the interior of the car (the latter of which does not have to be fully-modeled) will have to be dealt with, and this might be most-easily dealt with by means of compositing: solve the outside problem, then solve the inside problem, then solve the problem of merging the two together with creative use of nodes. (I do know that, in the old days of real film, interior/exterior shots were often done with double exposure … a pre-CG implementation of the same idea.)

Thanks for the critiques guys i have an updated version of the car coming.

Hey if you guys want to see the update its in the finish projects posts.