It’ll feature one of my fave characters from the x-men universe,apocalypse.

I’m currently in the look-development stage of production (rough storyboards are complete) which is basically a lot of concept art,playing with shapes,mood etc.

I’m scheduled to finish by the end of march next year.Theres no real “story” its going to be a lot like a game cinematic,where if you don’t know the character or about xmen,you will probably won’t get it,but as least you’ll have something cool to look at.

I started on some concept sculpts using blender dyntopo today,i’ll be making several of him with different design/proportions.I’m sculpting from some drawings I have done (i’ll post those another day)

anyway,can’t wait to share more art from this project and hope you guys like what you see as I update this thread.Also hope you guys can help me when I get stuck/need a bit of motivation.

The character ears are hidden,which is why they are stumps for now haha.Also the torus is just a placeholder

edit: same with dramatic lighting,just to see how it holds up.

Sideview,want to keep him rather box like to give him a more powerful look.

What’s with the torus around his neck?

Its a place holder for something i’m going to build later that goes around his neck.

I checked out your pics before reading what you wrote about them and recognized immediately who I was looking at. Apocalypse is one of my favorite X-Men super-villains.

I’m glad you recognised him hehe. I hope I can do him justice,he is just a complete badass lol.

I started retopo for that mesh,and decided I didn’t like some proportions,so I changed a few things,not much though,only the jaw is a bit more square.

I took my half finished retopo base mesh in multires sculpt,this is how he is looking.

As I get further into sculpting it will start to look similar to the concept sculpt in the first post (but better,hopefully)

En Sabah Nur – best X Villain ever. Would love to see an “Age of Apocolypse” live action or animated film

The interesting side thing with your retopo is that you could use it as a base for sculpting the head of another marvel comics “big bad”, Thanos , the facial proportions (small nose, large and low mouth, square jaw) are roughly the same as in your Apocalypse base in most illustrations.

@ sanctuary yeh thanos and apocalypse are pretty darn close,thanos is gunna be in avengers 2.I will round some things off to make it less thanos like.Perhaps taper the top of the head closer to the concept sculpt.It will be somewhere between the initial concept and this new mesh.

well after santuarys comment I decided to make some small changes to the lowres mesh before I go to bed,all I did was stretch the lip,made the eyes smaller,and lowered the brow.

I think this is closer to where I want to be.Not quite there though.

I added some temporary head apparatus to see how it would look.

I was going to originally have more realistic lips that merged with the apparatus,kind of like pieces of metal where merged into his skin,but I like this more simplified lips.so I might have to go back into the basemesh and add them within the facial geometry,not quite sure yet.

I used to read a lot of x-men comics. I loved the Age of Apocalypse arc so it seems a bit sheepish for me to admit that I never noticed he had such a small nose. I thought you had made a mistake so I googled some pics and there its was. I never noticed that small nose. The sculpts look pretty good so far

I’m think or perhaps making the nose slightly bigger,what do you think?

i’m really not sure at this point,it has to work for animation too.I’m gonna have to build a temporary body to see how it all relates.

It looks very close to the illustrations of the characters with the temporary head apparatus.

For the nose size, i think it depends on the style you want to emulate, as various comics artist have made more or less obvious changes to the proportions.
By example if you want to see what it could be with a more human sized nose, you could look at some Jae Lee cover for the marvel books that featured the character :

Thanks sanctuary,you are right,It leaves me in a bit of a pickle,because I think i’m aiming for semi-realistic,so I can get away with some exaggerated proportions.I don’t want to take it the point where he just looks like the average human.The jae lee version takes aways the “unf” of the original design.

Nose is teenie in this depiction 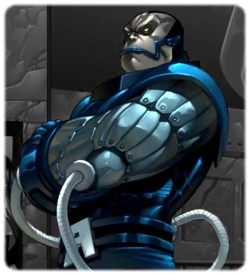 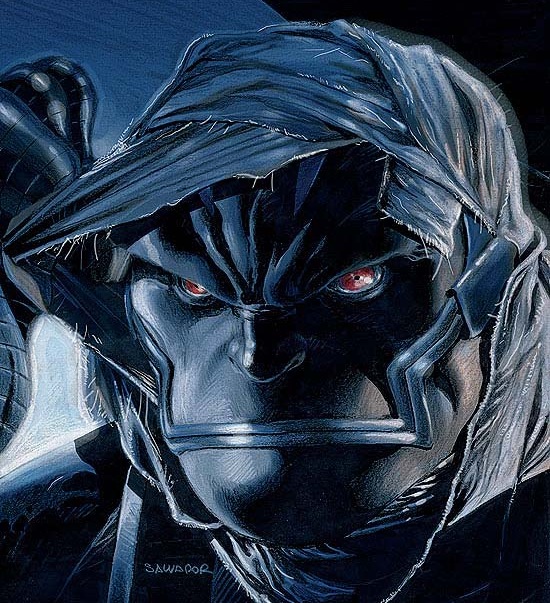 I did some liquify in photoshop,to inflate the nose,lol.for subtle differences…

added some basic mesh to give me an overall proportion of the upper body,I don’t think it looks too bad actually.

i’ll stick with basic geo because i’ll probably end up doing the suit in dyntopo.

the whole neck area needs to be designed in a way that he can move his head without intersecting the geometry during animation.

he doesn’t have any drastic movements in the short anyway,so I think it’ll be ok.

Before I go any further…I will take this into photoshop and will be using it to make some proper suit designs.I don’t really like guess work when it comes to modelling,I prefer to work from images.
if you guys have any opinions I would love to hear.

next i’ll do a basic head concept in dyntopo for the character archangel.

You could try to use the skin modifier to build the base body, then in Dyntopo build the shape of it up too.
Though as the body of the character is an armor build of separate pieces, there wouldn’t really be a need for a full body base.

i’m an idiot,completely forgot about skin modifier.I could have used that just to see a temp figure.Infact I still can.I’ll do one tonight.

I never used skin modifier yet,so i’ll take the opportunity.Although like you say I probably won’t take it further than a basic figure.Retopogizing all those Armour pieces doesn’t sound like fun,i’d rather just poly model em from the start.

the armour I plan to do is going to be a lot more complex than his comic Armour.

Gunna get some more time to work on him this weekend.Still working on the Armour design,hopefully I can be done by sunday.

I need some advice though.Obviously eventually this will be rigged for animation.

I’m not sure hot to handle the face,i’m talking about his mouth/lip apparatus.

Should I model the lip apartus (blue thingies) as part of the facial geometry?,or should I keep them separate from the facial topology?

I would then have to rig the geometry seperatly so that it moves with the actual mouth? any advice resources for that type of thing,i’d imagine it would be similar to rigging something like an eyebrow on a cartoon character.

need to figure it out before i can progress further.

I have decided to start with a still just to get something done,and then continue with the cinematic at a later date.I’ll probably be using cycles as well,and maybe BI for SSS,but I might fake it in cycles.

hope to get some advice.