Mesh Filter menu button could be added there if there are any higher level setings for it.
Other higher-level stuff can go there too if it is possible to condense it to button+dropdown menu.

I’m still a big proponent of UI customizability: activating a UI edit mode where you can drag and drop buttons, sliders, panels etcetera to your heart’s content.

Several attempts were done in the past. All of them were flatlined down, in the name of the pipe dream of the “best UI possible”. I believe only when Ton retires from BF, customizable UI can be a possibility. Until then, it’s waiting game.

For now, knowing your way with Python is the only alternative to customize some panels, to a certain degree.

But creating your own menus and buttons on the toolbar with python isn’t really THAT complicated (except for those expandable panels, those are annoying to create), it’s just that the code seems very jumbled up. All the toolbars for every mode are jammed into one giant “function” with a lot of “ifs” to show just the buttons needed for that mode.

That makes it hard to read, and hard to modify with an addon. I tried to make a simple addon to override the sculpting toolbar with my own, but I ended up overriding the toolbars for EVERY mode, because they all share code. I think that’s why every addon shoves it’s interface into the N Panel, because that one is very modular.

Mesh Filter menu button could be added there if there are any higher level setings for it.
Other higher-level stuff can go there too if it is possible to condense it to button+dropdown menu.

The mesh filter is a tool, so that goes into the lower toolbar.

I guess it makes sense, but that leaves a big ol’ bald spot in the sculpting toolbar:

Any ideas of what to fill it with?

It could have a search field. ideally to search commands and help.

A concurrent option would be also to drag-drop there the plugin files to install, making the instalation easier.

Yeah. Currently, the best way to create a semi-custom UI is using Pie Menu Editor. But I’d love to see full UI customizability as a core Blender feature some day.

I would like to have an easier, quicker and more intuitive way to load and switch brush alphas/textures.

I don’t wanna make another thread about funding so I put my few thoughts to close it.

The only thing I don’t like about main Blender development is the lack of response to the community demand - I’m strictly talking about rightclickselect that is actually dead (hundreds of duplicates, many not possible to do, many resolved but not tagged/closed). I wish that there was an official response to the highest demanded features.

The best thing that I can imagine would be an official page with a one-time payment for a specific feature. That money would go to the whole fund pool (like before) but at least Foundation would know where they can do something and the community would stop whining on blenderartists

Also, people LOVE looking at statues like “In Development”/“Done”/“No possible (because…)”. Of course, it would require some work like moderating. 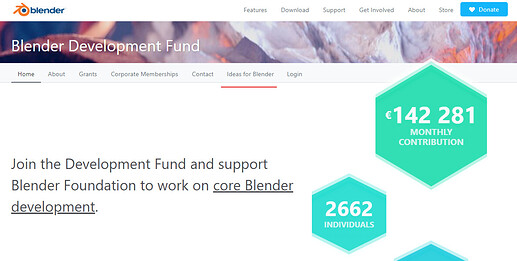 I don’t expect “only community” driven development (that would be bad) but that additional thing that would bring people even closer to the small part of building Blender better and better.

I’m aware of issues with unofficial funding and that’s another history.

The only thing I don’t like about main Blender development is the lack of response to the community demand - I’m strictly talking about rightclickselect that is actually dead (hundreds of duplicates, many not possible to do, many resolved but not tagged/closed). I wish that there was an official response to the highest demanded features.

You have to understand that Blender’s community is made of probably millions of users.
And facing that, there are only a few dozens of Blender Foundation/Blender Institute employees.

To collect more feedback, they multiplied their channels of communications (mailing lists, chats, social networks, communities forums, devtalk forums, developer.blender.org, right click select).
So, developers can reply to specific demands on as many channels.
If you posted a demand on one channel, answer probably already exists on another one.

There are several sources of global information about development (code blog, open movie blog, developers meeting notes, youtube channel, conference).
But most of the time, a developer only has time to reply only on channel he choose to look at.
Most of his time is supposed to be dedicated to development, not to community management.
At least, Pablo Vasquez is doing one hour of livestream per week. (30 minutes of presentation of new stuff + 30 of Q/A session)

I’m not demanding from developers to abandon their work on bugfixing. Also I’m talking about a proposition so it can be discussed any time and it shouldn’t be related to bugfixing time at Blender HQ.

There are managers and coordinators (Dalai, Francesco), and Head of Design and Communication (Pablo), and in the end - Ton as a chief. I would be really happy if this message would be considered by the people that I mentioned because I think it really would help in communication between the community and devs. There are big pros of this solution: people would be more willing to donate and it would cut much unnecessary spam about those same demands (countlessly posted EDIT MESH MODIFIER proposes…).

Aside from demand-driven donation - a page with currently developed tools, patches etc. also would be great. Similar to the road map but better because that old one was harder to modify and not so visible to the community. 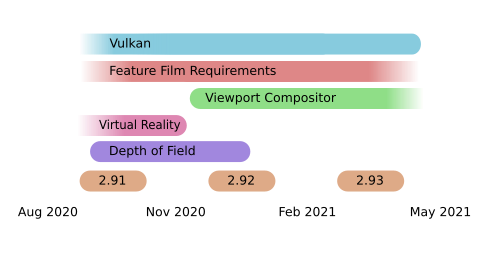 I think the idea of paying (donating) for specific features is a good idea.

I would be in favor of this proposal.

I think, as you said, it could increase founding.

But at the same time, the only concreate example I can think of is LuxCore render.

@jacek007g I think there is noting stopping us to make something similar for Blender and see how this goes.
Only, there need to be some kind of promotion going on. Or people would never know since it’s not official.
But as mentionned by @Lazydodo, there is no official intention from BF to take this route.

I seriously doubt anything will be done in that area until after the Geometry Nodes system is expanded to be able to almost replace almost every current Generate modifier (which is another thing that might not 100% happen).

Hello people)… Question from me. Was speak that sculpt merge with master in october. Plan changed?

Joe added a great Auto Face Set feature to Sculpt Dev branch.
It is a brush setting that allows to add faces sculpted to an existing or a new face set.
It is so practical to just precise index of Face Set you want to paint ; that I don’t understand why it was not the way Pablo did Draw Face Set brush.
And it is terrific to have such feature working with Dyntopo to add newly created faces to a Face Set.

Thx for the input. That is great

I guess it’s time to bring back the ability to sculpt and vertex paint at the same time too…
Why was this feature even removed? lol…

That is something i need for my current project. So yes please!!

It was removed simply by the fact that Pablo created a dedicated Paint brush (with common settings, you can expect from a brush colouring a canvas).
First attempt of Pablo was just a simple color setting for all brushes without Blend Mode, Flow, Wetness, Density, without an opacity decoupled from sculpting strength.

Did the fairing brush make it into master before Pablo departed?

I have downloaded the 3.0 alpha, but can’t seem to find it.