I could not resist making a new model today, I have to make final changes in the porsche, but anyways

here is the progress on this Mini-Cooper

thanks for watching, comments are appreciated

You should try the new mirror modifier to make the mirroring seamless. It should be the first mdifier in the stack, above the suburf one.

As for the model it looks good, you are on the right track.

wow that mirror thing surely makes stuff a lot easier, I have to admit except the particles I havent explored the new features much. Thanks for that cipix

here is an update on the model with transp windows

Well - at least you should read te release notes and explore the new modelling tools added in every version - they make modelling easier and more elegant with every version, escpecially the loop tools.

ok people, here is an update
I was very eager to get working on the model again all the week. I have done some detail work and now finishing the outer ends. 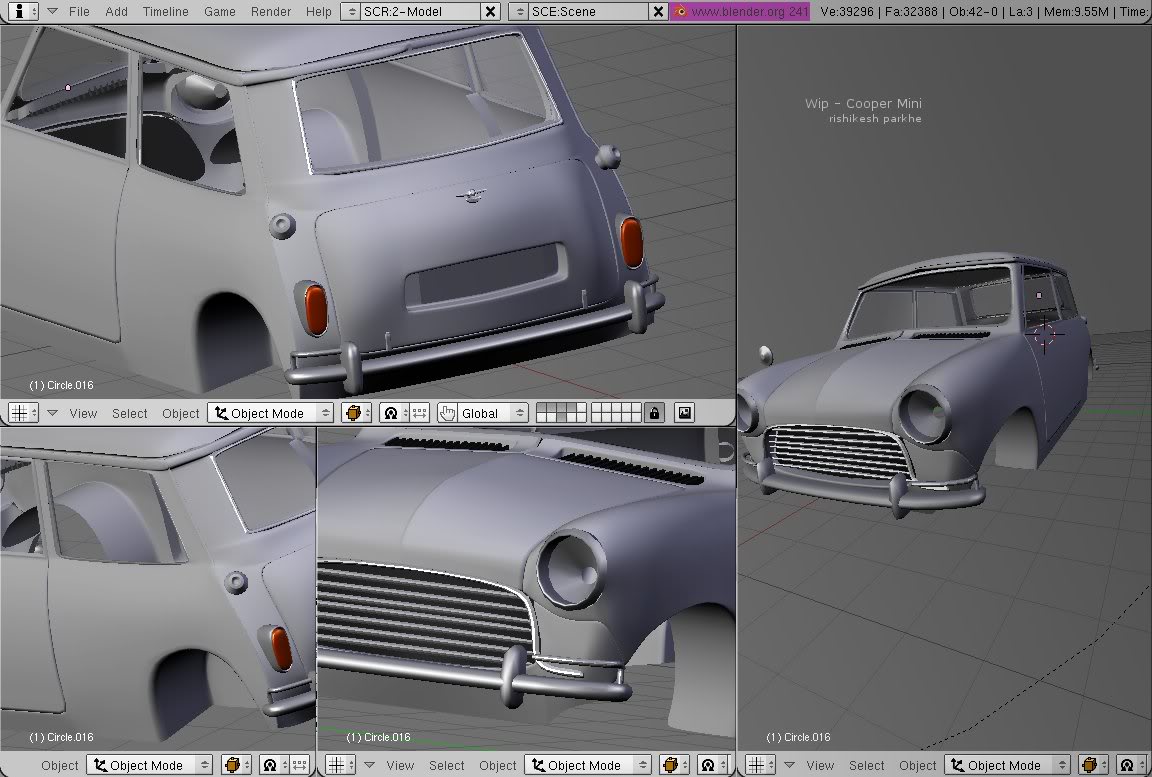 and here is a wire …

comments and crits are appreciated

ok quick update on the car, the details almost done… except wipers

and now a render

comments and crits will be appreciated
cya people

Very nice!
But is isn’t a Mini Cooper

Yes it is, he is doing the old mini cooper not the new one.

I’m working on the mini cooper, too (the old one - look in my signature for link) and yes, it is indeed a mini cooper that one!
The old one is made by Austin, and the new is made by Mini.

thanks for the comments guys,

NickDeBinkNL : yes but I am making the older one, I guess it has a prefix to its name.
Tuggles: thanks for the comments, yes I am goin to make some texturs for this one

Tjeiken: thanks man, your car is looking cool too, you should render it now.

c ya with the update fellas

ok guys I think I am almost done with the outers now
and I think I will keep this render setup for this model, although various angles and colours to come

very very impressive. clap clap
and - in the 3d window, how did you make it show as transparent??

Thank you arcticsnpr, for your reply bow
I came to know about the transp option from cipix while doin this project itself :D, it is in the <Object-Tab> trasnsp button and you select the required value.

that render was a low quality one and the dof was done in Gimp. I still have to work on the interiors, nice woody driving wheel, brown leather seats, ohh …

dont know what it is, but it looks like a toy, or a very small model

hey j,
There are no headlights/ tailights at the moment, I need to work them out yet.

CornDog, I think it maybe because of the lack of interiors and the setup I guess …

CornDog, I think it maybe because of the lack of interiors and the setup I guess …

I reckon it’s because of the DOF

I think that it’s partly the chrome parts. They look little jaggy. Looks like a toy car with a bad moulded grill. Also the DOF looks a little skwiffy. It looks like a vignette(ish) with an oval blur and doesn’t blur out “depth” (See the drivers side rear for details).

I would be interested to know which environment/probe you are using. I can’t get past the square of light on the drivers side of the bonnet. It look like it’s a window and also serves to make the car seem like a toy (Inside someone’s kitchen) It looks like the modelling is being let down by the post processing a little.

On a positive note, the model is really looking nice. Topology seems to be tidy and the shader for the paint works really well. It reminds me just how nice those motors look. (Not that I’d ever buy another one). I’ll be really interested to see how this progresses.
Good work.

dont know what it is, but it looks like a toy, or a very small model

I second that. I think it’s because of the blur there.

Maybe apply a HDR-image or something?

Alex_G: I agree that it maybe because of the DOF, its not technically right (I made it in gimp).

chimpoid: hey, I think you’re right, I have used a weird setup here, the light probe that I used was the ulfzi_probe* something. I wanted to somehow render with HDR image as the world, but the world not showing in the final render. I guess that will work here (anyone know how to do that ?) I will get some true reflections then. In my setup the backdrop is close the model, I think if I shift it far away, it would look realistic.
Thanks for the comment.

postlogic: Thanks for replying. I think, its a combination of three, lack of interior details, weird DOf, and weird setup(including the world settings).
But this is not the final render, it was a test to check the setup, there seems to some problems, but surely I will take care of them in the later renders.