the "definatly /not/ a cat-girl"-motivational thread

I started using blender several weeks (months?) ago, and just decidet it would be time to stop following tutorials and get serious. Well… this is what i’ve come up with. As i already this is more or less my first work that will recieve a little more attention from me. Plans are to fully texture/rig her and try some animation. So far no references were used for the actuall modelling part. Got some scribbles here at my desk though.

I just finished the ear and fixed some flaws on the face.
Connecting the ear proves to be more difficult than i thought… i dont really know where to go with all those loops 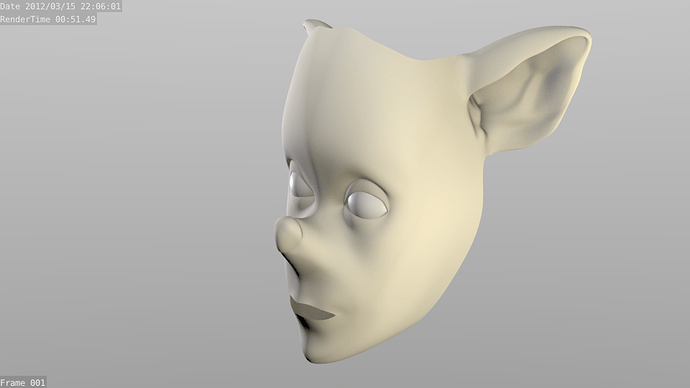 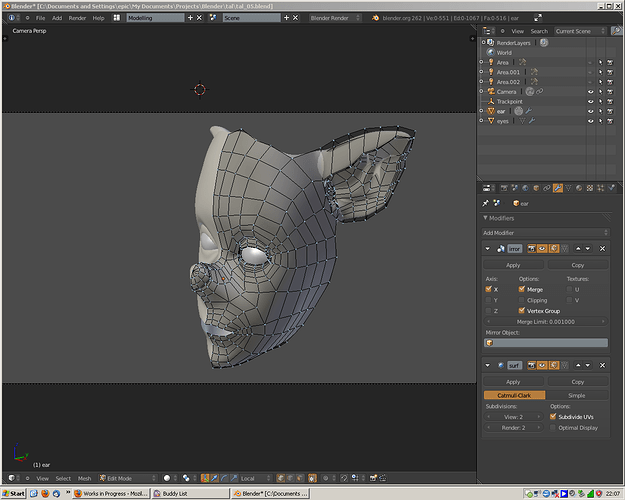 I’d say the 6-poles next to the nose need to go away, and work in a loop that runs from near the corner of the mouth to up above the nose. As it is now there are two loops coming down from the top of the nose. One runs off across the cheek, and the one below it get mucked in that 6-pole, then dives into the mouth. I don’t know the character… don’t know what direction her head might stretch… But I’d rework that area if it was me… And then I’d stretch her head that direction.

EDIT: I attached a couple images to try to illustrate what I’m saying. First is a head that shows a secondary loop that branches off the mouth loops and butts up against the eye socket loops. It allows the cheeks to work separate from the nose and provides that crease when you lift your cheeks and squinch your nose.

Second is an image of some subdivided poles. The edge loops kind of get twisted around the 3-pole. The 5-pole is bearable. But look at the 6-pole(and any greater), they just turn the edgeloops around, and the geometry stretches away from them.

Remember, any time you make an n-gon, the subdivider makes an n-pole. And for those who are confused, 3-poles aren’t n-poles, they’re Y-Poles… I mean Duhhh!.. Look at it!

s12a: that definatly helped, thank you very much

BentFX: I tried, but i feel like i messed up more than i did good xD I really have no clue if thats an improvement on the topology or not. 5-pole better than 6-pole? If so, why? In generall better deformation-properties? Should i get rid of the 5-pole as well?

…by the way… is it just me or does it look more like a bat than a cat? xD
Good thing i dont really care. I just want to learn animation. Be it a cat /or/ a bat

Edit:
Thank you very much

Couldnt sleep till the head was done. I think (except for some minor touchups) i will call it quits on the head for now and move on with the body tomorow.
Interesting development. Started as a wannabe-catgirl, looked like a weird mix of bat and dog in the middle, and right now looks more like a humanized baby-pig… i wonder were this will go

BentFX: Again, thank you very much. I will definatly look through this.

dasKraftwerk, If you haven’t seen it, you might check out Lackadaisy Cats. It’s a 2D comic strip about cats with guns. Tracy J. Butler has put out a lot of great material besides the comic. I think her Expressions Tutorial is an absolute must read for anyone who wants to animate things similar to faces. About half way down this one is a profile of Ivy. She’s my Fav! And she may in some ways be similar to what you had envisioned for your bat/dog/pig/not a cat-girl.

dasKraftwerk, If you haven’t seen it, you might check out Lackadaisy Cats. It’s a 2D comic strip about cats with guns. Tracy J. Butler has put out a lot of great material besides the comic. I think her Expressions Tutorial is an absolute must read for anyone who wants to animate things similar to faces. About half way down this one is a profile of Ivy. She’s my Fav! And she may in some ways be similar to what you had envisioned for your bat/dog/pig/not a cat-girl.

I’m not the thread author, but this is very informative, I bookmarked it, thanks!
As a sidenode, I see much Disney/Vilppu influence in the expression studies.

Just started the body and making good progress. I hope the edges till now are at least beareable. First time modelling a body poly-by-poly btw. 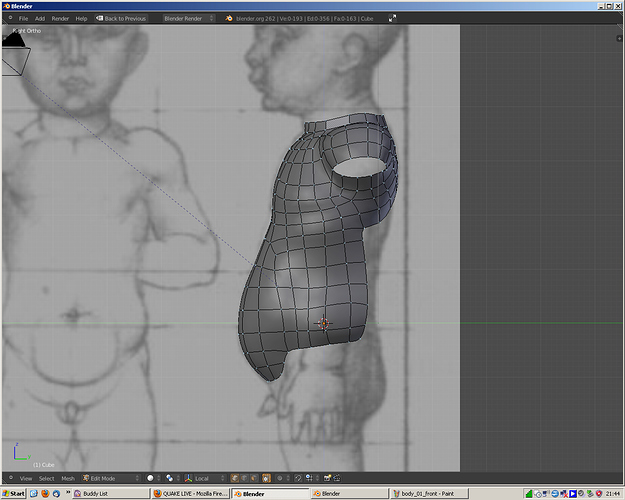 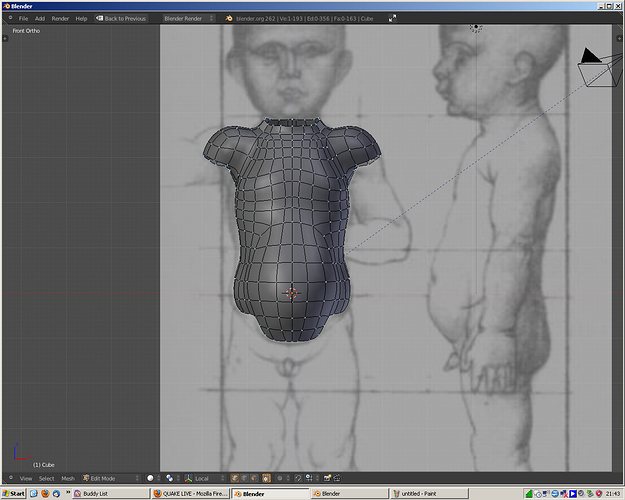 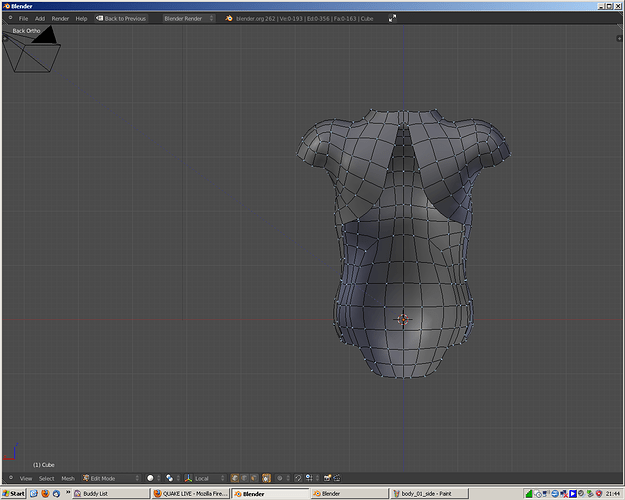 BentFX: Ive seen it, but since i dont really have a strict concept, i figured i would just continue modelling this… thing… and watch how it will work out. But of course this is /great/ material nontheless, and i will definatly be refering to it on my next modell.

The expressions-tutorial is really awesome.

Edit: And yes, I obviously changed his gender. Just a little more adjustment on the head so that he doesnt look /that/ androgynous. Hope this works out.

I have some concerns about the loops on the shoulders. feels like there is missing one going all around…

Accidently deleted my body-mesh, so i had to start allover

But at least its complete now, and already connected to the head.
I really hope i can get those lips fixed… 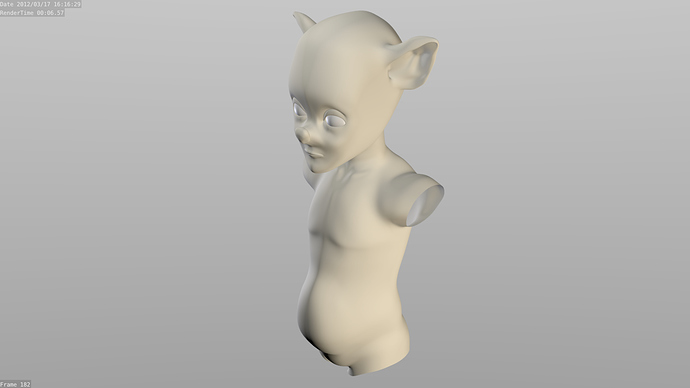 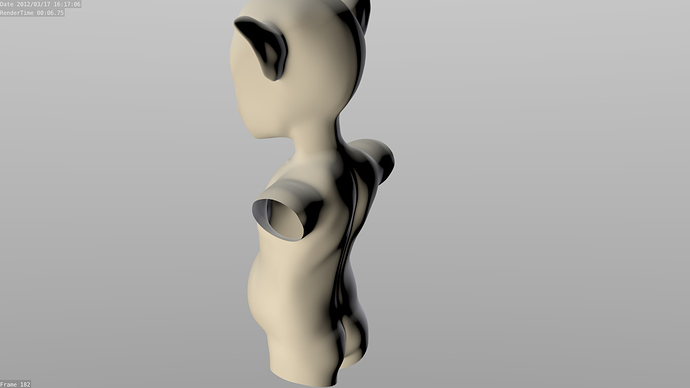 I obviously changed his gender…

Accidently deleted my body-mesh, so i had to start allover

I strongly suggest you to always save your work to a new file each few dozen minutes and before important modifications. There’s already a facility built-in in Blender for this: the + and - buttons near the filename box in order to progressively increase its number: In the picture above, for the project you can see in my avatar, I used many files for safety purposes. I highlighted in red the buttons to automatically increase the filename number.

s12a: Thank you. I already know that, and i use this feature

But the first run on the body worked faster then expected, and in the end I saved my render and for some reason thought it was the actuall mesh xD

Yes… this whole project here tends toward interracial genderbending. I just thought about giving him horse-legs to make him look like some kind of Satyr or something. Well, we will see.
Im so far away from my original concept that it really doesnt matter anymore xD

@s12a, Thank you! I knew that incremental saves had to be hidden somewhere. That’s where I was messing up… It isn’t hidden.

@dasKraftwerk: Interracial??? I knew we were going interspecies. But interracial crosses some kind of line doesn’t it? (Not that there’s anything wrong with that)

ctrl + shift + s => numpadPlus => enter
Works like a charm, but if you think you saved your project, but actually just took a picture thats of no use either xD
Currently working the hands. Still thinking about what kind of legs to put on this guy

Canceld the hands for now… just cant get them to fit

BUT i continued with the horseleg-idea.
Its still a bit “bumpy” here an there, but i think it kinda fits the character. Could be a little thicker though… well… tell me what you think about it

Made a quick turnaround yesterday. His butt looks a little odd and i still cant get the hands the way i want